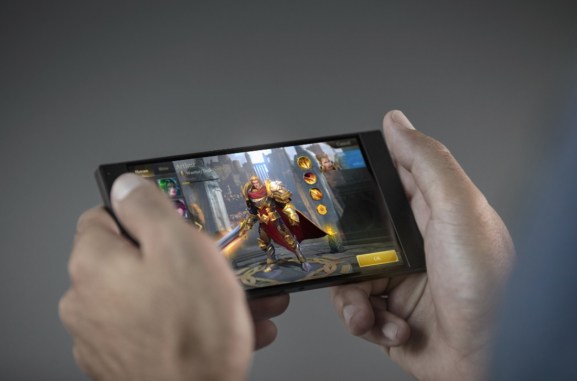 The Razer phone is designed to handle high-end mobile games.

Razer is always trying to present itself as something much bigger than a gaming-peripheral manufacturer. The company wants to establish itself as a lifestyle brand for gamers. That has led to its broadcasting products, a suite of awesome laptops, and more. But no piece of technology is as ingrained in our lives as phones, and now, Razer is selling one of those as well.

The Razer Phone is the “smartphone for gamers,” according to the company. And I actually buy that pitch. That doesn’t mean I think it’s the best phone for mobile gaming. Instead, I think the Razer Phone embodies a recent trend where certain product categories get better when the gaming audience starts to pay attention. When companies like Razer build something for “gamers,” they know that is going to attract a savvy, discerning audience that can often see through buzzwords. For example, livestreaming video and rich communication only came into their own when we got Twitch and Discord, respectively.

After using the Razer Phone for a few days, I think it has three specific aspects that a gaming audience will appreciate and everyone else will benefit from. Let’s get into those right now.

This is the marquee feature of the Razer Phone, and I understand why the company thinks this will grab people’s attention. The display has a 120Hz refresh rate, which is twice as fast as most other phones. It also has a 2560 x 1440 QHD resolution, wide color gamut (WCG) support, and something called UltraMotion.

The fast refresh rate means that navigating the phone’s menus and the web is always butter smooth. The 2K resolution gives you a sharp image with deep colors from the WCG. And then, UltraMotion does its magic and ensures that the screen only ever refreshes as fast as the system is rendering frames. This is exactly like Nvidia’s amazing G-sync monitor technology that eliminates screen tearing.

It’s also a fairly bright screen that handles all kinds of media and content with no issues. I love reading the web and watching YouTube.

This display is one of those things that sneaks in a lot of ideas that a general audience wouldn’t care about, but people coming from gaming will appreciate. Gaming is one often the only content that supports a framerate higher than 60, so a lot of people will find the 120Hz screen appealing. And then, UltraMotion bringing G-sync-like tech to smartphones, and that’s something a lot of people will love. Nvidia’s display tech and AMD’s FreeSync equivalent offer huge improvements to the gaming experience on a PC, and now having that on the display you may use the most is huge.

While the screen is Razer’s selling point, its speakers are just as shocking. Like the display, we get these speakers because the designers had gamers in mind. The company wanted to put bezels on the top and bottom of the display, so people could hold the phone for gaming sessions without having to hold the screen. Razer used this as a chance to put stereo, front-facing speakers into the handset, and they are impressive. Above: The Razer Phone and its amazing speakers.

These speakers are so loud and clear that I find myself wanting to watch content on the Razer Phone just because it’s going to sound so good. The quality is hard to convey in text, but if you get a chance to try this device, you should go to the Dolby setting and play the Atmos demo. This minute-long snippet features lifelike rain and a bird flying around your head. The speakers are so loud that they can project the sound out and around you to simulate that 360-degree, positional audio.

I run hot and cold on Razer’s aesthetics. Some of its mice are too much for me, and I don’t love its three-headed snake logo. At the same time, I adore the look of its Blade laptops and many of its headphones. From a visual-design standpoint, the Razer Phone is mostly a winner. It has a very blocky body that easily distinguishes it from the soft shapes of the many iPhone and Galaxy devices out in the world. And the symmetrical speaker bezels frame the display in a way that looks really mature and professional.

But beyond the look, the functionality is also wonderful. The unlock button is on the right side of the device. It is also a fingerprint sensor. Coming from a Samsung Galaxy S8+ and its fingerprint-scanner on the back by the camera, this is a miracle of design. My thumb just naturally rests on the sensor, and you can physically press it.

The intelligent button placement carries over to the volume rocker. At first, I thought these buttons were way too low, but it turns out that I was just always used to having to use a second hand to adjust the volume. But Razer placed them so they fall right under your middle finger when you’re holding the phone with just your right hand.

I think everyone will appreciate those elements, but something I love is that Razer built the best PC gaming phone ever. I use the Android app Moonlight to stream games from my desktop to my smartphone, and that has caused problems in the past. Primarily, volume or power buttons tend to get held down by the clip that holds my phone to the Xbox One controller. But the blocky body of the Razer Phone actually creates a gap where the clip doesn’t activate those buttons — even when it’s right on top of them. And then, you have the front-facing speakers blasting crystal-clear game audio at you. It’s a really solid experience.

Is this for you?

I’m going to have more thoughts and videos looking into the Razer Phone over the next week. I’ll talk about some things I don’t like, and then, I’ll try to have a full review after using it for about two weeks.

For now, however, I’ll say that I can see reasons to get this over just about any other Android phone. I think if you are already committed to iOS and that ecosystem, maybe the iPhone X with Dolby Vision is going to work out just fine for you. But let me spend some more time with Razer’s device, and I’ll report back with my thoughts soon.