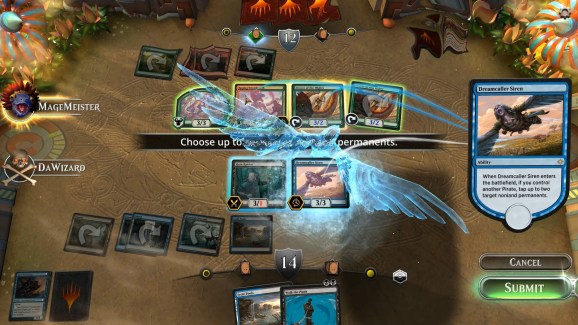 Welcome to the Arena -- the Magic: The Gathering kind.

Wizards of the Coast announced today that Magic: The Gathering — Arena’s closed beta will begin on December 4. Magic: The Gathering is the king of physical collectible card games, but its digital versions are behind Blizzard Entertainment’s market-leading game, Hearthstone. Other digital card shufflers, like Gwent and The Elder Scrolls: Legends, are also enjoying a market that research firm SuperData estimates will hit $1.4 billion this year. You can sign up for the beta here.

Magic: The Gathering — Arena attempts to make a Magic PC game that’s closer to the Hearthstone experience. The free-to-play game has all of the card’s in Magic’s Standard rotation, so players can enjoy the same experience that is most popular with fans of the physical game.

In an interview with GamesBeat, Wizards of the Coast noted that it wants to launch Arena with Magic’s Standard and draft modes, but the company wants to eventually release other modes.

The closed beta will give Wizards of the Coast a chance to test the game for bugs while being able to control how many people are playing. Players’ progress and progression will be reset after the beta period. Any money players spend on cards will be refunded via in-game credits.