Microsoft opened up its wireless technology to peripheral manufacturers in September, and that means we’re getting a wave of new gaming headsets for the Xbox One. Turtle Beach is one of the first companies jumping in, and I’ve spent some time with its Stealth 600 and 700 devices that work with that console as well as PC and other Bluetooth devices. These headsets are both familiar and different, streamlining audio and communications for Xbox One fans who grumbled about optical cables and USB dongles.

Microsoft keeps updating the Xbox One and how it works since launching the console in 2013, but it has just handed over the keys to its proprietary wireless technology to outside companies. That means that you can connect the Stealth 600 and 700 to your Xbox One without having to plug in anything extra to your console. This saves you from having to dedicate one of the three USB ports to a single headset. Some also require you to plug in the optical cable to ensure you can get both game and communications audio, and the Stealth headsets can now bypass that step, too.

Setting up the headsets with the Xbox One is now like connecting a controller. Pressing the sync button on the front of the system puts it into searching mode, and then you can turn on the Stealth 600/700 and press its connection button, and the two devices pair together. The Xbox One will even recognize the headset and assign it to a user, so you can have multiple people all wearing different audio devices.

I wear a Turtle Beach headset every day while I’m working or gaming, and I find them comfortable. The Stealth 600/700 are no different. They both are light, with a snug fit around the ears. This makes them easy to wear for long sessions.

Both headsets also come with some crucial features that isn’t standard with all of their competitors. The biggest one of these is mic monitoring. You can hear your own voice when you speak into the microphone, and that’s a big deal because speaking clearly is difficult when your own voice sounds muffled. I’ll also appreciate that the mic automatically mutes when you flip it up and out of the way. Bluetooth is another big addition, and it means that you can use the headset with a range of other devices including your smartphone. 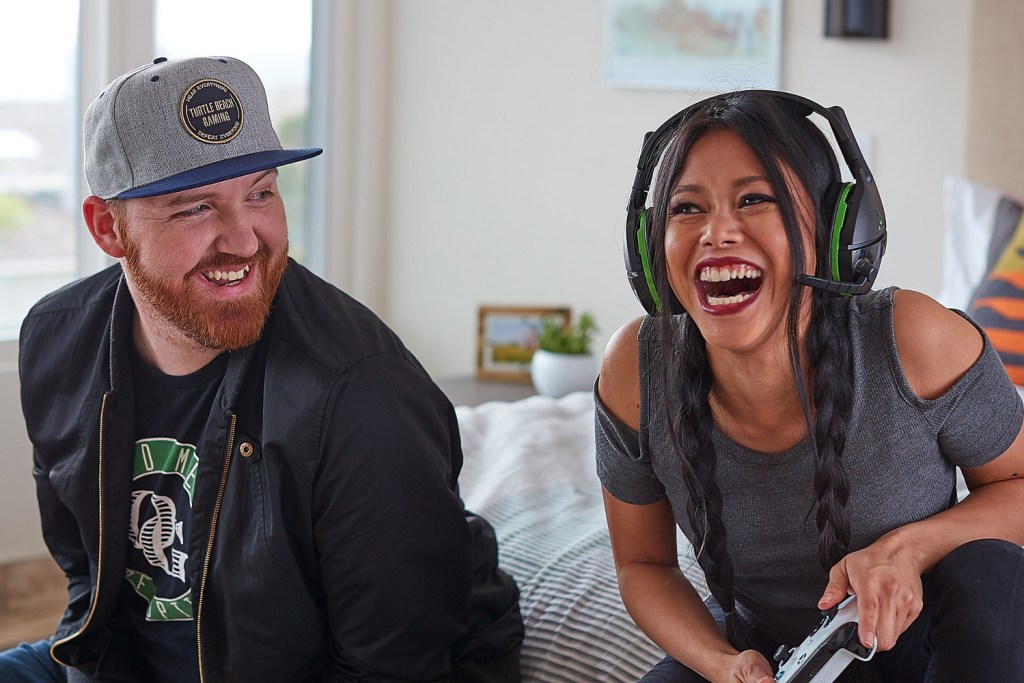 Above: The Turtle Beach Stealth 700 in action.

Some of the Turtle Beach-exclusive features include “Superhuman Hearing,” which turns up the audio around you to specifically highlight other players in a multiplayer environment. This works a lot better in some games than others, but when it does function — in something like Battlefield 1 — you do feel like you’re getting an advantage. And then on the Stealth 700, you also get active-noise cancellation. This is for single-player, cinematic games, and it does an impressive job of isolating your game audio from external distractions. Of course, this affects battery life, and the effect doesn’t really work when you have mic monitoring on.

I’m pleased with the audio in both the 600 and 700. Each headset can take advantage of the built-in Windows Sonic Surround Sound or Dolby Atmos technology of the Xbox One, which are positional-audio algorithms that improves the virtual-surround performance of games and film. That really came across in something like Titanfall 2, which has a lot of verticality. It was nuts to hear players fire at me as they jumped over my head. Dolby Atmos especially helps the Stealth 600/700 process the sense of height.

The 50mm drivers also pump out a thumping level of bass without eating into the mids and highs, which remain distinct and loud.

I’m 34 years old, and I have countless wireless devices that run on batteries. And yet I’m still not in the habit of always plugging everything back in when I’m done with them. If I haven’t learned by now, I don’t think I ever will — and I also don’t think I’m alone. What this means is that sometimes I will pick up the Stealth 600/700, and they won’t turn on because I didn’t charge them after my last handful of sessions. The 600 has a 15-hour battery life and the 700 lasts for 10 hours. That’s more than enough for any one or two nights of gaming, but the problem is that they don’t really come with a dock or stand that I can keep them in to charge whenever I’m finished with them. And something about plugging in a loose cord into a headset seems really annoying.

You’re not really going to use these with your phone

I’m glad Turtle Beach enables you to connect these headsets to your smartphone with Bluetooth, but they’re too much to use as your day-to-day audio headphones. The big thing here is that they don’t have a play/pause button, and the microphone doesn’t pop off. Instead, you end up with this dopey arm sticking off the side. With so many sleek headphone options, you would probably pick something else if you were looking for an all-around solution.

If you wanted a headset for your Xbox One, you probably already bought one. I don’t think you need to upgrade to the 600 or 700 if you already have one, but if you are looking to get your first headset, you should definitely consider these. They sound great, they save you a USB port, and they’re easy to set up. If you play a lot of games alone, then maybe drop the extra $50 for noise cancellation in the 700. Otherwise, the 600 should get the job done.

Turtle Beach provided sample units for the purpose of this review. The Turtle Beach 600 and 700 are available now for $100 and $150, respectively.