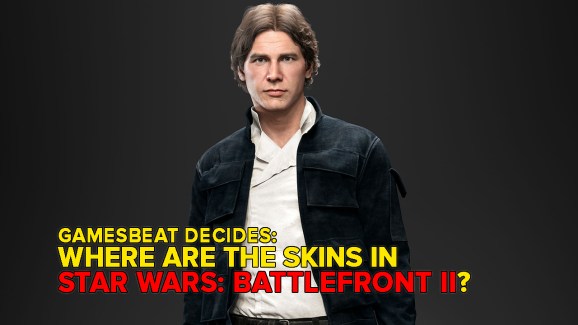 You can dress your Han Solo in a beard, and that's about it.

Star Wars: Battlefront II has emotes and win poses, just as Overwatch does. But while Blizzard Entertainment’s hit team shooter has plenty of costumes for your characters, Battlefront II does not. While different outfits — often called skins — seem like a great fit for this take on the Star Wars universe, Lucasfilm and Electronic Arts couldn’t agree on how to bring them into the game. On this week’s GamesBeat Decides podcast, hosts Jeffrey Grubb and Mike Minotti talk about this news and other reasons Battlefront II’s launch has had problems.

In addition to Battlefront II, the Decides crew talks even more about the new Star Wars game. But the episode also covers CD Projekt Red’s take on live services and how that affects its employees as well as Vivendi’s ominous promise to Ubisoft.

In the second segment, Jeff and Mike try to figure out what games they should catch up on before the end of the year.