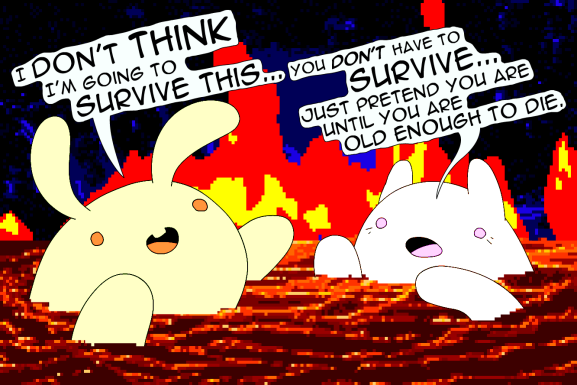 Nathalie Lawson's Everything is going to be OK

My game “Everything is going to be OK” was included in Double Fine’s Day of the Devs. Yay! I’m happy to get publicity for my game, and Double Fine’s public event for indie developers in San Francisco looked like a great place for that. This is probably the first time, outside of E3, that this game was shown to a more consumer based “gamer” crowd. People without knowledge of art games or the discourse around them. Basically, people expecting game-games, with goals, and magic circles, and in some way or another keeping up with the standards of game design. …

But my game, “Everything is going to be OK,” isn’t that sort of experience. It’s an interactive zine based on abstract life experiences about trauma, PTSD, and surviving difficult situations. By definition it’s interactive art that uses the game format as a way to convey these messages. It’s not necessarily a game in the traditional sense. Unfortunately, my experience at Day of the Devs indicated that game culture may actually be getting more antagonistic toward alt-games, and YouTubers may be at the heart of it.

What happened at Day of the Devs

I had some interesting experiences at Day of the Devs. It led to me already talking the ear off a friend with my venting, but I feel like it’s important to share these observations. When people ask me how it went I don’t like being critical of an event because I know how much work one involves, but I’ve been very transparent about how it was like working on this “game” so I’ll keep doing that.

The transparency is important to me because I want other creators that set out to make this stuff to be ready for this (it might not happen to you, it might be bad luck on my part, but just know it happens). I would hate to see people leaving alt-games because they had bad experiences, so they decided not to make games anymore. There is a place for our games. We have a right to be here. We just have to work hard on also carving out the space, and understanding, for them.

Before sharing more, I want to make clear that I’m not at all dissing Double Fine. I don’t want to be critical about this event. I love them. I loved the event. It was an honor to be there, but maybe (in retrospect) not that good of a thing for someone like me and the type of “game” this is.

The morning crowd was pretty awesome (press crowd). When the doors opened. the place got crowded really fast. People either really loved my game or didn’t get it, which is expected. Around 2 in the afternoon, when people started to bring their kids — usually teens — things started to get kinda hostile. They were pretty rude, and it got kinda unbearable, so I had to leave the area. I stopped hanging around the booth after that (I mean, I get it. The “game” doesn’t belong).

I occasionally came to make sure they didn’t delete the game from the operating system of the show PC. It wasn’t all like this, but it was enough to be hard.

I point this out because the rude stuff was totally in-line with how streamers and popular YouTubers talk about these games: “What the fuck is this, what the hell, weird-ass game, lol acid, haha who the hell would make this. …” You know, the default slew of mockery. This came mostly from younger people.

It hit me how much influence streamers and YouTubers have on public opinion of these games, and this is really becoming a problem. I mean, I know it was before, but damn. We should start talking about this, and some constructive criticism should exist toward how streamers talk about these games. I feel like this is a kind of pressure that’s building and it’s becoming unbearable.

It’s negatively impacting how people are able to talk about art games, or even be open to these more experimental interactive experiences. Screaming “what the fuck” and all the other standard jokes is not a good predominant attitude to propagate towards these “games,” or their creators.

I think this also damages the medium because experimental creators should not be shunned or ridiculed like this. We have a right to be here too! A lot of thought goes into making these games the way they are. A lot of thought also goes into making them different. Philosophies, planning, putting the art together exactly the way it is, making sure it functions in an unexpected manner. It’s designed to be this. We don’t just throw a bunch of bullshit together and YOLO (although yes, we do that too, ok guilty as charged, but still). This isn’t really a game. It’s art. It matters that it’s different. We want it to be different.

The popular dialogue around these games centers pretty much on the basis that they shouldn’t exist, and if they do they exist to be laughed at. Streaming kinda comes off as a publicly shaming them. It’s not constructive at all.

Running an event for alt-games

My feeling about this event, and showing something that’s “what the hell is this, who would make this, lol acid”, is that maybe if the event can’t host them properly maybe they shouldn’t include games like this. I’m so sorry to say that. I am so grateful that the game was shown there, and I’m honored, but I’m saying this because the creators get a lot of crap for this and this isn’t an easy thing to endure. Alt-games are different, and will be met with hostility. It seems like they represent something too many people believe shouldn’t be in games. They just should not exist.

These games, by their uniqueness, automatically have a target painted on their back. It’s really cool to ridicule them. Games made by women automatically do too.

I feel like some sensitivity, or understanding, that this will happen is necessary.

IndieCade does this so beautifully (speaking only from my experience, having had my work there a few times now). I mean, I was also at E3 with “Everything is going to be OK” and was already bracing for loads of hostility and it didn’t happen. People may not have “gotten” the game, but it wasn’t direct rudeness or hostility.

I feel like, if you’re an event planners showing games like this to a totally consumer-oriented audience, you have to prepare the audience for it. The setting and context has to be differentiated. You have to create a space that basically screams “These Are Art Don’t Expect A Traditional Game!” You have to make some kind of point that people have to be open minded. Create a space that encourages respect. I’m not criticizing the event. These are just my observations after all this.

I really love what Klondike did a few years ago at Screenshake. I may be getting some details wrong because memory, but they set up this room with their games on laptops, and there where bean bags everywhere (very indie), and it was a totally dark loungey area. The atmosphere was really quiet there. Like people actually whispered and they didn’t have to. Nobody told them to whisper. I was told they didn’t intend for people to whisper but that was the outcome. I’m not saying that events like Day of the Devs should encourage whispering (no, stop, that’s the wrong takeaway). I’m saying this because Klondike/Screenshake created an environment that had an outcome. It kind of directed people’s behavior in a positive different way. It might not be the best example, but right now it’s my one comfort-myself-with-this-example example.

My point is that: Wow, streamers and YouTubers have created a steadily growing culture where it’s kosher and a fun pastime to laugh at these types of games.

We should be aware that this is a problem (more than maybe we thought). I don’t know what to do about that. I really would like to encourage some constructive criticism toward Streamers and how they talk about these games. Just because some famous guy with whatever million followers plays it, this isn’t an “honor” or necessarily a good thing. It doesn’t really help sales, or exposure. The last time one did that I got a slew of hateful comments and email. It kind of hit me hard because this is also a personal game, and people will cater their attacks based on what they know I’ve been through.

The way streamers treat these games can be really damaging. It sets a precedent to how other people will be behaving.

This was originally posted at Nathalie Lawhead’s blog.

Nathalie Lawhead began as a net-artist in the late 90s. She continues to create experimental art today, exploring the game format as a medium. She is most known for her work on Tetrageddon Games. More of her work can be found on her itch.io page, or website.