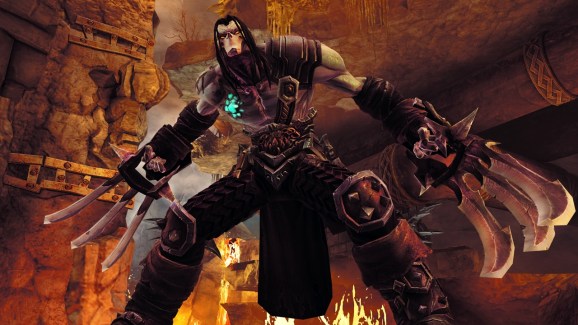 Death comes for everyone.

Your PlayStation Plus subscription may invite death into your home, but that’s a good thing! Here are the games that PS Plus subscribers will get at no additional charge and can keep as long as they maintain an active subscription to Sony Interactive Entertainment’s premium online service.

This action role-playing adventure puts you in the role of Death. You must explore huge maps and dungeons while also engaging in hack-and-slash combat. It was one of the last major releases from publisher THQ before it went defunct. In 2015, Nordic Games — which owns the Darksiders license — released an upgraded version for PlayStation 4, Xbox One, and PC, and that’s what PS Plus members are getting next month.

This is a standard movie-license brawler. I know it’s easy to dunk on these games if you’re a hardcore gamer, but a lot of families likely also subscribe to PS Plus. This is something they may really get a lot out of.

Forma.8 is a Metroid-style action adventure. You play as a exploratory probe in a connected, stylized world. This works with both PlayStation 4 and Vita.

Your PS3 is still getting PS Plus love in the form of this adventure-game bundle that includes both Syberia and Syberia 2. These are mysterious, cinematic adventures that  have players stumbling across bigger and bigger conspiracies.

This spinoff of the BlazBlue fighting games is a combination of a visual novel and dungeon crawler. It promises a story that branches and responds to your decisions.

Wanted Corp is a dual-stick arcade shooter that will have you taking on waves of enemies through various arenas.