Though most game jams have developers creating projects on a single theme, Games on Demand takes a different approach. Founder Lana Chircop and six other organizers are fielding requests from children with cancer or disabilities and giving them to developers to make those games a reality. It will run from December 1 to December 3, and folks who would like to participate can sign up on Itch.io.

Chircop is a game developer and user experience designer who’s participated in such jams in the past. She’s developed web-based dress-up games at Cosmic Girl Games, as well as the colorful mobile role-playing game Bioscape. The inspiration for Games on Demand came from a visit to a skatepark, where she saw a local group teaching sick kids how to skateboard.

“When we were at the skatepark, they said that a lot of the kids couldn’t participate because they weren’t in a physical condition to do so,” said Chircop in a phone call with GamesBeat. “But video games don’t require a lot of physical exertion. It aligns really well with this kind of thing.”

Though gaming-related charities like Extra Life and Child’s Play exist, there haven’t been any game jams for the express purpose of creating projects for kids. Most people’s efforts are around raising money, such as the 24-hour Extra Life live streams, or getting children access to games.

Games on Demand is primarily working with two organizations, Ontario Parents Advocating for Children with Cancer (OPACC) and the Holland Bloorview Kids Rehabilitation Hospital. OPACC frequently hosts events, such as the skatepark get-together, for children with cancer.

Events where kids can be kids

Susan Kuczynski is an OPACC parent liaison. She says that it’s vital to have events where the kids can simply be themselves. Activities like playing video games or a sport like basketball can be empowering and give them a much-needed creative outlet.

“We tend to put [the kids] a little bit in a bubble and say, you can’t do anything. That’s not actually true. They can do lots of things,” said Kuczynski. She added, “They’re just ready to play and ready to be kids and ready to do all the things kids want to do. Creativity, when it comes to playing a game on their console or just playing with their imaginations at various other things, I think it’s really important to encourage that and let them get at it. Their job is to be a kid.”

As a parent liaison, Kuczynski provides resources to help the families of children who are undergoing cancer treatment. Her own daughter is a survivor, so she can speak as a voice of experience. Part of helping parents navigate the overwhelming experience is to provide social opportunities along with little tips that can make the process more bearable.

“There are tons of resources even within the hospitals that families don’t know about,” said Kuczynski. “For instance, they can get laundry done. And staff may or may not know about those kinds of resources, but their primary concern is administering health care for your child. We’re there to help them find their way in those regards. We’re there to give them that hot cup of coffee or tea and an ear, and not being in crisis, so to speak, at the same time.”

OPACC has been promoting Games on Demand on its email lists and on social media. Kuczynski says it’s a promising event especially for older children, 10 years and up. While younger children can find escape in playing with toys and developing friendships with strangers, adolescents are more reserved.

“They rely more on the technology than the younger kids do,” said Kuczynski. “I think it’s something that really captures their fancy, too. They’ve probably been playing video games, or having technology in their lives, from the time they’re born. Having that opportunity to provide input on what it’s going to look like is—I think it’s a great way for them to have an outlet.” 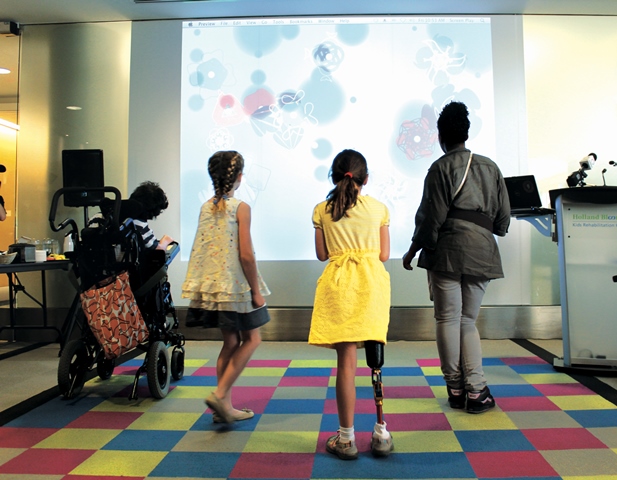 Games on Demand has received a few requests from the kids involved with OPACC. It’s also getting some ideas from the children in rehabilitation at Bloorview Hospital. Chircop says it’s also working with the Possibility Engineering and Research Lab (PEARL), the in-house research department at Bloorview that specializes in creating games for children with disabilities. With PEARL’s help, developers participating in the game jam can make their projects more accessible.

“[PEARL is] really excited about the idea, and they’re going to be providing us with some templates that we’ll be making available, where people can actually make games for kids who have physical disabilities,” said Chircop. “This can help them move in the right way, or use them in different ways, that kind of thing.”

Dr. Elaine Biddiss, a scientist and the director of PEARL, says that they’ve experimented with a number of things and have developed a number of games. One of their major projects, ScreenPlay, turns waiting rooms into an interactive experience. Children can play with it using pressure-sensitive floor tiles. The idea is to help kids cope with the anxiety and fear that is associated with waiting for their medical appointments. It’s also an alternative to conventional toys, like wooden blocks or puzzles, that can be an infection risk.

“Games On Demand, in their game jam, is likely going to design some more experiences to add to the [ScreenPlay] system,” said Biddiss. “Possibly things that might engage older youth that share the space with younger kids. We’re really excited about what they might come up with. That’s one possible project for the game jam.”

PEARL will be available to offer advice for developers participating in Games on Demand. Software engineer and lab manager Ajmal Khan says they also have a set of design guidelines for ScreenPlay that they’ll offer to the developers in case they decide to go that route.

The lab began in 2011 or 2012. It’s created games that use the Microsoft Kinect and Nintendo Wii, along with mixed-reality projects that combine virtual objects with real-world environments. PEARL’s in-house game developer Alexander Hodge is currently developing a music game with jazz artist Chris Donnelly, which will combine some educational aspects with mechanics that will help kids develop fine motor skills.

“The games that use musical instruments are just another component of the mixed reality system we’ve developed,” said Hodge. “That’s how you play those games, through playing with these common toy musical instruments. By manipulating the instruments, they’re working on their fine motor skills development, but we’re also able to leverage [Donnelly]’s expertise as a music educator to design the interactions in those games and promote early childhood musical education.”

“What we’ve found in the past is if you take a bunch of clinicians and a bunch of well-meaning engineers and you ask them to create games for therapy, they tend to be really bad games,” said Biddiss with a laugh. “By including the people who really know what they’re doing in terms of game development, we’re able to provide much better gaming experiences for kids. We think they deserve the best of everything, not just a boring computer activity that is trying to dress up a therapy task that isn’t really much fun.”

How Games on Demand works

The game jam will begin at 10 p.m. Pacific on November 30 and end at 4 p.m. Pacific on December 3. Along with Chircop, the other organizers are Ian Todd, Courtney Brennan, Monica Meikles, Flannery Jefferson, Leanne Ferguson and Terry Kerr. Developers can opt to participate online, or if they’re local to Toronto, a limited amount of workspace is available at the office of BiblioCommons, one of Games on Demand’s sponsors.

Chircop says that developers don’t have to adhere to many rules. The only two requests, aside from what the kids want, is that the game must be free and that it has to be playable on PC or Mac so that families won’t have trouble with software compatibility.

The way Games on Demand has been fielding requests is by asking parents to fill out a simple form with their kids.

“We tried to set expectations, so they understand these are just going to be simple games, not a big triple-A game or anything like that, just something simple,” said Chircop. “For example, it has things like, what would you like your character to be named? What would your character look like? Would you like to submit a picture or drawing? One request is a girl would like to have her bunny in the game. She sent a picture of a bunny with a name. It’s really adorable.”