I’ve been hopeful for the Nintendo Switch‘s prospects as a new home for Japanese role-playing games. I love the genre, and the Switch’s capabilities as both a home console and a portable make it the ideal platform for these games. Playing on a TV gives you a proper display for epic stories and large worlds, but you can grind through enemies while using the system as a handheld.

But the Switch has not had many JRPGs. Xenoblade Chronicles 2, which comes out on December 1, is the console’s first big test for this kind of game. And thanks to its fun combat, interesting setting, and deep progression systems, I’m convinced that the Switch has a great JRPG future ahead of it. 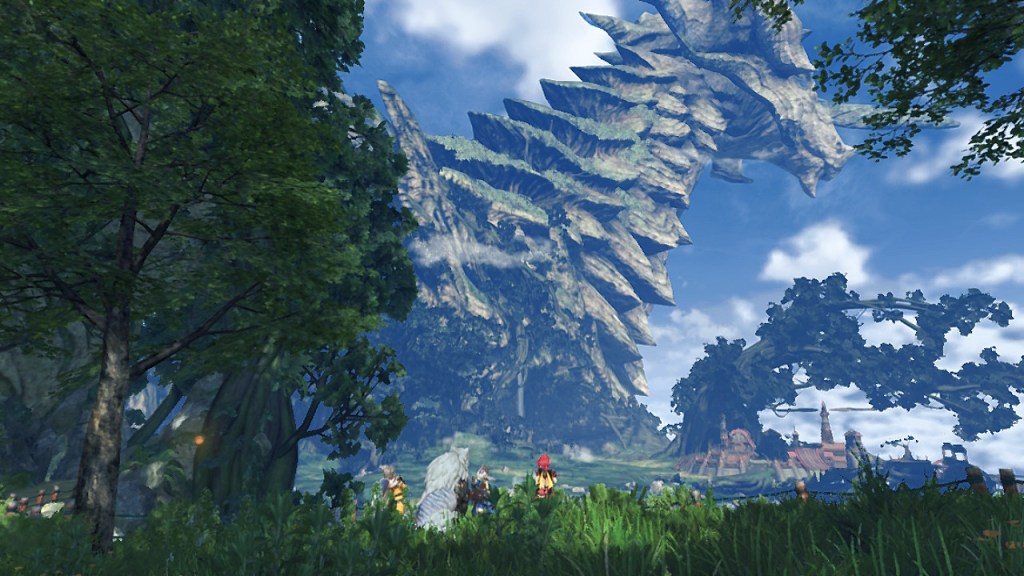 Xenoblade Chronicles 2 takes place in a world covered in fog, with people living on top of giant titans. It’s a similar setup as the original Xenoblade Chronicles, but this place is actually distinct and features new characters. You don’t need to have played any other game to understand what’s going on, which is a relief for someone like me (I only got about halfway through the original, so I’m happy this isn’t a direct sequel).

The world is Miyazaki-esque, with plenty of airships and large, magnificent creatures strolling through open plains. Like other JRPGs, it mixes elements of steampunk with traditional fantasy fare like magic. But having major locations set on the backs of giant creatures makes things more interesting. Xenoblade is its most magnificent when you’re strolling open areas where parts of the titan, like its head, are moving in the distance. Beautiful music helps sell the wonder of the world. 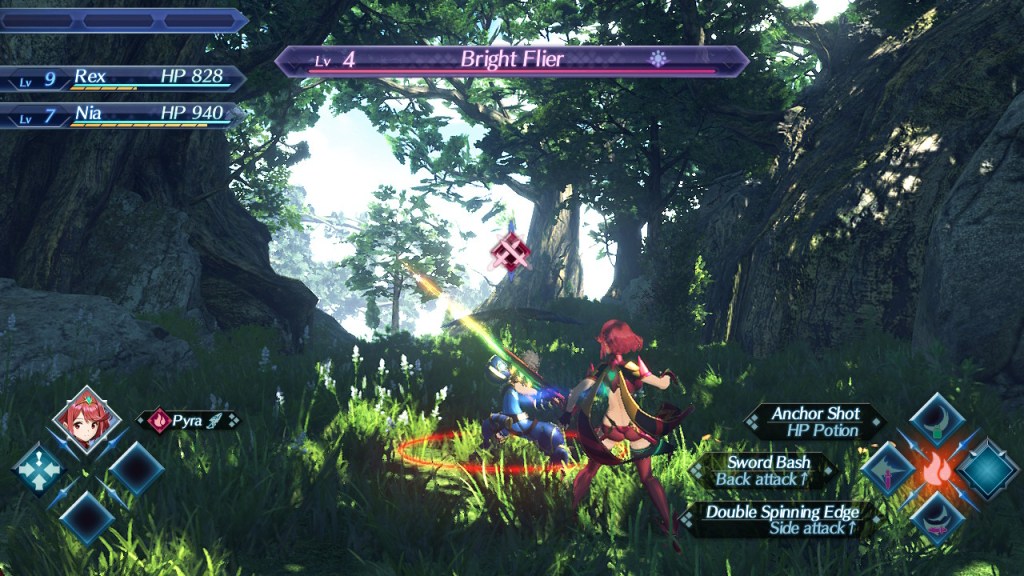 Above: Using Arts is a dance.

Combat happens in real time, but this isn’t an action-RPG like Kingdom Hearts or Diablo. Characters automatically attack enemies, but they also have special moves (Arts) on cooldown. These have special properties, like healing allies or dealing extra damage based on your positioning (some moves hurt enemies more if you attack from the back).

Your timing is also important. If you use an Art right when your character performs an automatic attack, you’ll receive bonuses. Notably, special moves will recharge faster.

Computer-controlled allies will aid you in battle, but you also have help from Blades. These are the personified versions of your weapons. You can switch between Blades during a fight, which gives you access to different Arts and fighting styles. Some will focus more on healing, some will tank damage, and others have more attack power. They also have different elemental affinities, like fire or wind, that can give them advantages against certain enemies. Battles become an intricate dance of timing Arts and picking the proper Blade. 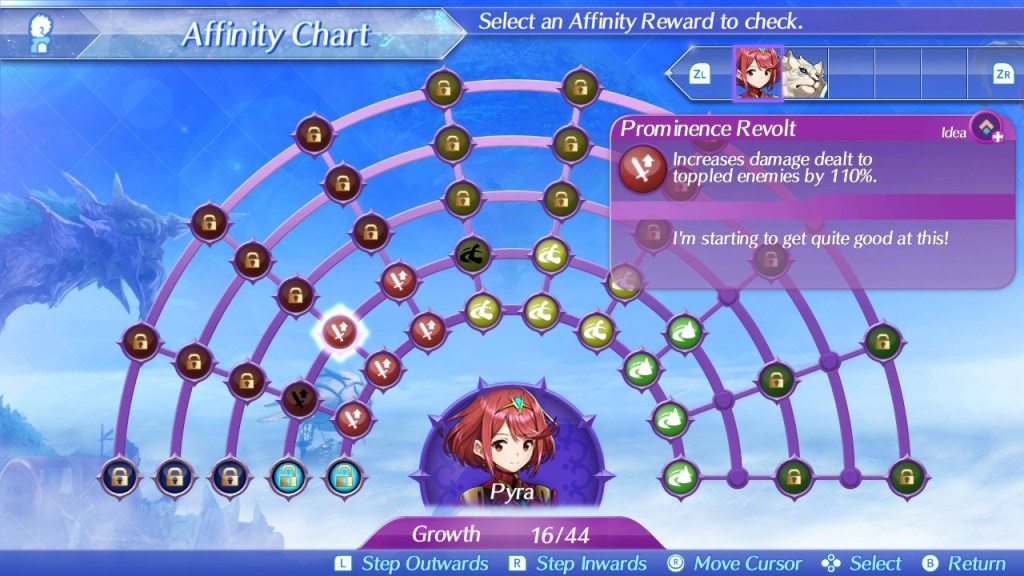 Each Blade also has its own progression tree. They can unlock new abilities if you achieve certain requirements, like landing a certain number of critical hits. More of these become unlockable as you use a Blade more often. You also earn points that help you empower your arts.

Strengthening your character goes much further. You can equip items on your party members and Blades to make them stronger or help protect you better. Buying and crafting this equipment can require scavenging materials or hunting monsters.

It’s the kind of RPG that you don’t just run through with little thought of your characters’ growth. 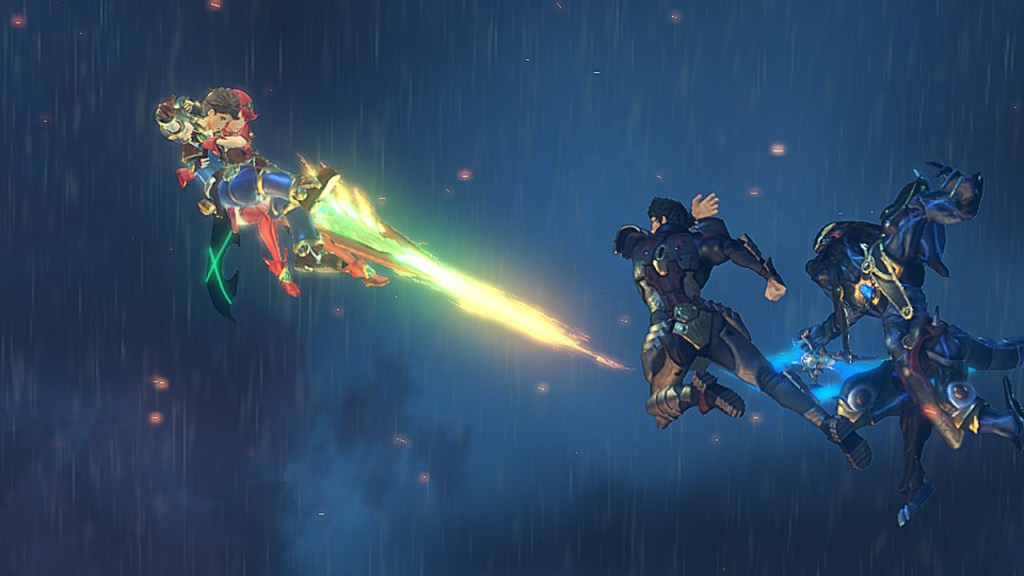 Above: The cutscenes are well animated, but smaller moments are more awkward.

Xenoblade Chronicles 2’s world is often beautiful, but its characters are a bit sloppy. They all have a slight cel-shaded look, but the hard lines are blurry and often highlight strange places (like a random out of place line on a nose). Animations often don’t look right, sometimes not exaggerated enough to convey the emotion of the moment. Characters also fall into familiar tropes. This stands out with Rex, the young, well-meaning, and good-nautured (aka kind of boring) hero.

The voice work is hit or miss. The English cast mostly does a good job. But similar to the animation, performances often don’t match what’s going on in the scene. Some voices are over-the-top and cartoon-like, some are unique with non-traditional accents, and others are what you’d expect from a generic anime. Either of these styles would have worked fine, but it’s jarring to hear them all in the same game. And the words coming out often don’t match the movement of lips.

It’s not the most technically impressive JRPG. Some of the larger cities and open vistas look good, but the denser areas clearly put a strain on the Switch’s hardware with lower framerates.

Characters like to talk during battles. A lot. And they say the same things over, and over, and over again. It gets grating fast. 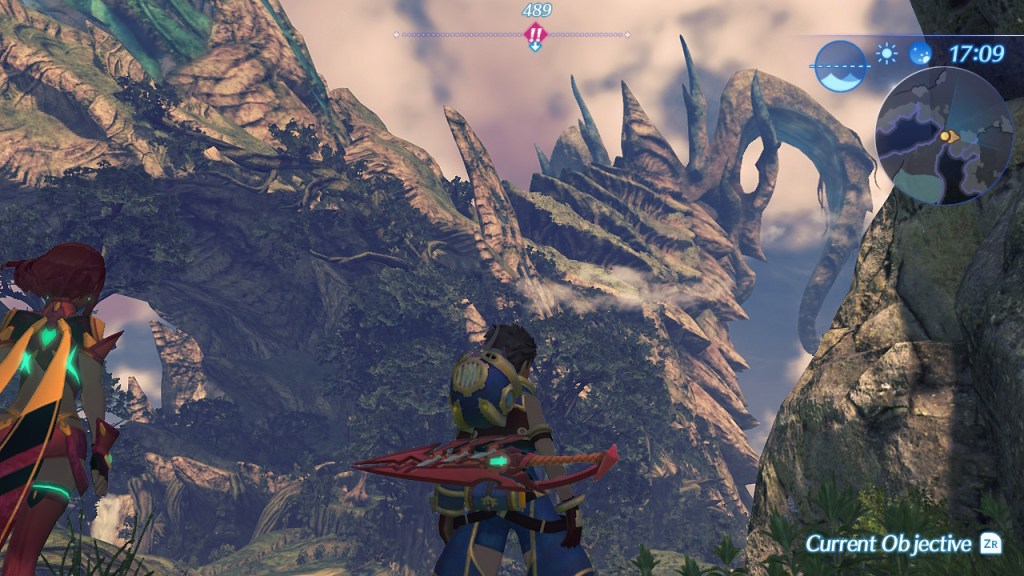 It’s not a technical masterpiece, but Xenoblade Chronicles 2 is a deep and fulfilling JRPG. It’s a great game to show just how well this genre works with Nintendo’s newest system.

If you like JRPGs with neat worlds and lot of systems that reward combat and planning, you’ll be able to spend a lot of hours in Xenoblade Chronicles 2.

Xenoblade Chronicles 2 comes out for the Switch on December 1. Nintendo gave us a code for this review.