Reigns: Her Majesty builds on its predecessor’s devilishly simple mechanics with a new story of political and cosmic intrigue. As in the first Reigns, indie developer François Alliot (aka Nerial) invites you to try on the crown — this time as the queen. Her Majesty is coming out December 7 from publisher Devolver Digital for PC, iOS, and Android.

To survive your queendom, you must balance your relationship with three segments of the population: the religious, the commoners, and the military. You also must keep an eye on your coffers. All four of these stats rise and fall depending on your decisions, and if any of them reach its maximum or minimum, you’ll be deposed in gruesome and sometimes absurd ways.

Your choices appear to you as cards, each with an appeal from someone in your court. You swipe right or left to agree or disagree to the request, just as in the original. However, Her Majesty introduces a new mechanic: an inventory.

“This time around, I think we were more consistent on the game, more traditional in some ways,” said Alliot in a phone call with GamesBeat. “We tried to help the players. We tried not to just hide everything very deep in the game. You might say we played less tricks on the player. We didn’t want to scare them away right off.”

You can collect five items. Some serve as shortcuts, and others can even stave off doom. Alliot says that this helped speed up play, creating methods of triggering certain events so that players didn’t have to just wait for the right card. Occasional hints from characters suggest ways to use the items, which can come in quite handy.

Alliot says that he likes the way word of mouth factors into how people experienced Reigns. Secrets lurk in Her Majesty, little Easter eggs that aren’t necessary for the plot but fun to discover nonetheless. You can check in the menu whether or not you’ve seen all the deaths available or if you’ve met all the characters. And because death is cyclical — once you die, you start again straight away as the new queen — you can experiment and try to trigger new occurrences.

Even with the shortcuts, you may have to wait before you can activate certain events. Her Majesty incorporates a new element into the cycle. It’s no longer just “The Queen is dead; long live the Queen.” Rather, each reign is under a different astrological sign, and certain signs trigger specific cards. This could make comparing notes even more interesting, as players have a lot more variables to take into consideration.

“There’s no bad way to play Reigns. I really want to emphasize that,” said Alliot. “We created this structure where you can loop around and the probability system will always make your new king or new queen different from the previous one. Something new will happen to you over time.” 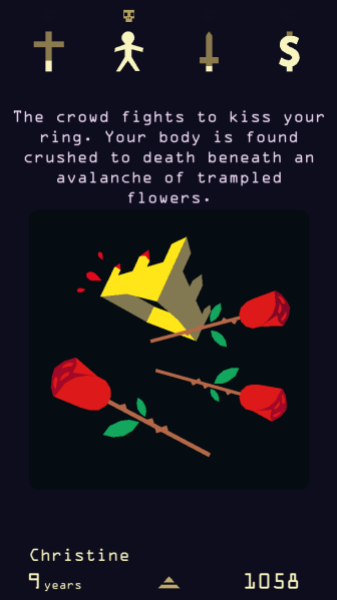 Above: One of the many deaths available in Reigns: Her Majesty.

Behind the scenes of the throne room

Aside from Alliot, the folks who worked on Her Majesty are different from the team behind Reigns. Its soundtrack has veered away from what Alliot calls the “medieval procedural music” of Disasterpeace. Instead, it features the eerie melodies of Jim Guthrie, the mystical bard behind standout games like Superbrothers and Capybara Games’ Sword and Sworcery. Arnaud de Bock crafted the look of the new monarch’s journey, consulting with the previous game’s artist Mieko Murakami. And author Leigh Alexander wrote the story and designed the narrative.

Alexander writes about technology and pop culture for The Guardian, and she also hosts its “Everything with Chips” podcast. Before that, she was a prolific game journalist and critic. She was Gamasutra’s editor-at-large, and she launched and ran Offworld, a site that focused on independent games and their cultural impact. She’s also written several books, including the illustrated short story Mona. Since early 2016, she stopped covering games, though she’s done some narrative design and writing.

Her Majesty is her biggest project as a games writer.

“I really loved original Reigns,” said Alexander in a phone call with GamesBeat. “It’s a fantastic system. As a writer in interactive entertainment, it’s unusual that you get brought in in this way, where the system is already working and people already love it. There was just an opportunity for a writer to do something new with it, to build on something fun that was already created with Reigns 1. There were a few reasons why this made me feel like it was a project where I could make an exception.”

Under Alexander’s guidance, Her Majesty explores the way power works within systems, a theme that packs extra poignancy because you’re playing a woman in a medieval setting. Your authority doesn’t go unquestioned, and you’re still subject to the social mores of the day. The cardinal may insist that you wear more modest clothes — and sometimes you won’t be able to say no because you’re balancing the stats. 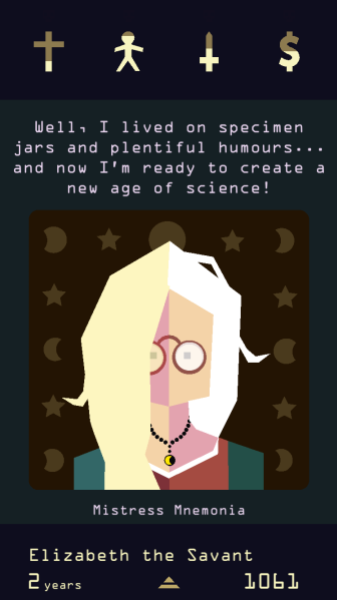 Above: No palace is complete without a mad scientist.

“It was important to me that you play as the king’s wife, and not just as a ruler who’s been gender-swapped,” said Alexander. “I wanted to look at unconventional ways of having power. Like how, in Game of Thrones, the most interesting or the most powerful characters aren’t usually the ones who are on the throne. I wanted to explore the locus of power in this kingdom, and I thought, if you were the queen, that goes really well with this idea that you have to balance all of these four powers.”

Another prominent motif is magic and astrology. The queen’s reigns are cyclical and deeply tied with the stars, and many different systems of belief battle for your support. You encounter various characters such as the acolyte, the witch, the cardinal, and the scientist. Occasionally some characters cast suspicion on others.

“One thing I was thinking a lot about is magic and folklore as means of resisting oppression,” said Alexander. “It’s a kingdom management game and you’re playing as the ruling class, but I thought it would be interesting to connect magic with the idea of resisting power, as it has been throughout history, and have it also be a kind of spiritual escape for the queen.”

Because of the themes and particularly since you’re playing as the most powerful woman in the land, Her Majesty comes across as feminist. However, Alexander says that creating a fun game was the most important thing to her. Her personality and values are present in the final story and the ideas it explores and may very well speak to folks who agree or are interested in those concepts, but that’s not necessarily the point.

“For those who want to see that in there, I hope they have some moments like that,” said Alexander. “But it was also important to me that it didn’t overrate the power of my comedy mobile video game. I want to be careful. I don’t want to come across like I’m saying that my comedy mobile game is a beautiful feminist essay and a tool for structural change, because in fact, there’s a lot of comedy at the expense of that idea in the game. That feminist goddess video games will save the world.”

Alexander said that it was challenging to write a “good Reigns card” because of the limited space. Each must communicate the character’s personality, convey something about the world, and also offer enough information for players to make an educated guess as to what swiping left or right will do. However, it was an enjoyable challenge.

“I enjoyed it structurally. I liked making those calculations,” said Alexander. “When you write one of the cards, it’s really a matter of figuring out how it’s going to interface with all the other ones. The Reigns system is not, for the most part, a linear story. It’s a whole bunch of modular moments that have to look like they’re designed to go together, even though it’s designed so that ideally you could string them together in any way and get a fun little story of the life of a queen.”

Disclaimer: The writer once adopted a cat from Leigh Alexander. Our coverage remains objective.