Y’all really like watching commercials for PlayStation games, as Sony has again has more TV ad impressions than any other video game publisher in the U.S.

GamesBeat has partnered with iSpot.tv, the real-time TV ad measurement company with attention and conversion analytics from more than seven million smart TVs, to bring you a monthly report on the TV ad impressions generated by the gaming industry’s biggest campaigns. These are the ads, and by extension the games, that game makers are putting major muscle behind. 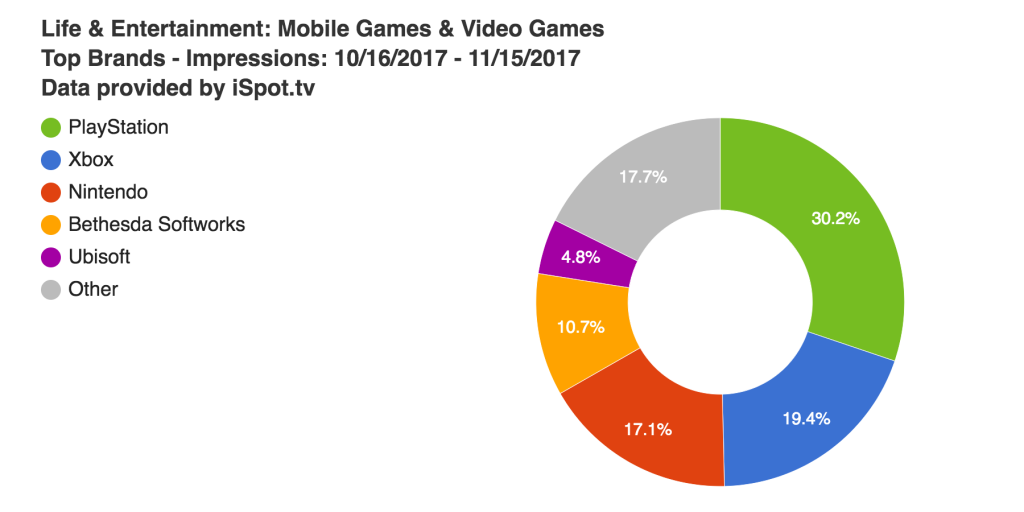 Below are the top five most-seen gaming industry brands from October 16 through November 15.

TV ad impressions in the gaming space exploded during the period measured, up from 2.9 billion last time to over 6 billion. Overall, 33 companies ran 135 spots over 27,700 times with an estimated spend of $125.6 million. PlayStation maintained a strong lead with nearly a third of the industry’s impressions, followed by Xbox and Nintendo.

PlayStation captured 1.8 billion of the industry’s impressions with 18 commercials that aired over 5,500 times. “Call of Duty: WWII: Winter Front” was the most-seen spot with 228.7 million impressions. PlayStation ads racked up top impression counts on ESPN, Fox, and Adult Swim, and during programming including NFL football, NBA basketball, and the 2017 World Series.

Xbox maintained its place at No. 2 by running nine spots over 3,400 times, which generated 1.2 billion impressions. The ad with the most impressions (657.4 million) was “Feel True Power,” featuring music from Kanye West. Xbox got its ads in front of a male-skewing, sports-loving crowd by running on Fox, ESPN, and NBC, to name three of the networks it prioritized, and during specific programming including NFL football, the 2017 World Series, and episodes of The Walking Dead.
Once again Nintendo came in third place, this time with 23 commercials that aired over 6,100 times and racked up over 1 billion impressions. The company’s most-seen ad was “Super Mario Odyssey: Jump Up, Super Star!” with 189.3 million impressions. Among the networks Nintendo prioritized: Disney Channel, Nick, and MTV; among the specific programming: SpongeBob SquarePants, NBA basketball, and The Loud House.
Bethesda Softworks is back on the ranking at No. 4 after some time off. The company ran three spots over 3,600 times, which resulted in nearly 647 million impressions. The most-seen ad (553.4 million impressions) was “Havoc,” promoting Wolfenstein II: The New Colossus. Bethesda Softworks prioritized AMC, Fox, and Syfy when it came to networks and The Walking Dead, the 2017 World Series, and NFL football when it came to specific programming.
Ubisoft took fifth place with 291.4 million impressions from seven commercials that aired 957 times. “South Park: The Fractured but Whole: Masked” was the ad with the most impressions (112.1 million). The networks generating the most impressions for Ubisoft included ESPN, Adult Swim, and Comedy Central, while the top programming included NFL football, Family Guy, and South Park.