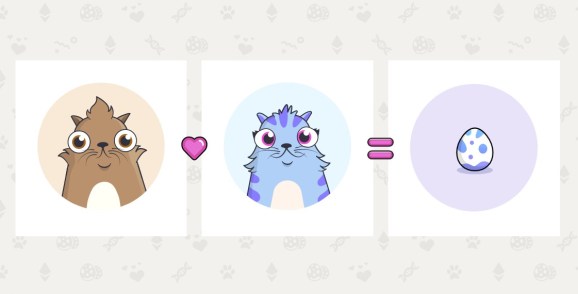 If you’re following the crypto space, you’ve probably heard about CryptoKitties over the last week. The Ethereum-based cat-trading game launched last week and quickly became the highest spender of gas, bringing Ethereum to a new all-time high number of transactions. Currently, more than 10 percent of the network’s total transactions are created by players who, combined, have already spent millions of dollars worth in Ether on digital cats, clogging up the Ethereum network worse than most ICOs do.

The company announced today that it is increasing its kitten birthing fee in order to slow down the transaction rate.

The slowdown doesn’t worry me, however. Ethereum is a nascent platform and its scalability issues will be solved. Efforts like Plasma, Sharding, Swarm and Raiden are underway to help the network handle the higher throughput needed to run large scale systems.

If it doesn’t make sense to you that grown men are spending real money trading images of cute kitties, imagine for a second that these images represent something else. It could be stocks, real estate, gold, or any other real-world asset you’re able to buy and sell. Although a novel idea, the cats shouldn’t be considered much more than a proof of concept, a showcase of some of the possibilities that lie in Ethereum’s ability to tokenize and trade physical things. It’s this promise that’s gotten the Ethereum community so excited over the last few days.

When new projects are built on Ethereum, their token is usually issued under ERC20 token standard. CryptoKitties, however, uses the lesser known ERC721 standard, for non-fungible tokens. Under this standard, you ensure that each token has its unique attributes and values and that it can’t be substituted for another, making it perfect for solutions that depend on tracking individual units or entities of any kind — for example, ownership of a specific piece of land.

ERC20 and ERC721 also have great things in store for gamers. Virtual currencies have always been an integral part of video games, and in-game cryptocurrencies could be the next logical step as marketplaces in online games are decentralized. Skin gambling is another large and related market that is crowded with bad actors and just waiting to get disrupted. Enjin Coin and DMarket are two Ethereum-based projects looking to fix this and take gaming to the next level.

Although concepts similar to CryptoKitties have been launched on Ethereum before, like MoonCatRescue and CryptoPunks, CryptoKitties is the first to gain real adoption. I guess you really can’t go wrong with cat pictures.

The game has shown us three things: that the crypto community can’t wait to get its hands on new blockchain use cases beyond trading cryptocurrencies, that investors have a lot of money and are willing to spend it, and, most importantly, that new Ethereum apps are able to gain adoption rapidly. The last point is certainly bullish for anyone planning to do a product launch in 2018.

Trond Vidar Bjorøy is head of product development and implementation – Nordics at travel management company ATPI. He became interested in blockchain due to its applications in the travel industry but now tracks ICOs and emerging blockchain projects across a variety of industries.