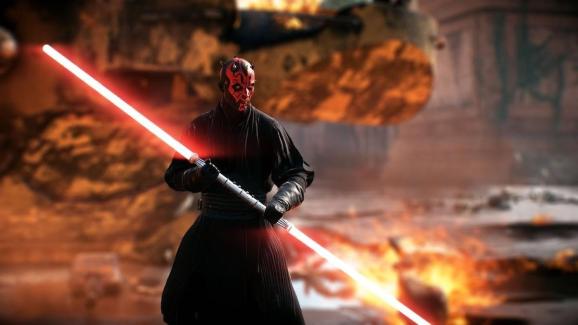 Darth Maul appears in the multiplayer.

Electronic Arts removed real-money transactions from Star Wars: Battlefront II, but the publisher’s sci-fi online shooter’s multiplayer progression is still a bummer. But now, as part of previously promised changes, developer DICE is updating how matches award in-game currency and how some of the loot boxes work. EA is also promising that more adjustments are still in the works.

Star Wars: Battlefront II was supposed to launch with the option to buy loot boxes with a premium currency that you could purchase with money. EA removed this after fans revolted to what they viewed as a pay-to-win model that leaned to heavily on gambling-like mechanics. The outrage grew so loud that it drew the attention of lawmakers in Belgium and a Hawaiian state legislator. That noise put fear into Lucasfilm and Disney, which called up EA hours before the company removed its real-money options owner Disney, .

The update is live now, and it will also roll into a new season of content that corresponds with and capitalizes on the December 15 debut of Star Wars: The Last Jedi. This event will bring new character into the shooter, including John Boyega’s character, Finn.

“It’s been a busy few weeks for Star Wars: Battlefront II,” reads an EA blog post. “We’re excited to have launched the game to the world, but recognize that there have been some challenges along the way. We have learned a lot, and are making adjustments to the game to ensure the best experience possible.”

Here are the major changes in the update:

DICE has not announced any changes to matchmaking or any other online systems at this time.

Even as someone who has spent some time with the game, I don’t know if these are going to make a huge difference. The multiplayer never fails to bum me out every time I die with a character with low-level perks against someone else who has a fully decked out character. The system right now favor people who have more time to pour into match after match, and DICE likely designed it that way so then people with money could easily catch up. But while that would have left out those of us who didn’t like the game enough to spend time or money, Battlefront II’s multiplayer feels broken for everyone except for the most dedicated players.

Giving more credits could help, but I continue to hope that DICE returns with a more drastic rework of its online progression system.