High Fidelity is unveiling Avatar Island, a virtual reality domain where users can buy and sell items based on a blockchain service.

The move paves the way for buying and selling user-generated virtual goods, similar to what Philip Rosedale, CEO of High Fidelity, made possible with Second Life, the virtual world he created when he founded Linden Lab in 1999. But at his new company, Rosedale is trying to modernize the commerce system and open it up so it can be far more empowering for both users and creators.

“I’ve been looking at blockchain technology since Second Life, as the Linden dollar was one of the first digital goods currencies,” Rosedale said. “At the time that Bitcoin came out, I was thinking a lot about how we could generalize what we did at Second Life. I didn’t have all of the ideas, but in the last few quarters we have been building the backend system to make all of this work.”

High Fidelity has built its Avatar Island commerce system on a blockchain, similar to cryptocurrencies such as Bitcoin and Ethereum. The ledger of transactions will exist independent of High Fidelity, providing unalterable, irrefutable proof of ownership. The system took about six months to build.

“We knew this is one of the key things we needed before people started building a lot,” Rosedale said. “We needed a system to buy and sell things to each other and a system to properly recognize ownership. Our vision for VR in High Fidelity would mandate everyone running their own servers. You need something that recognizes ownership across all of these different servers. We saw blockchain was the way to do it.”

The system is in its beta stage now. It has a user interface for a wallet and marketplace. On the backend, High Fidelity is creating the first server for the blockchain, and it will eventually be one of many servers that store money and information about who owns what.

Under this design, High Fidelity the company could disappear and the blockchain would live on. Other virtual worlds could use it. It could even bridge the gap between purchases in the virtual world and the real one.

With Avatar Island, users can now purchase more than 300 items for their avatars. Those items were created by digital artists around the world who will make money from the purchases.

Above: Avatar Island has a market where you can buy and sell items.

“The thing about a public blockchain that we wanted to take advantage of was this,” Rosedale said. “The most durable representation of a digital good is where no single company could intentionally or accidentally delete it. The same is true for money. It’s a kind of database record that can’t be altered by a special agency. With High Fidelity, we are trying to build open source, publicly usable software that hopefully millions of people will use to serve up VR.”

People submit their creations for a period of public inspection, much like what happens when applying for a patent. High Fidelity certifies the item and says it is now available for sale. The items are the first digital assets to be certified on High Fidelity’s blockchain service, the Digital Asset Registry, which is a decentralized, publicly auditable ledger that serves as a record of transactions made by High Fidelity users.

Each item is uniquely identified with a digital fingerprint (a hash algorithm) and can be purchased using High Fidelity’s blockchain currency, HFC. You can look at an item someone is wearing and then hover over it. It will show you its certificate, proving that the person owns that item.

The launch of Avatar Island is a step toward building a virtual economy in High Fidelity. But Rosedale said it’s also a major milestone for virtual worlds more generally: The registry is the very first blockchain used for virtual world commerce, one that could even become a bridge to the real world.

Technically speaking, Avatar Island is an example of the Proof of Provenance services High Fidelity is building on the DAR. In its simplest form, Proof of Provenance (PoP) documents an asset’s chain of ownership, its characteristics, and its entire history, from certification onward. It’s a form of proof no one can alter, delete, or deny, Rosedale said.

These qualities allow PoP to do much more than track ownership; the PoP can can also be used to authenticate the characteristics (i.e. metadata) of digital assets in a High Fidelity domain, allowing domain owners to regulate the objects allowed into their virtual spaces.

For example, the owner of a steampunk-themed space might limit items to theme-appropriate clothing and accessories purchased from approved vendors, or provided for free by the owner herself.

In the future, item ownership recorded on the DAR could also be used to translate purchases between the virtual and real worlds. You might buy a pair of shoes for your avatar in the virtual world and receive an unfalsifiable coupon for the same pair of shoes in a real store. The distributed, trusted nature of a blockchain solution makes this possible. 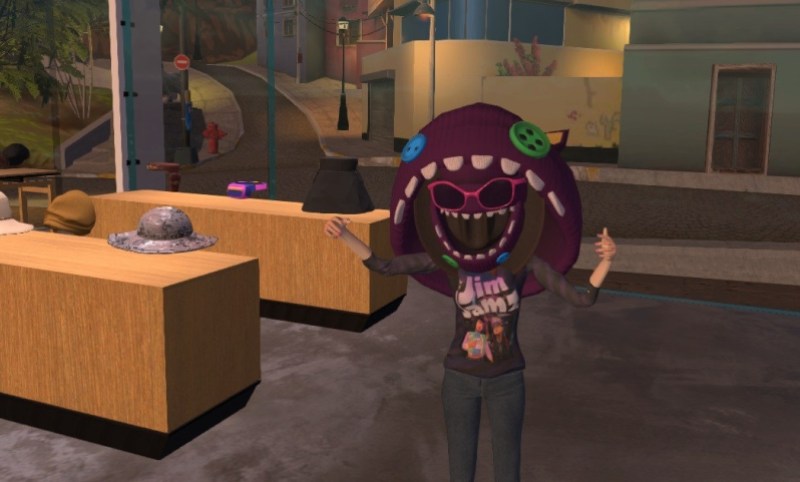 Above: Hmm. What would you pay for this item?

Perhaps best of all, an asset’s PoP exists on the DAR blockchain independent of High Fidelity. An asset’s chain of ownership — its sale and resale — lies entirely in the hands of the object’s owner.

Over time, the DAR will expand to provide a variety of digital proof services, such as identity control. High Fidelity is inviting users to submit new items for sale on the High Fidelity marketplace and on Avatar Island. They may also submit a request to participate in the closed beta for High Fidelity’s commerce functionality.

Rosedale said that High Fidelity couldn’t use existing public blockchain cryptocurrencies such as Bitcoin and Ethereum because of the time it takes to settle transactions and how many transactions can be done simultaneously.

Fees for transactions on Bitcoin are also high, at perhaps $10 per transaction. That doesn’t work when the items are worth a couple of dollars.

On top of that, the economy requires a stable currency, Rosedale said. If Bitcoin’s price keeps rising, as it has soared above $11,000 per coin, then the best move for people is to hang onto it. People won’t spend a currency that is rising in value so fast, and that would impede commerce in the virtual world. If a stable currency comes online with low fees in the future, then Rosedale said the company would consider shifting to it.

In time, Rosedale hopes to make the currency convertible into other currencies, so users will eventually be able to cash out the money they make in the virtual world. Users might also take their money and leave the game to join another game.

“We are willing to take on that risk,” Rosedale said. “Maintaining the ease of moving cryptocurrencies around have so many more benefits to us and our users that they outweigh the benefit of having them spend it internally.”

The ability to move between virtual worlds could enable the Metaverse, a kind of virtual world of virtual worlds first envisioned by Snow Crash author Neal Stephenson. Some industry leaders, such as Tim Sweeney, CEO of Epic Games, desperately want this Metaverse to be open, not controlled by any single company.

Rosedale wants that too. He thinks that digital assets, such as the clothes you wear, and your digital identity should move across virtual worlds. High Fidelity will form alliances with other virtual currency owners later. It will also authorize more servers to begin the process of making it decentralized and more secure.

“For virtual goods, there’s an immediate need for interoperability,” Rosedale said. “I should be able to take a grandfather clock and put it in any one of the digital spaces. And I should carry around proof of it, so that others don’t just create digital knockoffs of it.”