Hearthstone’s new Kobolds & Catacombs expansion launched today for PC, iOS, and mobile. But the 135 new cards aren’t the most interesting thing to come to Blizzard’s free-to-play hit. Along with the new set, Blizzard has also released Dungeon Runs. This is a new single-player mode that has you picking a class with a pre-made, weak deck, and fighting a series of bosses. After a win, you get to add more cards to your deck. Sometimes you’ll pick a powerful spell or minion only available in this mode, and sometimes you’ll choose between three different packs of three cards that have some kind of synergy. Sometimes you get to choose one of each.

Your goal is to beat eight bosses before dying. If you do lose, you have to start over again. It’s one of the best things Blizzard has ever added to its digital card game, and it’s free. 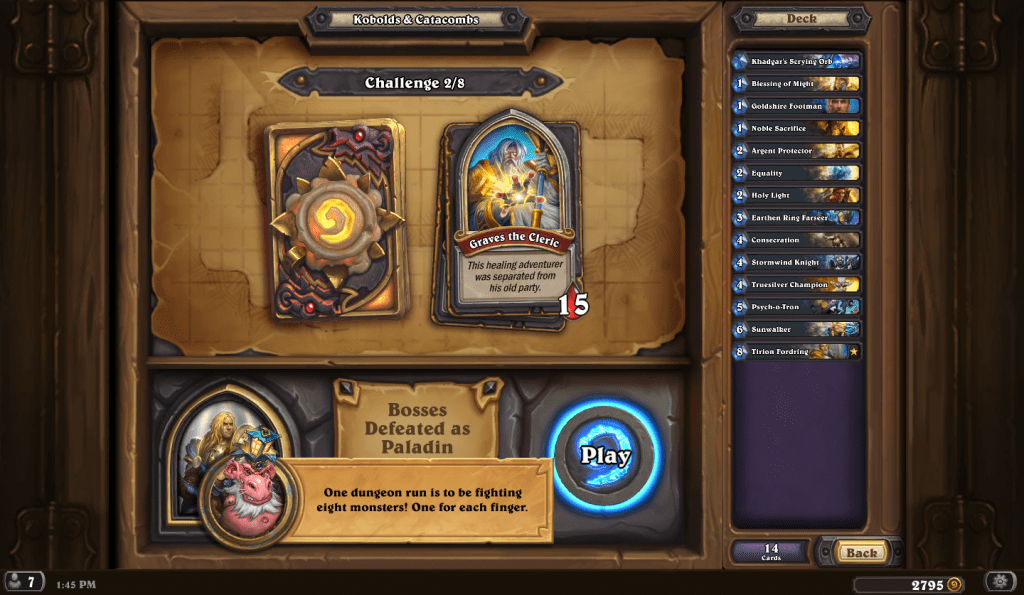 Above: Getting ready to fight a boss.

Dungeon Runs are exciting because they’re different. All other single-player content for Hearthstone has followed the old Adventure formula. You fight a series of bosses, which are armed with premade decks with unique cards and Hero Powers. They were often more deck-building puzzles than actual Hearthstone matches.

The bosses in Dungeon Runs still have unique Hero Powers, but you don’t need super-specific decks to fight them. That deck-building aspect of Adventures always made it so that players with a larger card pool had an advantage over newer players or those with free-to-play collections. Dungeon Runs are much more accessible, since every player will start out with premade decks and adds card packages as they win, not from their own collections.

The deck-building challenge here is more interesting, too, than in the old Adventure mode. After every victory, you must consider the cards in your deck and decide which reward packages make the most sense. One of the options could include three high cost Legendary minions, which could seem enticing, but you need to recognize that the less sexy package with cheap spells might more sense. Above: Picking your new cards.

This is especially true if you’ve picked unique Dungeon Run cards earlier with special, passive effects. One card reduces the cost all spells in your deck by 1. From then on, it might not be a bad idea to prioritize new deck offerings with more spells.

But it’s not just all about building a strong deck. Bosses become more powerful the further you get, and they can become a real challenge. I came across one that could summon a minion with Poisonous every turn. But while that usually just means they can kill any minions with a single attack, this Poisonous also works on heroes. Basically, if I took any damage from that thing, I was dead. 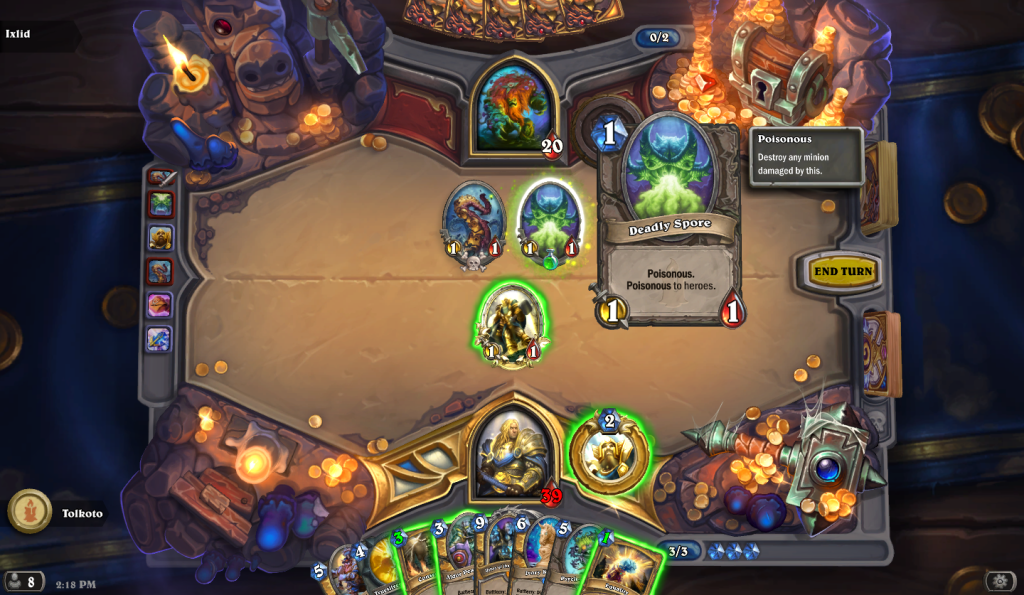 Above: Seconds before I killed myself.

I even took the time to hover over this card and take a picture of it for this story. Then, with only the thought of removing it from the board on my mind, I equipped a weapon and swung at it. “What value!” I thought. “I’ll be able to kill this one and the one next turn with the same weapon!”

A second later, I realized I just killed myself.

But I wasn’t mad. I laughed. Seeing unique situations like this is what makes Dungeon Runs so entertaining. Blizzard has created Hearthstone’s best single-player content yet. I just hope they continue to support this entertaining mode by introducing more bosses and rewards in the future.