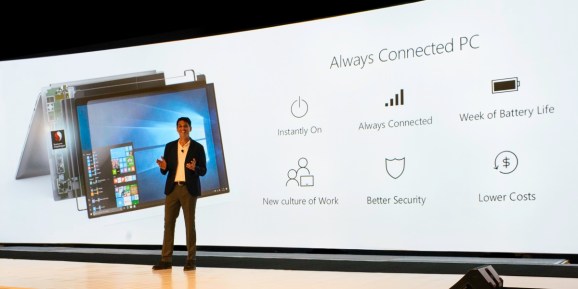 Microsoft announced massive Windows 10 news this week, arguably the biggest since the operating system debuted over two years ago: Windows 10 on ARM. Three big features come with that: The screen turns on “instantly,” unlike existing PCs; LTE is built right in; and the battery can last for days. But the unveiling comes with a big caveat. These Always Connected PCs, as Microsoft and Qualcomm are calling them, from partners Asus, HP, and Lenovo, are not coming anytime soon.

The closest to launch is the Asus NovaGo, likely to arrive sometime in Q1 2018, I’m told. But it won’t even get all the features Microsoft has talked about until this spring. That’s when HP will debut its Envy x2. Lenovo is in the game, but details are even more scarce there: We know nothing about its device, let alone timing for it.

In short, you’re not getting an Always Connected PC for Christmas this year.

I wouldn’t even hold my breath for Christmas 2018, to be honest. Delays are certainly possible (already, we were expecting the first devices to arrive by end of this year). But even if 2018 brings a handful of these devices, there will likely still be a few obstacles.

First, expect availability to be limited. The Always Connected PC you want may not be sold in your country. Which channels will PC makers use for these new laptops? We don’t know.

Secondly, expect carrier restrictions to get in your way. Will you even be able to buy an Always Connected PC without signing an annoying contract? We don’t know.

Last but not least, expect software bugs and the like. Microsoft is still working on this particular flavor of Windows 10. Will all your required apps work as expected? We don’t know (though the progress looks promising).

Microsoft executives explained to me that the company very much sees this as the launch of a new category. We’re at the very beginning, and Windows 10 on ARMcould affect the future of computing as we know it.

Assuming Windows 10 on ARM succeeds, their assertion is certainly correct: Laptops that last for days are unprecedented, even if they’re less powerful than current options.

But a brand new category also means you’ll want to wait — read the reviews, see what the competition cooks up, and look carefully for reasonable pricing.

For all these reasons and more, I’m not holding my breath. There’s plenty that can go wrong here, and after all, Microsoft’s last attempt (Windows RT) failed spectacularly.

I don’t even want an Always Connected PC. The promised features frankly fall short of what I want out of my PC.

I’m happy not paying a carrier for data service, and my existing laptops turn on quickly enough. The third feature is the only one attracts me: battery life. But I don’t want to sacrifice performance for it, which is where the competition comes in — Intel and AMD seriously need a third player to push them in the battery life department.

Qualcomm wants to be that third option — I think of it as the alternative to the Android-iOS duopoly that never was. Where BlackBerry and Windows 10 Mobile failed — a proper catalog of apps — Windows 10 on ARM promises to deliver by not just supporting Universal Windows Platform (UWP) apps and Win32 apps in the Windows Store, but also existing Win32 apps.

The potential here is huge. Intel and AMD have to at least take notice. And that’s why all PC users should care about Microsoft’s move with Qualcomm: Competition is a wonderful thing.

Whether Always Connected PCs succeed or fail, Windows 10 on ARM will change the PC market forever.