SCP-3008 is a Swedish furniture fever dream. It’s based off a horror story from the popular SCP Foundation website, one that describes how someone finds themselves in an endless Ikea. Inhuman creatures known as the “Staff” stalk you. It’s still in early development, but developer Julian M., who’s also known as N00mkrad or nmkd, released a free single-player demo on his Itch.io page. The final game will be multiplayer, and it’s tentatively slated for release on PC in Q1 of 2018.

SCP has been around since 2008. It’s a fictional wiki for a secretive organization that deals with paranormal phenomena, and anyone can submit entries to it. SCP-3008 is written by a user named Mortos, and as is the custom, it features an official “form” along with an incident report: The journal entries of a poor soul lost to a labyrinth of chic couches, Billy bookcases, and sleek Nordic bed frames. They find out they’re not the only one: Makeshift cities have sprung up in the infinite Ikea, a kind of substitute society that has banded together against the monsters that attack at night.

It’s a cheeky tale, and there is a kind of surreal humor to Julian’s demo. I wandered through the aisles and occasionally stopped by large, blocky food dispensers to snack on meatballs. While searching for an exit, I hopped a few times on a couple of neatly made beds and rearranged some of the displays. At some point, I found large structures made of bookcases stacked haphazardly against each other, reaching high up into the ether above me. “Huh,” I thought. “That’s weird.” And then, the lights shut off.

Julian is only three months into development, so the demo is still an early model that’s only single-player. But the final version will be multiplayer so that folks can assemble tribes, forage for resources, and build barricades together to fend off horrific humanoid creatures called the Staff. 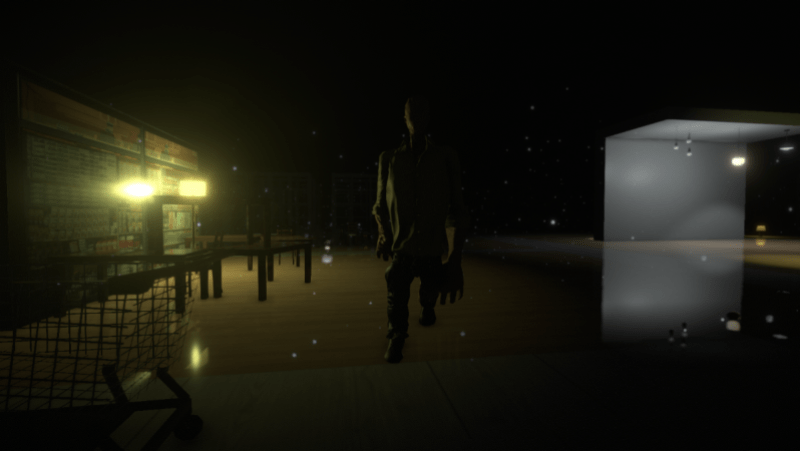 Above: A member of the Staff from a current build that Julian is working on.

“There will be normal co-op survival, but I’m also planning other modes,” said Julian in an email to GamesBeat, listing a tower-building mode, where players stack furniture as high as they can in a certain amount of time, and a “floor is lava” mode, which challenges players to travel to an objective without touching the ground. He added, “There are even more modes planned — like a persistent world, but I haven’t tested that in any way, so I can’t promise anything.”

Navigating Ikea in the dark with nothing but a phone light is strangely sinister. You know you’re not supposed to be there. The silhouettes of silent furniture around you rise up like tombstones as you venture forth. Occasional groves of lamps cast disorienting shadows against the walls. The switch to “night time” in SCP-3008 is excellent at creating a tense atmosphere. You have no idea where you’re going. And once the Staff appear, you’ll have to scramble for your life.

Julian started developing using Unity around the end of 2012, but he had trouble finishing projects because he wasn’t sure which direction he wanted them to go. However, adapting SCP stories acts as a roadmap for him. He’s also open to folks who want to join him on his project and encourages people to reach out to him on the chat platform Discord.

“With SCP as a ‘foundation’ — pun more or less intended — I have a clear idea of what to do,” said Julian. “Also, developing in a scene (the SCP fandom, mainly its subreddit) might limit the audience, but everyone is familiar with it, and many people there want such a game.”

SCP has inspired other games, such as Joonas Rikkonen’s SCP Containment Breach, a free open-source indie release that first debuted five years ago and continues to get patches and updates. And folks have also made games based on Ikea, like Höme Improvisåtion, a multiplayer comedy of errors and furniture assembling. Combining the two into a survival of wits seems like the perfect match.

“I think it’s because it’s a huge universe, but you can choose how large your game should be,” said Julian. “If you say you’re making a Star Wars game, people expect it to have lightsabers, at least 20 ships, the Death Star, and a variety of characters. When making SCP games, you can limit it to a single SCP. Some are bigger (1730), some are smaller (087). There’s simply a large variety and many options.”