Last night’s The Game Awards had some touching, sweet, and funny moments. But Josef Fares, creator of the upcoming A Way Out from Electronic Arts, stole the show. While he got the most laughs, he also addressed some of gaming’s most serious subjects.

Like it or not, The Game Awards capture the culture of gaming. The characters who go up on stage and the stories they tell bring out the passion of the industry, and they underscore both the pride and the tribalism of gamers and game makers. To me, the developer speeches always say so much, cutting through the corporate nature of gaming and taking it back to the joy of creativity.

“There are crazy people, and then there are me,” Fares said to The Game Awards host Geoff Keighley. “I’m so passionate to be here. This is great that you started this. Look, The Oscars should fuck themselves up. This is the shit. This is the real shit.”

Fares is the guy who said in an interview with me that if you didn’t like his game, you “could break my legs.” And he also addressed gamer anger about EA messing up its pricing for loot crates, giving gamers the impression that EA was trying to milk them for every penny and that the rich could pay to get better gear.

“This is the thing,” Fares said, referencing his game and the notion of letting a co-op partner play for free. “This is my idea. It doesn’t have anything to do with the EA shit going on — with the loot boxes. No! EA has been very good to me. And to be honest with you — because it’s nice to hate EA, blah blah blah — I don’t care about that shit. What I’m saying is this: all publishers fuck up sometimes. That’s how it is. They fuck up. In this case, they’ve been treating me very well.”

Games have been viewed as inferior to movies, prompting the comment by Fares, a former filmmaker, about the Oscars. But at $116 billion in annual revenue and counting, gaming has nothing to be ashamed about. It doesn’t have to walk in anyone’s shadow.

Fares also noted that he gets to keep all of the profits from the game. If Fares had the humor, another moment captured sweetness. Carol Shaw went onstage to accept the award for “industry icon.” She made games for Activision 35 years ago on the Atari 2600 console, from Polo to River Raid. The latter sold more than 1 million units.

“I just wish my father had lived to see this,” Shaw said. She thanked her husband and her fellow designers at Activision.

“The graphics have gotten a lot better, but the classic games are still fun to play,” she said. In fact, you can play River Run in the Headquarters section of Call of Duty: WWII. “There are a lot of opportunities today in game development. There’s augmented reality and virtual reality. It’s amazing what has happened in the last 35 years in the game business.”

Before that moment, her story had been lost in time.

Another nice moment was when Swinburne University’s Steven Scoglio accepted the award for “best student game” for Level Squared.

“I’m graduating in a week. Somebody hire me please,” he said.

The show also had some powerful moments. Melina Juergens, a videographer at Ninja Theory, won the award for best performance for her lead role in Hellblade: Senua Sacrifice. The game also won for best audio, and it won the award for “games for impact” because it depicted a main character’s struggle with psychosis, or seeing visions that no one else could see. Juergens thanked the jury for recognizing a game that depicted mental health issues.

“I”m super nervous,” she said. “I’m Ninja Theory’s video editor. I’m not an actress at all. Hellblade has been my first acting job. I’ve never done anything it in my life. I just want to thank Ninja Theory for supporting me and being me patient with me and giving me this chance to prove that I can do it and believing in me….I feel so honored that I had an opportunity to give a voice to people that are suffering from mental health issues.”

It was as good as any Oscar speech.

We saw some weird things, like every moment of the crazy Death Stranding game trailer. Actor Norman Reedus went on stage with game creator Hideo Kojima.

“I have to say it’s such an honor to work with you. You’re such a genius,” Reedus said. “It opened my eyes to a whole new world. I think I have to now go out on the Internet and try to figure out what I just watched.”

Reedus articulated what everyone else was thinking. While the event seemed like another coronation for Kojima, we’re all hoping that we’ll find out exactly what this game is about someday. 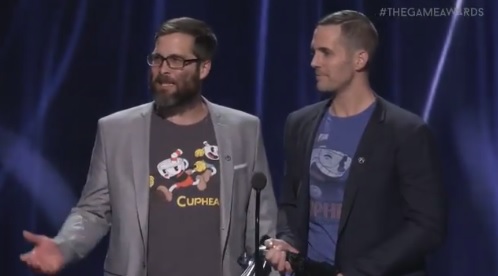 Chad and Jared Moldenhauer quit their jobs and mortgaged their homes to make their debut game at Studio MDHR. And they walked away with multiple awards for their whimsical Cuphead.

They won awards for art direction, best indie debut, and best independent game. Cuphead gained notoriety for some reason or other, but clearly many people fell in love with its ode to 1930s cartoons and its unforgiving platform gameplay. Chad Moldenhauer was awestruck as his team (including Maja Moldenhauer) accepted the award from Guillermo Del Toro and Kojima. He thanked everyone on their team and Microsoft and players for playing the game.

“Wow, just wow,” Chad Moldenhauer said. “We poured our heart and souls into this game and to be recognized with the greats like this is just out of this world.”

It was like they had emerged from the fairy tale they had created and walked into another one in the real world. 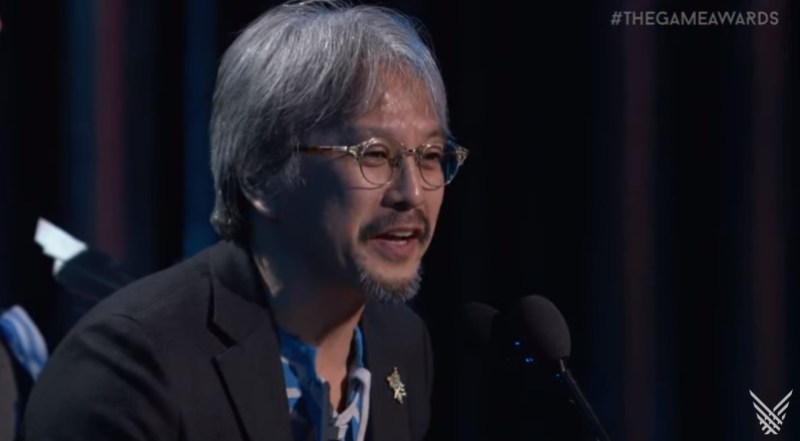 Above: Eiji Aonuma is the designer of The Legend of Zelda: Breath of the Wild. He accepted the award for game of the year at The Game Awards.

And when the inevitable victory of Game of The Year came for Nintendo’s The Legend of Zelda: Breath of the Wild, it was almost anti-climactic.

“Thank you America!” shouted Eiji Aonuma, game director, in his acceptance speech. The show was more than three hours long, but 8 million people voted on the awards and it was a fitting tribute to a game industry that, loot crates or not, hit its stride in a big way in 2017.