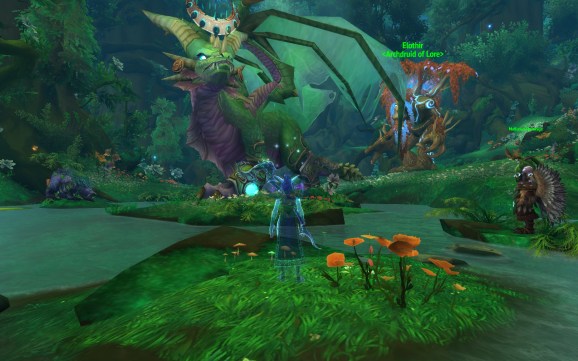 It’s the end of 2017 and World of Warcraft still dominates the western hemisphere as the most popular massively multiplayer role-playing game on the planet – 13 years after its initial launch. While there are a few stalwarts (Guild Wars 2, Elder Scrolls Online, Final Fantasy XIV, and even Star Wars: The Old Republic), the MMORPG hasn’t seen a true hit since the year Azeroth broke the Internet. And yet, as editor of MMORPG.com and GameSpace.com, I’m here to tell you that the genre isn’t dead. It’s the future. It’s the always. The MMO is all around us…you just can’t see it anymore.

See if you all can follow me here, have you heard of Destiny? Have you celebrated a Chicken Dinner in PUBG? Have you decimated opposing tanks in Wargaming’s World of Tanks? Well, then you’ve been playing MMOs that don’t call themselves MMOs. When your average gamer hears that three-letter acronym, they panic, their palms sweat, fears of endless grinding and late-night raid schedules creep in. The MMO genre was a victim of WoW’s mammoth success. The Blizzard-made behemoth created such a vacuum in the industry, that for a good few years every blockbuster studio was trying to replicate its success.

There’s something called the Blue Ocean Strategy, in which when a company finds itself in a crowded market, it must seek a new angle to find success. Nintendo famously did this with the original Wii console, and recently again with the Switch. It happens with specific game genres, too. The MMORPG was one that people remember and point to often, because so many “WoW Clones” flooded the market. Blue Ocean is a reference to sharks in the sea, ergo when it’s too crowded in a market it’s a red ocean – a feeding frenzy is in place and you’ll be lucky to make it out alive.

The exact same market frenzy happened with MOBAs. How many are still alive and thriving after the initial success of League of Legends and DOTA2? Then came the ongoing Collectible Card Game craze (again, thanks to Blizzard). Then there was the DayZ clone craze. And now, we’re seeing history repeat itself with the PUBG -styled Battle Royale game, thanks to Bluehole and modder-turned-game-dev-all-star Brendan “PlayerUnknown” Greene. (Interesting to note that DOTA 2 and League of Legends also came from modders.)

This sort of market boom, bust, and repeat is cyclical. It happened with 3D platformers in the wake of Mario 64. Before that it was fighting games on 16-Bit systems. We are destined to repeat this, as much as the mobile market is destined to go after anything Supercell makes for the foreseeable future.

But there’s one thing that the MMO made permanent in all of gaming that we cannot escape: persistence. People want their games to last forever, their progress to be undying, or at the very least to have the idea that all their hard work having fun wasn’t wasted. Persistence, as seen in Destiny, PUBG, League of Legends, and now even Call of Duty WWII, is akin to taking the tiniest sliver of what makes games like World of Warcraft stick and slapping it on what used to be a finite experience. It doesn’t always work out, though: hell hath no fury like a fan pissed off though: just ask Destiny’s developer Bungie who is still dealing with the community fallout from Destiny 2.

If World of Warcraft tore the lid off the roof of the MMO, and then all its also-rans put it right back on, games like Destiny, World of Tanks, and now PUBG are opening the window just a crack. The MMO is not the MMORPG. The traditional fans of games like EverQuest and Ultima Online will be the first ones to tell you that. But then here we are – a world where most every major release has some form of MMO-lite feature tacked on. Just a look at recent SuperData findings shows how many online games are leading the pack of top earners.

The main one? That’s persistence, as found in the upcoming MMO Dual Universe). It’s arguably why I still return to Azeroth myself year after year. It’s a place that’s familiar, changing but a bit, and offering a nostalgic respite during the cold months when I remember what it was once like raiding Tarren Mill in the wee hours of the morning. The same sort of memories were made for others in Asheron’s Call (rest in peace), EverQuest, and Ultima Online.

Today there are millions of MMORPG fans longing for a world to call home that’s newer, fresher, more exciting than those we’ve been visiting for years.  Every time I point them to games like Destiny, I’m told to bugger off. “That’s not really an MMO”. And in some ways, I think they’re right. Games like Destiny, PUBG, Warframe, and World of Tanks sprinkle in the key ingredient of persistence, whether in a full world or in character progression and unlocks. Whether it’s in the characters, the progression your account makes, or the story. But they fail at providing a truly massive interconnected world where players can and do see each other doing everything from fishing to dancing on mailboxes.

Lofty expectations placed on the shoulders of Chris Roberts’ Star Citizen notwithstanding, the MMORPG has been in a rut publicly. Although it’s quietly enjoying a renaissance in games like Ashes of Creation, Crowfall, Chronicles of Elyria, Camelot Unchained, and Legends of Aria — indie devs all over are trying to make something new for fans of the classical massively multiplayer role-playing game to become enamored with. And maybe, one day, one of them will release a finished game. Until then, I’ll be killing kobolds in Elwynn Forest gleefully in between Nightfall Strikes on Nessus, and eating Chicken Dinners in PUBG.

Bill Murphy is the Managing Editor of MMORPG.com and GameSpace.com, and wishes he had more time to play games despite all this.