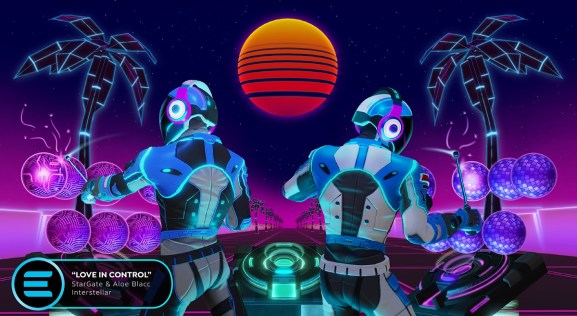 Survios made its name in virtual reality with the 360-degree shooter Raw Data. Now the Los Angeles VR studio is unveiling Electronauts, a virtual reality music-creation tool designed for music lovers and creators of all ability levels.

The company said that Electronauts plunges users into a “surreal sonic experience where they can remix, compose, jam, and perform on uniquely designed electronic instruments.”

“Electronauts harnesses the power of VR to go inside of a song and feel completely in control of the music,” said Nathan Burba, Survios cofounder and CEO, in a statement. “We’re incredibly excited to announce Electronauts alongside a highly anticipated new computer like the iMac Pro, which can easily handle the demands of our high-performance VR software. We are also excited to collaborate with Stargate, who share our vision for pushing the creative limits of music using VR.”

To showcase the game, Survios has enlisted Grammy-winning producer Stargate to incorporate the music of top artists, producers, and DJs into Electronauts. Additional participating artists will be announced at a later date. Players will be able to remix songs and engage with these top artists’ music in a brand new way.

“Never before have you been able to create music and interact with sound in a truly immersive way,” said Stargate’s Mikkel Eriksen in a statement. “This opens up for a totally new level of creative freedom and will inspire both seasoned artists and musicians as well as people with no musical training. Anyone can instantly create magic. The fact that you can play with material from today´s most talented artists makes it even more compelling. I truly believe Electronauts is groundbreaking and a game changer in music creation.”

Artists can get in early with the Electronauts Creator Beta, a closed beta for creators who want to create music with Electronauts and/or to be integrated into the tool. Creators will be able to inject their own sound into Electronauts to create their own immersive music worlds.

Founded in 2013, Survios has created VR titles such as Raw Data, which sold more than $1 million worth, and Sprint Vector.