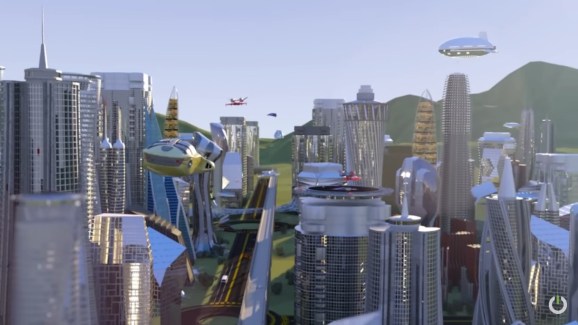 From the Decentraland promo video

Blockchain-based virtual reality universe Decentraland is holding its first property auction today. The virtual world is a social space linked to crypto coin-based transactions. You can buy a patch of virtual land, build something on it, share that experience with friends and family, or even turn it into a profitable business.

Decentraland’s launch is emblematic of a kind of showdown happening in the VR world at the moment. As virtual reality headsets and mobile VR become more readily available and affordable, big tech companies such as Facebook and Microsoft are taking strides to claim what some see as an unfair share of an industry destined to be worth over $70 billion in a few years.

Proponents of decentralization say centralized VR platforms such as Facebook Spaces and Microsoft’s AltspaceVR will give their owners too much control over the content users consume.

Decentraland uses blockchain and smart contracts to make sure that users maintain exclusive control over their virtual worlds. Users on the platform will be able to create virtual neighborhoods and towns, populate them with unique virtual objects, and use them to meet with their online community for parties, social gatherings, corporate meetings, education, and other events, the company says.

“The ownership of items is cryptographically established on a smart contract, which prevents anyone from stealing or altering users’ property,” Ariel Meilich, Project Lead at Decentraland, explained. “Conversely, a centralized platform can very easily print more in-game currency, revoke item ownership, or even delete users.” 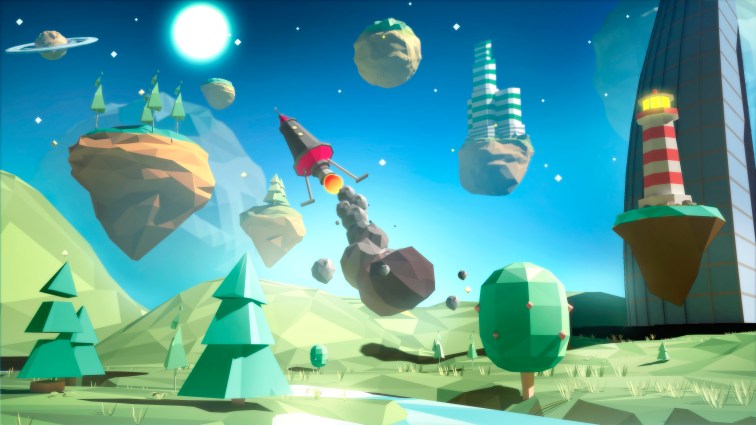 Above: Some possibilities for life in Decentraland

Decentraland held its initial coin offering (ICO) earlier this year, raising a total $25 million from 4,000 investors for its MANA tokens. The number of token holders — an indication of the number of people who will be buying virtual land in the platform’s first property auction today — has since doubled.

Users can create content for their virtual worlds with Decentraland’s online land editor. But they’ll have to wait until early 2018, when Decentraland releases the web client, before they can publish content on their land parcels and make them available to visitors.

Since Decentraland land parcels are limited in number, their value will increase if the platform gains traction. Virtual land owners can monetize their worlds by enabling advertisers to post ads or by renting it to others in exchange for cryptocurrencies. With blockchain and smart contracts handling all payments, there’s no need for a central authority to broker the deal between land owners and their customers. This ensures that users get fully rewarded for the profit their imaginary world generates.

“People will initially be uploading static content. The first use cases will be creative building and the trading of collectible items, as well as social experiences facilitated by voice and text chat,” said Meilich. “Over time we will implement scripting to allow for games and more dynamic applications.”

While blockchain will solve some of the problems that centralized social VR platforms pose, it has its own challenges to overcome. Blockchain currently faces a scale problem in storing high volumes of transactions. In recent weeks, high traffic on CryptoKitties clogged the Ethereum blockchain, which Decentraland also relies on. That’s why Decentraland only uses the Ethereum blockchain to store the ownership and exchange of VR land and content. The actual content uses the InterPlanetary File System (IPFS), a decentralized alternative to cloud storage.

Decentraland will also have trouble dealing with abuse. Companies such as Facebook and Google, which have total control over the content they host and have thousands of moderators on their payroll, are having a hard time identifying and removing abusive content.

“We cannot remove it,” Meilich said. “But people may choose their content filters and choose whether to see what curators deem to be offensive, pornographic, violent, etc.”

For the moment, there’s hope that a shared economy, where everyone shares in the costs, benefits, and reputation of the platform, will encourage the community to strive for the overall health of the content.

Decentraland is not the only company that is working on the intersection of VR and blockchain. CEEK VR, a company that manufactures VR hardware and runs a platform for hosting VR events, is using blockchain to enable artists to extend their reach and directly connect with thousands of fans across the world in VR performances.

With CEEK, singers and stage artists can host live VR versions of their concerts, enabling fans from across the world to enjoy the experience without physically attending the event. However, instead of using a centralized registration and payment platform, CEEK provides artists with tools to issue and sell their own crypto tokens, which fans can purchase to attend a VR concert. 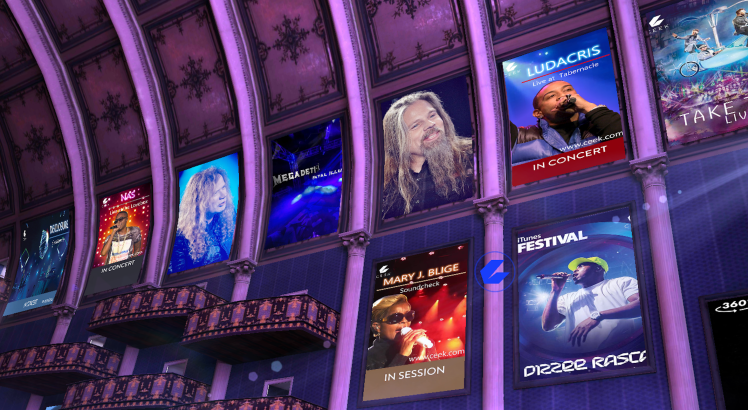 While CEEK’s VR platform has found appeal among artists such U2, Katy Perry, and Lady Gaga, anyone with talent and skill can use it to create and monetize VR experiences. For instance, a martial arts expert can launch a VR class on CEEK and sell admission to it through CEEK tokens. Meanwhile, developers can create VR environments and offer them as venues in CEEK’s blockchain marketplace. CEEK uses smart contracts to automatically distribute token revenue among different stakeholders that contribute to an event.

VibeHub, another decentralized VR marketplace, enables users to buy and sell various VR content on the blockchain with its VIBE token. This can be live VR events such as concerts, 360-degree videos, teaching lessons, and social meetups among others.

Like Decentraland, these blockchain VR platforms are still in their early stages. Time will tell whether blockchain’s decentralized organization model will give them the traction they need to take the lead from Facebook and other tech giants.