Night School Studio’s Oxenfree is an eerie ghost story wrapped in a coming-of-age tale about friendship, family, and loss. But its newest game, Afterparty, is more lighthearted. Its protagonists are Lola and Milo, two best buddies who find themselves in Hell. It’s slated for a PC release in 2019, with other platforms to be announced.

“After finishing Oxenfree, we wanted to build a world that accommodated characters from all walks of life,” said Night School cofounder Sean Krankel in an email to GamesBeat. “Most games dump people into a specific, overpowering dilemma, forcing the supporting cast to all share that dilemma. ‘We’ve all got to get off this ship before the alien kills us’ eclipses the fact that everyone on the ship is dealing with their own baggage back home. But a few rare games like [Lucas Pope’s Papers, Please] drop players into a cast of characters with wildly varying lives, forcing the player to deal with those disparate backgrounds. That was appealing to us.”

The Night School team told IGN that Afterparty focuses on Lola and Milo pub-crawling their way through Hell. The goal is to reach Satan, challenge him to a drink-off, and win a chance to go home. Krankel says he’s wanted to create a game set in a bar for a while.

“Adam and I would sporadically ramble to the team about how satisfying the bar sections of games like Grand Theft Auto, Red Dead, and Skyrim are,” said Krankel. “There was a real opportunity to juice that basic idea of a hanging in a watering hole. Drinking with your buddies is fun, and bars are immediately relatable because most players of legal age have their own crazy story from a night out. Maybe it ended wonderfully, maybe it was an awful experience, but everyone has a tale or ten from a bar crawl. So how could we tap into players’ personal memories of a drunken evening and amplify it? And how could we fill the world with interesting, funny characters from totally different backgrounds?” 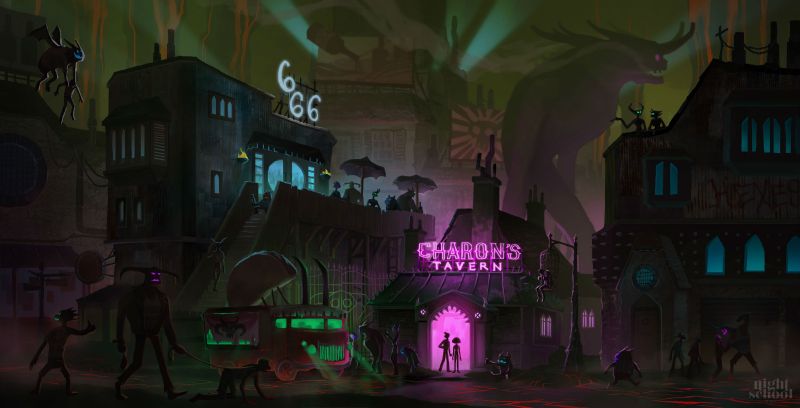 Afterparty’s version of hell isn’t all fire and brimstone. It draws inspiration from various cultures and beliefs around the world. It’s full of loud personalities. And Lola and Milo can let loose and belt out karaoke songs or climb up on tables.

“We didn’t want to lean too hard into familiar heavy metal Anglo-Saxon Hell tropes, if only because everyone’s seen pitchforks and fire for centuries,” said Krankel. “Afterparty’s Hell is intended to be everybody’s hell, a jambalaya of religions and cultures. For our team, there’s no fun in copying the stories we’ve all heard. We’d rather send you on a surreal road that builds on the familiar, but hang a hard left into our own weirdo corner of the universe.”

It sounds like Afterparty’s bars are truly interactive spaces that explore the intersection of all types of people from different backgrounds who have something in common: They want a drink. And, despite the cheeky fun premise, players will also learn some things about Lola and Milo. Krankel says that comedy is important and the team is aiming for “a Rick and Morty or Simpsons tone for the world,” but that doesn’t preclude the game from exploring deeper emotional truths about the characters.

“At its core, this game is a fantasy adventure. The game will react to players’ decisions and actions in ways that they have never seen in a game, wrapping it all up in debauchery,” said Krankel. “But it’s important to our team to anchor it in a strong emotional foundation, so we’ll absolutely explore heavier themes. This game takes itself less seriously than Oxenfree on the surface, but tackles just as many emotional road bumps of being a young adult.”