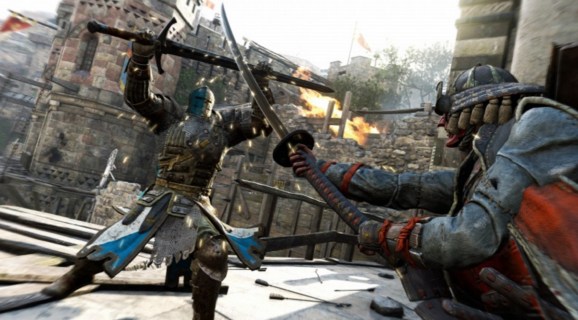 A French knight squares off against a samurai in For Honor.

Shoot-em-ups are a popular genre in video games. But Ubisoft wanted to make a “chop-em-up” melee game, and it had to think hard about how to create a new brand and a new kind of game with its launch of For Honor.

The responsibility for this task fell to the only marketing guy on the initial For Honor team. Luc Duchaine was the brand director of For Honor, the sword fighting game that debuted earlier this year. He gave a post-mortem talk at the 2017 Montreal International Game Summit (MIGS 17) about creating a new brand and intellectual property, which is something that Ubisoft does on a regular basis. But Ubisoft often stands alone in that expertise, as creating brand new triple-A games is increasingly rare.

Duchaine was on the team during its conception stage, reporting to the producer of the game, Stephane Cardin. For Honor was the brainchild of Jason VandenBerghe, creative director, who wanted to deliver a visceral combat game that showed what it was like to be a samurai, viking, or knight in a brutal battle. It was, he decided, what special forces soldiers would be like in the medieval times. The brand was about bringing that fantasy to life. 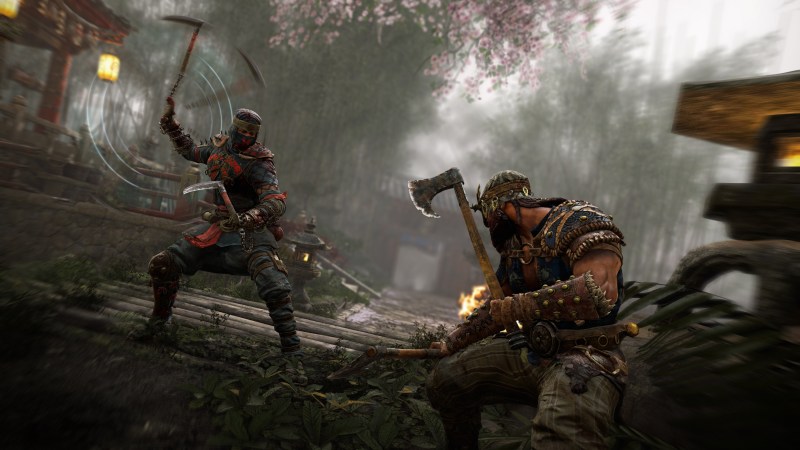 Above: For Honor’s shinobi.

They began their work as a team in the fall of 2013, when the project won internal approval. Duchaine wanted to get the branding right early on and create assets and previews that would convince players that they wanted to play the game and proselytize their friends. They did so by imagining the target players — like a recreational fighter or an elite esports athlete.

At the E3 trade show in 2015, VandenBerghe got up on stage and gave a speech that was 148 words long. Every word had been pored over for three months, and every gesture he made had been thought about in advance. Ubisoft then showed a live four-versus-four multiplayer match that culminated with a knight’s beheading.

“Would you turn and run? Would you stand and fight?” VandenBerghe said as he unveiled the game. The ultimate results were good, and the game sold well. 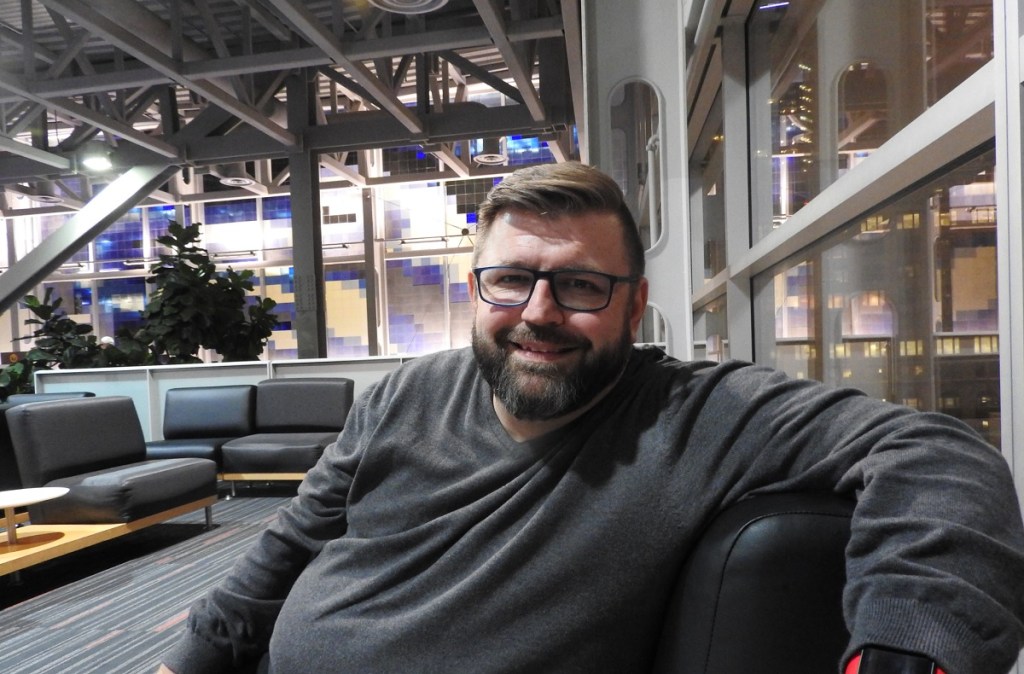 Above: Luc Duchaine was brand director of For Honor at Ubisoft.

GamesBeat: Are you here in Montreal most of the time?

Luc Duchaine: Yeah, I’m based in Montreal. I joined For Honor in the summer of 2013 as a brand director. I’m the marketing guy on the dev team. I have a marketing team with me. That’s a great thing about Ubisoft. We have marketing people embedded with the dev team, so we can start working very early on the long-term future of the brand, where we go with the brand.

GamesBeat: That sounds very unusual, that you would join the team so early.

Duchaine: For us, it’s usual. That’s how we work at Ubisoft. We have marketing people on every project, very early on. It has strong benefits. Quite early, you can work with the creative director, work with the producer, and try to identify the essence of the game. You have some time to influence as well — maybe this would be better for the game in the long term. I’ve been doing this for 13 years now.

GamesBeat: Do you report upward to the game director, then?

GamesBeat: Is there a game director as well on that level?

Duchaine: No, the producer is in charge. Then, you can have an executive producer if there are multiple projects under the same brand.

GamesBeat: What sort of input did you have that early on with For Honor?

Duchaine: The idea was already there. Where I worked a lot, with Jason for example — we looked at the core audience. We needed that for game design. Who do we design this game for? What features will please each player? We worked together to define those personas. That’s one place where I had some input. Also, when we came up with a sentence about the theme of the game — by working together, we managed to build the entire core idea around our communication based around that. When we did our demo at our first E3, I worked closely on the original idea for that, the original flow.

GamesBeat: When you have the four types of players, do you consider that to be fairly precise? Something you researched?

Duchaine: What we did, we had those personas. Then, moving on, we did some surveys to look at, is that accurate? We did research post-launch as well to try to identify who they were. There were some little differences, obviously. Some were done based on research we had done, and now, we had more data points to see if we were accurate or not. That helped us know — this type of gamer, for instance, we didn’t expect that to be so big, or we thought it would be bigger. 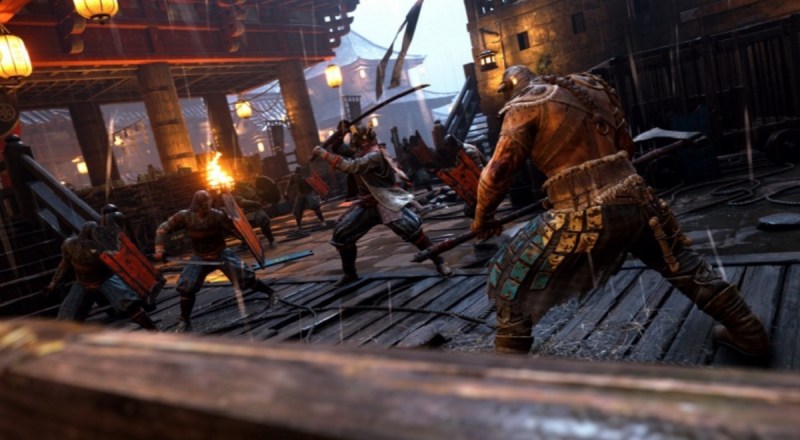 Above: Action in For Honor.

GamesBeat: Would you have maybe not gone forward without that, without that clear description of an audience? Why was it so important to identify that?

Duchaine: For me, it’s important because — maybe we would have come to the same point in the end. I don’t know. But it’s important for me, even when you design the game and when you build the campaign, to have this picture of who you’re making the game for. It helps to keep the focus. For me it was helpful to — OK, what would Mike think? One was named Chris. One was James. We tried to always bring in that thinking.

I’ve seen this at Ubisoft sometimes. People would print posters on the wall, to always keep that in mind. One thing that’s different now, the market is bigger. Game devs are no longer necessarily their own core audience. You always need to remember who you’re making your game for.

GamesBeat: The messaging at E3, the 148 words or so, you said that was something you looked at for three months. It sounds very meticulous. What kind of discussions were you having? Why was some of that wording so important?

Duchaine: The first discussion is, OK, what’s the focus of the speech? Where do we want to go with that? Having an overall direction for the speech. Once you’ve determined that, then you have other discussions. Do I want to go more here, more there, in this direction? Then, you have to write it down. Sometimes, you’ll compromise on certain things because the flow doesn’t work, or it gets too long.

We wanted something short, something more impactful, rather than going into too much detail. That’s not that point. At E3, you have Microsoft in the morning, EA before us, and then, Sony afterward. You have four big press briefings, seven hours long….