GamesBeat: You guys did the discovery tour as well. Did that impact what you were doing, or were you already creating everything before that?

Lacoste: The discovery mode is very interesting because we built this amazing huge world with a lot of rich environments, but when you play the game, you’re fighting bosses, fighting all these enemies. It’s pretty violent. But we wanted to bring the quality of the world to different people — like children or my grandmother. People who would be really interested in traveling in the open world. So, we had this mode where we deactivated everything violent, every challenge. It’s a way to use what we created and bring that to a different kind of application.

GamesBeat: Did that create a different feeling for the art team, creating something educational?

Lacoste: I worked with the mission designers creating all the tools for the app. We decided to choose certain locations at certain times of day, so we could get the best possible lighting to reveal things like the lighthouse at Alexandria or the pyramids. With the pyramids behind Memphis, it’s all about showing off the work done by the artists and the level designers, bringing that to casual gamers or people who don’t even play games. People who want to just enjoy the beauty of the world and the history. 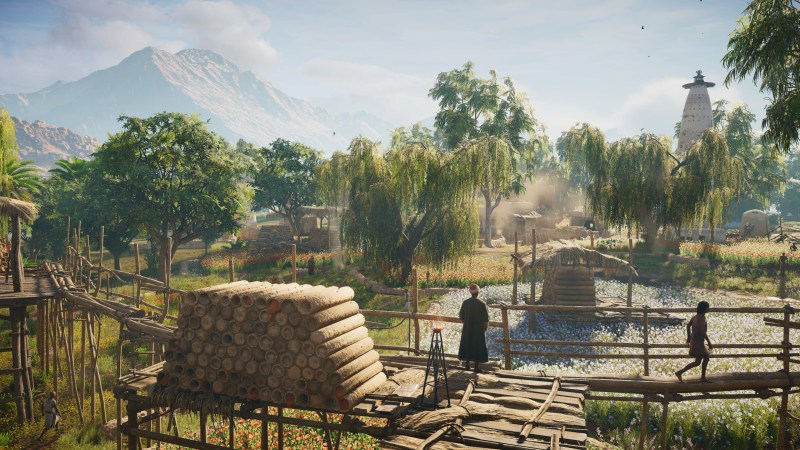 GamesBeat: Now that the game has been out, what have you heard as far as feedback about the art?

Lacoste: It’s been pretty good. We always have some glitches, and we’re fixing them all the time in title updates. Even when I play at home, I’m seeing stuff to improve. We’ve had time to polish the game, though, and we’re getting some pretty amazing feedback.

People are using the photo mode now and posting pictures. They tag me on Twitter a lot, so I can see their photos. I see a ton of them every day, people taking the time to make portraits of different things in the open world, the diversity of the open world, new outfits in different settings. The photo mode has been pretty huge. I think we’ve had a couple of million pictures taken so far? The server load is insane.

I’ve even had some feedback from people who’ve just played the game to be in the open world and walk around and take photos. Even from gamers. They just want to spend time exploring, which is pretty cool.

GamesBeat: Do people look around for any interesting anomalies or anachronisms in the world, stuff that isn’t exactly historical?

GamesBeat: One thing I wondered about was whether eagles were native to Egypt.

Lacoste: The eagle we have in the game is actually a Bonelli’s eagle. It’s native to this region. It’s from there. But for sure, sometimes we stretch a bit. As I say, we’re not making a documentary. We’re making a game. Sometimes, we stretch a bit to have a more interesting, impactful experience. But it’s pretty [well documented], pretty credible in terms of the environment, the animals. If you go out into the desert, you’ll run into snakes, hyenas, lions. In the swamp, you’ll meet crocodiles and, of course, the eagles.

GamesBeat: When you do that kind of world building, you can visit the place and do research, but what happens with things that aren’t there anymore?

Lacoste: It’s a challenge for all the creative people on the team. If you tell us to recreate a building in Montreal exactly in a game, that’s really not very interesting. But if you tell us, “OK, imagine how this place might have been 2,000 years ago,” it triggers our [imaginations] and creativity. That’s something we like to do. Origins was a very different challenge. 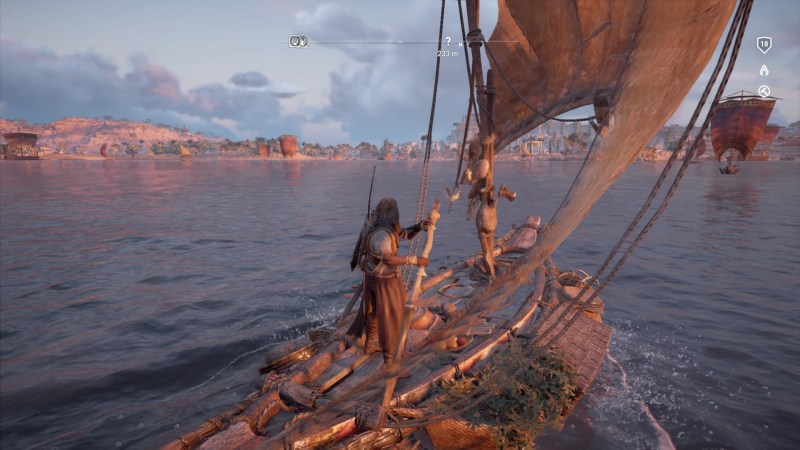 Above: It’s a beautiful day to go sailing.

GamesBeat: In something like a Pixar movie, they never have to build a complete world. If something isn’t going to be in the shot, they don’t have to build it. Do you have the same luxury in some ways, or do you really have to build everything?

Lacoste: Yeah, we have to build everything. That’s the big challenge. An open-world game is really about creating that 360 view. The challenge we have is not like in a linear game, where you can craft that linear ride. In an open-world game, we have to think about, say, what could be a generic asset that we could use to fill that 360 view of the world? It’s a different way of building things like landscapes.

GamesBeat: Do you have any other solution besides just throwing lots and lots of artists at the problem?

Lacoste: We’ve created new procedural techniques for Origins. We used new tools to fill the landscape with things like rocks and grass and trees. But every time we discover a location, the locations are handcrafted. If you come on a village or a city or a point of interest, that will be crafted by a level designer, a level artist. But if you’re in the open desert, open jungle, the swamp, a huge place, we used procedural tools to set up some visual rules, a basic recipe around a certain kind of [tree], a certain kind of [bush]. That can fill a huge amount of space.

GamesBeat: So, that makes the art tasks a bit more manageable?

GamesBeat: You must go crazy trying to keep track of it all.

Lacoste: We have a lot of directors, too [laughs]. I have assistant art directors in all the different studios. We do regular reviews. I’m lucky because they’re all very good guys. They can manage their teams. We have a team in Singapore, a team in Montpellier, France, a team in Shanghai, a team in Sofia, Bulgaria. A lot of different teams, over four years.

Disclosure: The organizers of MIGS 17 paid my way to Montreal. Our coverage remains objective.