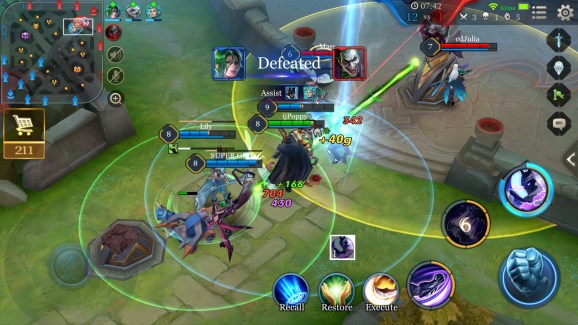 Earlier this year, Chinese gaming giant Tencent opened up North America registration for its hit mobile multiplayer online battle arena Arena of Valor — and fans won’t have to wait for much longer to play. In a broadcast today, it announced that Arena of Valor will be rolling out servers in North America and Latin America tomorrow on December 19. It will be available on both iOS and Android.

Arena of Valor pits players against each other in 5-vs.-5 combat in a fantasy world. It’s similar to the other MOBA juggernaut, League of Legends, developed by Tencent subsidiary Riot Games. Its numbers, however, are staggering: Over 200 million people have registered, and it boasts up to 80 million daily active users.

Arena of Valor isn’t the only mobile MOBA in the game. Super Evil Megacorp has raised $63 million for its cross-platform title Vainglory, and it’s hosted a number of esports events such as the Vainglory World Championship. Super Evil’s entry is 3-vs.-3, but it will be rolling out a 5-vs.-5 mode soon.

In addition to opening up the game to players in the U.S., Canada, and Latin American countries, Tencent is working on bringing Arena of Valor to the Nintendo Switch at a date to be announced.