Founded out of London in 2013, DigitalGenius connects with companies’ CRM and customer service platforms to train AI assistants using transcripts from historical customer service interactions. Using these learnings, the AI is able to predict relevant meta-data about a new case in real time, and even channel a query to the most relevant (human) team members based on the content.

It’s more about helping human customer service personnel respond quickly to queries using historical precedence, so that when a message is received over email, social media, or other text-based messaging platforms, DigitalGenius can suggest the best answer for an agent to approve. In theory, the model should improve with each human interaction. 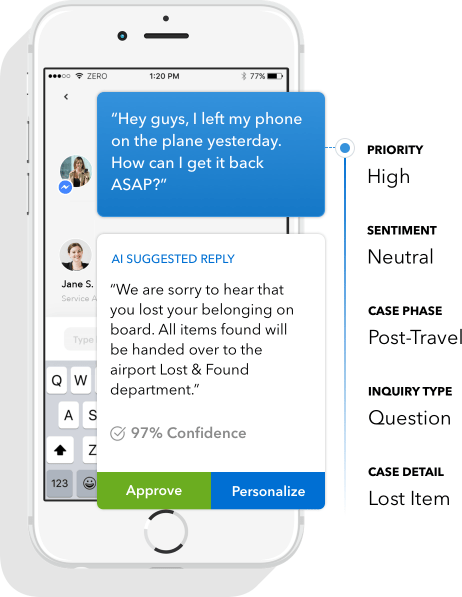 The startup has now raised $26 million in total since its inception, and with its latest cash injection it plans to “fortify its position as the leader” in practical applications for AI in customer service, according to DigitalGenius founder and CEO Dmitry Aksenov. In real terms, this means that it plans to fuel commercial expansion, and push ahead with plans to automate more repetitive elements of workflows in contact centers.

DigitalGenius is one of a number of companies working toward automating or enhancing customer service through AI, including San Francisco-based Augment, which recently raised a $5 million round, while stalwarts such as LivePerson and Mattersight are also working on technology around personalized chatbot communication tools.

Though much of DigitalGenius’ raison d’être is about aiding humans in contact centers, the company is also working toward “full automation” in customer service. Indeed, DigitalGenius has been working with airline giant KLM for more than a year already with its hybrid AI-powered suggestive approach, but moving forward, KLM will be using full automation for some of its online responses to customers.

While more complex questions will still get the human treatment, KLM said many of its 30,000 online customer discussions each week are basically covering similar ground, and therefore it’s now looking to fully automate its answers to certain kinds of repetitive questions. In short, when contacting KLM through WhatsApp, Twitter, or elsewhere, soon there is every chance you will be chatting to a bot for the entirety of the conversation.

“By using artificial intelligence, KLM makes conversations with our customers even more timely, correct, and personal,” said Pieter Groeneveld, senior vice president for digital at Air France-KLM. “This is what characterises KLM. Heavy snowfall in the Netherlands last week caused a significant increase of the number of questions on social media. Passengers obviously expect a timely answer. With the use of AI we support our service agents with technology and should be able to answer many more questions in a shorter period of time. This is exactly what the customer needs.”

DigitalGenius told VentureBeat that several of its customers already use full automation for elements of their customer service, but KLM is its biggest one to date to make the switch.