Amazon’s Alexa has long had games inspired by Batman, SpongeBob SquarePants, and Jeopardy, but today, as Echo Buttons go on sale for the first time, Amazon is introducing its first accessory for multiplayer gameplay. At launch, Echo Buttons work with voice app games like Fourth Down Football Trivia with Philip Rivers and Sounds Fun with Mike Epps. Developers will be able to incorporate Buttons into their own games and skills in the future. But Amazon doesn’t just want its AI assistant to play voice-only games from the Alexa Skills Store with rudimentary Buttons. 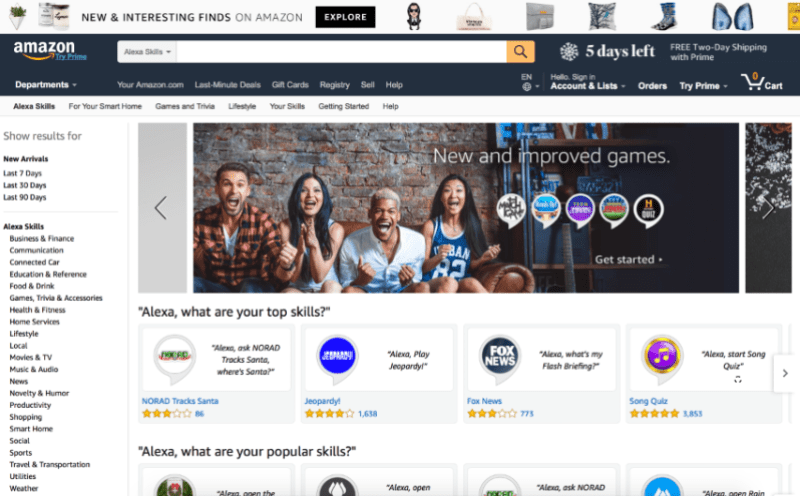 Above: A game advertisement is the first thing you see when you enter the Alexa Skills Store today

In recent weeks, Amazon has stepped up its ambitions to be a part of gamers’ lives with offerings from Activision Blizzard, Twitch, and its first board game. And in the year ahead, Alexa will continue to make gaming experiences with Alexa a larger part of its offerings.

The push comes as Amazon begins its expansion into enterprise with Alexa for Business, and it follows a recent Alexa expansion into more than 80 new countries.

Games may even play a role in perks for tens of millions of Amazon Prime customers. In October, Double Jeopardy became the first Alexa skill with a paid subscription fee. A month later, one-time payments for Alexa skills appeared, bringing payments to additional skills, all of which are games. Amazon began to pay Alexa developers for any engagement that their skills delivered, starting with game companies.

In another major step into gaming, Amazon launched the Twitch Alexa skill last week. You can use it to play a channel by name or ask for content based on the game or category, like “Alexa, ask Twitch who’s playing World of Warcraft.”

Today, the Alexa skill can stream live audio of a channel (that sounds useless) or stream video to an Echo Show — the Echo with a seven-inch display first made available in July. Since Amazon acquired Twitch in 2014, it’s strange to think streaming Twitch video is just now coming to the Echo Show, but it comes at a precarious moment for the device.

As Amazon continues to haggle with Google over YouTube for Echo Show or Echo Spot, Twitch, which Amazon owns and which has 100 million viewers a month, could become one of the largest and most popular streaming video offerings available to Echo devices.

Perhaps most important, the Twitch Alexa skill is one of the first to deliver proactive notifications, telling its users with its voice or lights that their favorite channel has started streaming. Whether through Alexa or phone notifications, once a user gets a notification that a favorite steamer is live, they can ask an Alexa Fire to begin streaming video.

Alexa, the personal assistant for gamers

In 2018, as Amazon gives developers more ways to make games, Alexa’s gaming prowess will grow beyond voice apps to include board and video games.

In a taste of what’s likely to come, Activision’s Destiny 2 (the PC, PlayStation 4, and Xbox One online shooter is one of the best-selling games of 2017) got its own Alexa skill for in-game assistance.

“Alexa is now part of the Destiny 2 experience, and we’re excited for what that means for Destiny 2 players and the future of games and voice technology,” Alexa VP Steve Rabuchin said in an Activision statement. “Gaming is an example of where voice can create a more engaging experience in a natural and delightful way for customers. Rather than interrupting gameplay to navigate menus, players can just ask Ghost through Alexa to help with certain tasks. Players love the Destiny 2 experience, and now Alexa can make it even more immersive and fun.” Next year, Alexa will begin to take part in its first board games, acting as a guide for When in Rome, which serves up trivia from locals in cities around the world.

Also anticipated to grow in 2018 is the Gadgets API for developers who want to make gaming experiences with Echo Buttons, and the Gadgets software development kit (SDK) to encourage game companies and tech hardware makers to create devices other than Buttons that can interact with Alexa.

In the first year or two of smart speakers like Echo being on the market, tech giants often shut down questions about whether their AI assistant would get a visual interface by saying it was designed to be voice-only. As Alexa takes her first steps beyond being a voice-only personal assistant — and beyond the home into environments like the workplace — it’s clear that in the years ahead, Amazon wants Alexa to become a personal assistant for gamers as well.