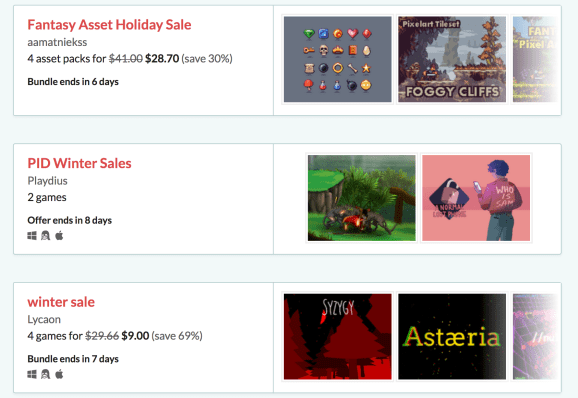 Indie game platform Itch.io is home to a lot of smaller games and enables developers to set their own pricing, such as asking fans to “pay what you want” instead of having a set price. Yesterday, it launched its first site-wide sale, which will run until 10 a.m. Pacific on December 26.

Developers have a lot of leeway on the site and have banded together to create bundles and discounts on their own terms. For instance, 128 creators contributed their work to A Good Bundle, which had different price tiers similar to Humble Bundle’s model and ranging from $2 to $20. People posting their games can run their own sales whenever they want, but Itch.io’s content director Spencer Hayes says this is the first time they’ve tried running a site-wide event.

“I wish there was a crazy ideological reason why we haven’t done this before but I guess the reality is that we’ve been hands off about organization promotion,” said Hayes in an email to GamesBeat. “We’ve asked developers in the past to run sales, but this time around, we want to turn it into an event to help connect developers and their audiences. Furthermore, because we’re a completely open platform, it can be a big challenge for us to get a lot of smaller creators to promote their games. Events like this can guide them in the right directly while encouraging them to use the tools we’ve built for that purpose, including running their own sales or hosting their own co-op bundles.”

Itch.io’s featured bundle is a mix of indie darlings such as Amanita Design’s puzzler Samorost 3 alongside lesser-known titles like Alex Camilleri’s autobiographical Memoir En Code: Reissue. The site has 73 other bundles right now, some from indie publishers like Plug In Digital and others from developers like Bedtime Digital Games. Developers can also assign a goal to how much money they’re hoping to raise through holiday sales; for instance, indie dev Heather Robertson is looking to make $100 from her discounted game Secret Spaces.

“The idea behind the bundles isn’t, ‘Hey, here are a bunch of games for cheap,’ but [it’s] a convenient way for folks to find games that we believe in,” said Hayes. “There aren’t a ton of numbers that go into determining what games will be in the itch.io Selects bundles but a genuine belief that these are games that people are going to like. Hopefully that’s not too sappy.”

Valve’s game platform juggernaut Steam has a reputation for its frequent seasonal sales. Its annual winter sale should start later this week (December 21). It’s sparked some discussion around whether or not it devalues games and if it hurts or helps developers.

Hayes says that Itch.io isn’t running promotions frequently, which will prevent “race-to-the-bottom pricing” where developers feel like they have to constantly lower their prices. Similar to Steam, it also enables developers to set their own prices and sales duration.

“We haven’t pushed developers to go lower than their previous discounts or do anything they’re not comfortable with. Every discount you see on the site was one set by the developers,” said Hayes. “That said, I think some level of discounting is healthy and allows developers to reach out to customers who aren’t able to buy games at full price.”