Appodeal found in a report that rich interstitial ads (which display an ad for a few seconds before disappearing) and rewarded video ads are the most popular formats in mobile apps and games.

Appodeal released its in-app advertising monetization performance index for the first time today. It ranks the performance of mobile ad networks and analyzes the ad rate trends of several ad formats in different regions of the world from January 2017 to November 2017. The index measures performance data of more than 60 ad demand sources from 69 billion impressions and 30,000 apps.

The report found that the rich interstitial was the ad format with the highest monetization power in almost all regions. Its new variation, in the form of playable ads — which allow you to start playing a game once you click on the ad — increased engagement rates and suggests this could be an enduring format.

“Since 2018 is right around the corner, now is the perfect time for mobile app publishers and developers to reflect to make sure their apps are on the right track for monetization success in the upcoming year,” said Pavel Golubev, Appodeal CEO, in a statement. “This index should help them decide with confidence which ad networks and ad formats to use in 2018 for the best monetization results.”

The report also found that rewarded videos, where a user gets a reward in the form of virtual content in a game or app in exchange for viewing a video ad, have grown a lot in 2017, particularly on the Facebook Audience Network and Google’s AdMob. The report said eCPMs (effective cost per mille, or ad rates) showed explosive growth. 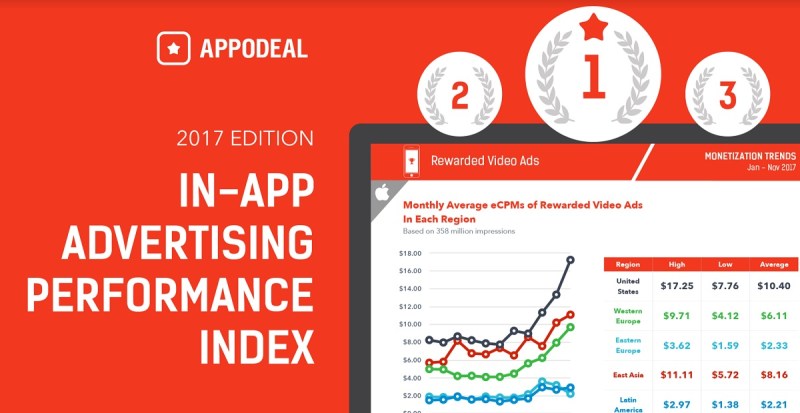 Meanwhile, banner ads are still alive. Despite being one of the earliest ad formats and being on the lower end of eCPMs, banner ads have endured as the second-highest revenue generating format across all regions.

Appodeal said that AdMob dominated the revenue generated and ad fill impressions with banner and rich interstitial ads, no matter the region.