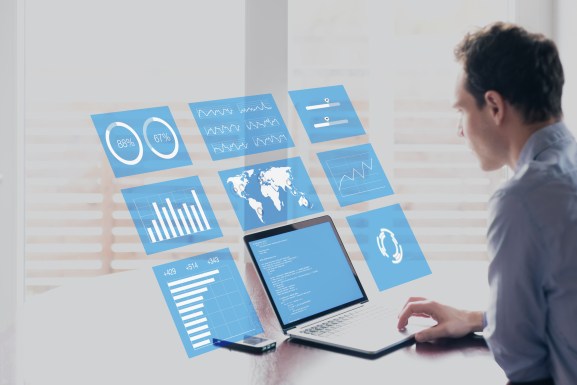 During Apple’s fourth-quarter earnings call with analysts, CEO Tim Cook said, “AR is going to change everything.” He wasn’t exaggerating.

Augmented reality (AR) is shaping an entirely new paradigm for mass technology use. We’ve quickly evolved from typing on our PC keyboards, to the point-and-click of the mouse, to the smartphone’s tap or swipe, to simply asking Alexa or Siri to do things for us. Now AR brings us to the age of holographic computing. Along with animojies and Pokémon and face filters, a fresh and futuristic user interface is emerging.

Holographic computing is coming to us now through our phone screens instead of via lasers, which are required for textbook holography. As a result, we’re now seeing a real surge in the use of hologram-like 3D that will completely change how we interact with the world — and each other.

The evidence of this coming shift is everywhere. Apple’s iOS11 puts AR into the hands of over 400 million consumers. The new iPhone X is purposely designed to deliver enhanced AR experiences with 3D cameras and “Bionic” processors. Google recently launched the Poly platform for finding and distributing virtual and augmented reality objects. Amazon has released Sumerian for creating realistic virtual environments in the cloud. We’re also seeing an AR-native content creation movement and a steady stream of AR features coming from Facebook, Snapchat, Instagram, and scads of other tech players.

The captivating user experiences of 3D are obviously attractive for gaming and entertainment, but they’re capable of so much more. And as familiarity with the holographic experience spreads through popular games and filters, this new interface will begin to dominate other functions that are well-suited to its charms.

Training – Holography is useful for virtual hands-on guidance to explain a process, complete a form, or orient a user. It also can simulate real-life scenarios such as emergency response, sales interactions, etc. AR enhancements can be overlaid for greater depth and variety in information presentation, such as floating text bubbles to provide detail about a particular physical object, chronological procedure mapping for performing a task, or virtual arrows pointing to the correct button to push on a console.

There’s less need to travel to a classroom if you can launch interactive, immersive 3D presentations on any desk, wall, or floor and “experience” them through the screen in your hand. And unlike standard video, holographic interfaces add an extra experiential element to the training process. As a result, users can more readily contextualize what they are learning.

Customer experience – Consumers are using AR and holographic computing for self-selection, self-service, and self-help. Soon they’ll be using it for even more. For example, IKEA’s AR app lets you point your phone at your dining room to see how a new table will look in the space. Why not just point your phone at the shipping box to be holographically guided through the assembly process when it’s delivered? Holographic computing will also emerge as the preferred means of getting product information and interacting with service agents. Walkthroughs of hotel rooms and vacation destinations with a 3D virtual tour guide/travel planner/salesperson are not too far in the future.

Many other appealing use cases exist, of course. And as this new user interface matures, it will be preferable and will quickly become second nature.

The sheer amount of money being thrown at speedy development by a number of different players shows it’s not yet clear who will define the ultimate holographic interface. Will it remain phone-based? Involve glasses? Shift to desktop? Evolve beyond our current hardware with on-eye projection technology? All of the above? Who can say?

One thing we do know is that significant brain trust is being invested by companies of all types to leverage this emerging technology. And we will see mass adoption and widespread affinity for the holographic interface.

Simon Wright is director of AR and VR at Genesys, maker of omnichannel customer experience and contact center solutions. He is based in Sheffield, England and can be reached at simon.wright@genesys.com.