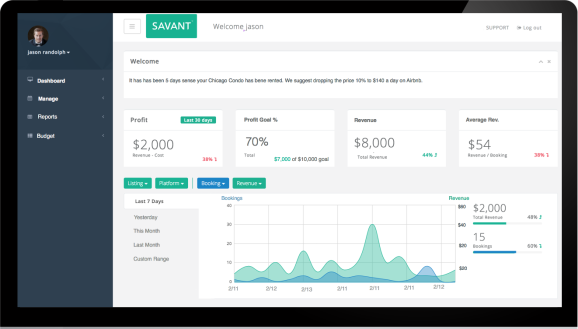 For those who work for several gig economy platforms, like Uber, Airbnb or Turo, keeping track of earnings can be overwhelming when they are coming from so many different companies. Calculating tax rates on those earnings and filing them correctly can be even more daunting. That’s the need Savant is looking to address.

The Chicago-based online platform, which launched in beta mode in December, is designed to help gig economy workers track their earnings and efficiently file their taxes.

Though Savant has just recently become available to users, the founders have been building it for nearly a year, said Randolph, the company’s CEO.

“We’ve seen a huge trend toward the freelance space, but even more specifically, into the platform economy,” Randolph said. “The challenge we observed and identified very early on was that while these businesses are very similar in how they’re structured and how they need to be managed, there wasn’t a tool to manage the taxes and accounting.”

There are currently more than 12 million platform workers (called that because they hook up with clients via a platform such as the Uber app) in the U.S. and Europe, and the group is expected to grow by 800 percent, generating more than $325 billion, by 2025, according to the Brookings Institution.

Savant can integrate data from gig economy platforms directly into its own, allowing users to see their earnings and other financial information quickly and easily. It can also calculate tax rates on those earnings and provide an easy way for users to file those taxes.

“What Savant allows individuals to do is see exactly what their tax obligations are on a daily basis, based on how much they’ve actually earned, and it considers external income as well,” Randolph said.

Using the app isn’t just convenient, Randolph said — it can also help gig economy workers make more money over time, as Savant gives users suggestions on ways to maximize their earnings. For example, if a user is going on vacation, the app will suggest they put their home on Airbnb, or if they’re renting out their car to someone on Turo, Savant will suggest they rent out their now-vacant parking space.

“One of the ways to really grow in the sharing and gig economy is being able to have broader exposure on [multiple] platforms,” Randolph said.

Users can sign up for free, though Randolph said a premium membership will be rolled out later this year that includes more advanced features. A mobile app is also slated to launch in 2018. Savant currently has more than 400 users.

The team, which consists of two full-time and two part-time employees, mainly work out of the tech incubator 1871. The startup has raised $100,000 in funding and is in the process of raising another round, for a total of about $1 million.