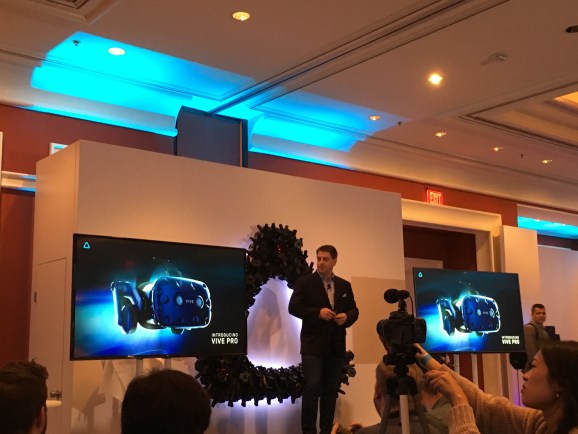 HTC announced its new Vive Pro headset at a press conference today ahead of this week’s Consumer Electronics Show. It features integrated speakers and a higher resolution than its current Vive headset. HTC also unveiled its HTC Wireless Adaptor, which will enable users to connect their Vive Pro or Vive headsets to their computers without any cables. The Vive Pro does not have a release date or price yet, but the Wireless Adaptor will roll out this summer.

The Vive Pro shares some similarities with the Vive Focus headset that HTC launched in China. It will come with two OLED 2,880-by-1,600 displays and a 3K resolution, improving on the existing Vive headset by 78 percent. The integrated speakers will replace HTC’s Deluxe Audio Strap, which users have to buy as a peripheral for the Vive. The Vive Pro will also come with dual microphones with noise cancellation to improve communication for multiplayer VR experiences.

While HTC didn’t note the price for the new Pro, it does sell the Vive Focus standalone headset in China for about $605.

HTC’s Wireless Adaptor will use Intel’s WiGig technology to turn the Vive and Vive Pro into wireless headsets, which is crucial for making VR a more comfortable experience for users. Many VR companies have set wireless headsets as their goal. Oculus is currently working on its Santa Cruz headset. TPCast has developed a third-party wireless adapter for the HTC Vive and Oculus Rift.