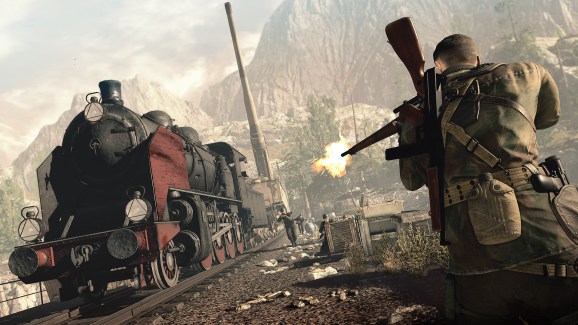 Radiant Worlds gets on the Sniper Elite train.

Rebellion has just added some new talent to its workforce to help it complete some upcoming projects. The studio, which is best known for the Sniper Elite series, has acquired SkySaga: Infinite Isles developer Radiant Worlds and its 70 employees. Radiant Worlds is changing its name to Rebellion Warwick, and it will begin contributing to ongoing projects immediately.

Rebellion did not disclose how much it paid in this deal.

SkySaga is a Minecraft-like multiplayer online game with crafting and adventuring. It is no longer under active development, and this left Radiant Worlds without a clear plan for its future. Now it’s working on Rebellion’s upcoming cooperative adventure Strange Brigade that is the publisher’s next game. Rebellion chief executive officer Jason Kingsley will have its new Warwick team also work on Sniper Elite, Evil Genius, Battlezone, and other properties in the future.

This acquisition comes as Rebellion turns 25 years old and just had a relatively large success with the release of Sniper Elite 4 in 2017.

“It’s been a great year for us and we have a lot of plans to help make 2018, 2019, and beyond bigger and even greater years for Rebellion,” said Kingsley.

As part of this acquisition, Radiant Worlds chairman and chief operating officer Richard Smithies will leave the studio.

“We’ve managed to build one of the financially strongest and most talented development studios in the U.K.,” said Smithies. “I wish everyone now working with Rebellion every success for the future.”