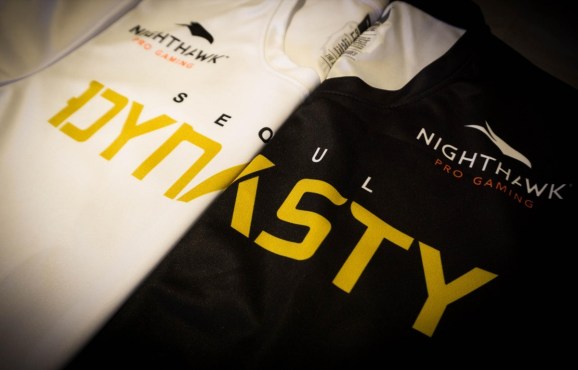 Netgear is heading into esports territory as it is announcing today it will be the sponsor for the Seoul Dynasty team in the official Overwatch League that kicks off this week.

The Overwatch League has generated a lot of hope that esports will become a mainstream sporting event. Market researcher Newzoo estimates that it could be a $2.5 billion industry by 2020, and one of the ways that will happen is through sponsorships.

Netgear wants to establish deeper ties with players, particularly in light of the launch of its Nighthawk Pro Gaming router and other gaming products in its lineup. The Seoul Dynasty team is owned by KSV Esports, which former Kabam leaders Kevin Chou and Kent Wakeford started last year.

“We like it because they are committed to working with us and our team,” said Wakeford in an interview with GamesBeat. “It’s an important moment, as they are a big name coming into esports.”

Netgear will have its corporate logo on the Dynasty jersey. And it will have other opportunities to raise its awareness during Overwatch League broadcasts. It aims to show off the new Nighthawk router and switch, which target esports pros who want super-fast networking for online games.

“Nighthawk has long been a brand recognized by gamers for high-performance networking hardware,” said Heidi Cormack, senior vice president of global marketing for Netgear, in a statement. “With the company’s enhanced focus on developing products specifically for gamers with our Nighthawk Pro Gaming category of products, we wished to show our ongoing support and commitment for the gaming community through esports sponsorships, specifically with the Overwatch League’s Seoul Dynasty.”

Netgear will get a percentage of the green-screen ad placement during live broadcasts. And Netgear will have a presence as a sponsor in a video series profiling the team’s players.

The Overwatch League will have a city-based structure, which supports engagement and a deeper connection to local fan bases around the world, and Seoul Dynasty represents the franchise in Seoul, South Korea.

The inaugural season of the Overwatch League begins with the first regular season match on January 10, 2018, and runs until June, with playoffs and finals scheduled for July. Pre-season play began in December with a series of exhibition matches featuring the inaugural 12 teams.