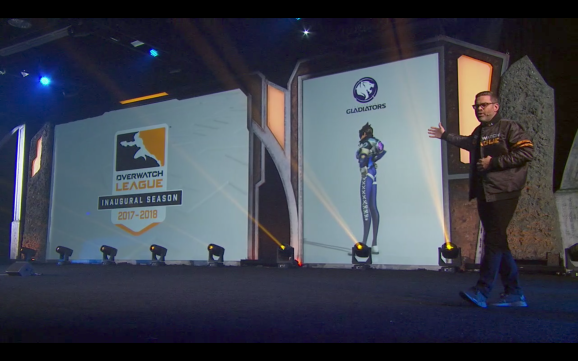 If you plan on watching the Overwatch League when its inaugural season kicks off Wednesday, you’d better be sure to tune into one place — and it’s not CBS or ESPN. It’s Twitch.

The livestreaming company announced today that it’ll broadcast every match of the Overwatch League. It begins with Wednesday’s 4 p.m. Pacific tilt, the historic first match between the San Francisco Shock and the Los Angeles Valiant. You can check the full season schedule here. It’ll also broadcast streams in French and Korean. This two-year deal for exclusive broadcast rights includes playoffs and championship matches.

Other opening day matches include the Shanghai Dragons vs. the Los Angeles Gladiators, with the Dallas Fuel taking on the Seoul Dynasty in the nightcap.

According to Sports Business Daily, Twitch paid over $90 million for these broadcast rights.

The Overwatch League has the chance to remake esports. The league is set up like NBA or the NFL, with teams associated with cities over esports clubs or organizations (such as Cloud9, which runs the London Spitfire). Players have contracts to ensure they’re making money, giving them more time to concentrate on practicing than hustling for cash.

This agreement also builds on the existing relationship between Twitch and Blizzard Entertainment, the publisher for Overwatch (which is a game for the PC, PlayStation 4, and Xbox One). In June, the two companies announced a deal involving tournaments for the publisher’s big multiplayer games: Hearthstone, Heroes of the Storm, and Overwatch. This appears to dovetail into that previous announcement.

Yet the league does face some hurdles: Tracking site Esports Earnings reports that Overwatch wasn’t in the top 5 in 2017 — it’s a world in which League of Legends, Dota 2, and Counter-Strike: Global Offensive dominate. And those three are also the top games on Twitch, according to market researcher Newzoo, with Overwatch coming in at No. 4.

The first season runs from Wednesday until June, with the playoffs hitting in July. Twitch will also offer rewards to viewers: in-game Overwatch League-theme items.

Blizzard Entertainment, the publisher of Overwatch, will use another partner for showing matches in China, Twitch said.

It makes sense that Twitch is the exclusive home for the Overwatch League. The streaming site, an arm of Amazon after a 2014 acquisition, is the most popular place to watch live esports, be it on the web or on mobile or even consoles. And while Blizzard has a partnership with Facebook for streaming people’s gameplay, the world’s biggest social network isn’t where folks go to watch esports. That’s Twitch.

Maybe it’ll start the Wide World of Esports next.