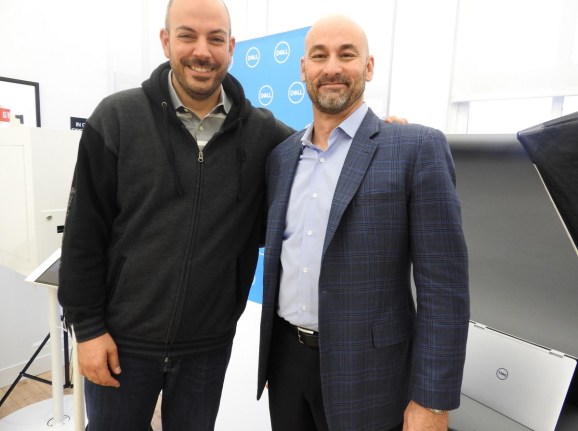 Intel and Advanced Micro Devices recently got together to design their central processing units (CPUs) and graphics processing units (GPUs) in a more compact space within a laptop. One of the prime beneficiaries of that is Dell, which is launching a 15.6-inch 2-in-1 laptop today using the Intel-AMD combo chips.

I caught up with Dell executives Frank Azor — who oversees the Alienware, XPS, and gaming businesses — and Darrel Ward, the senior vice president of commercial client solutions at Dell. The company is revealing a bunch of new products today at CES 2018, the big tech trade show in Las Vegas. I went to a preview event and talked with the executives about their lineup, and Azor addressed the idea of making laptops smaller and more power-efficient while at the same time making them capable enough to run high-quality games.

Ward talked about how Dell is launching a recycling program where it gives its excess gold to Nikki Reed, an actress and a jewelry designer, who is using them in her works of art. 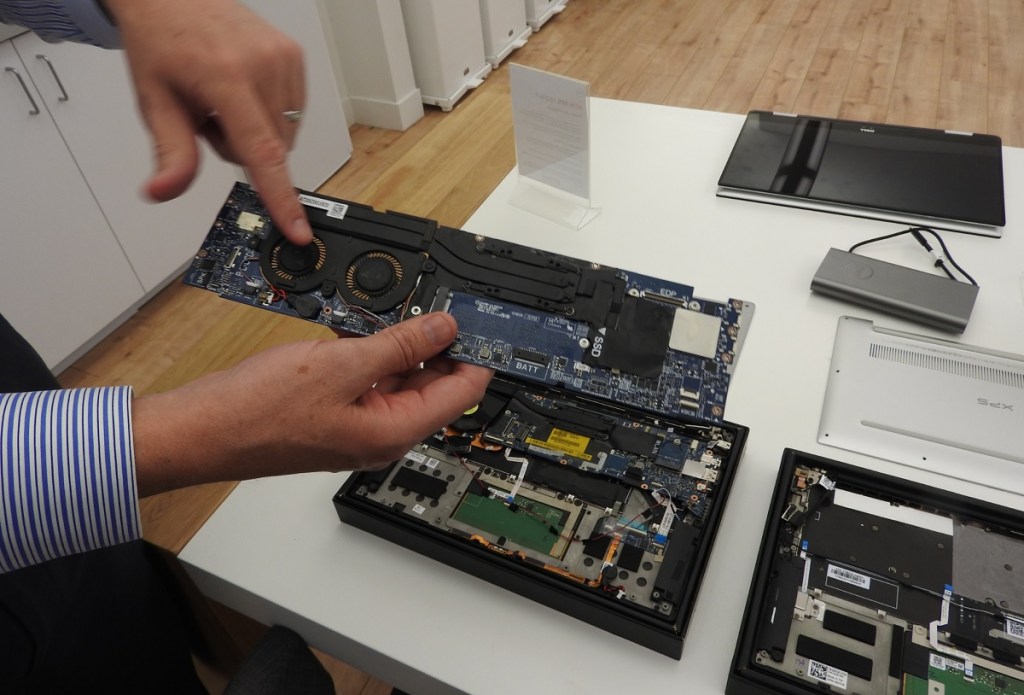 Above: Inside the Dell XPS 13 laptop.

VentureBeat: What are you thinking about CES and the upcoming season?

Frank Azor: I’m excited for us. We’re going to have one of the strongest showings at CES that we’ve had in the last two or three, and we’ve had some strong showings in the past. If you look at what we’re bringing to the show, to the market, and to our customers, it’s a level of innovation that extends beyond just devices. We’re looking at customer use cases and how we remove friction, how we provide customers with a better experience based on how they’re using the device, more so than just making the device a little smaller or nicer-looking.

Those are elements of what we’re bringing, but we’re also bringing product solutions like Alienware Command Center, the new version, which concentrates on how you use your system, around the games you play and the machine complementing that usage, versus just being software that lets you turn the knobs and flip the switches. When you look at Dell Mobile Connect and what that solution offers, it’s centered around reducing the frustration of having to manage two devices every day. When you’re in a PC mode and you’re working or learning or consuming content in that mode, Dell Mobile Connect keeps you in that frame instead of taking you out of it to switch back and forth to your phone. We think it’s a very valuable solution for that reason.

When you look at what we’re doing with Dell Cinema, a ton of customers now are streaming content on their laptops and desktops. In many cases more than they’re watching on smart TVs, even. That’s their preferred device. I don’t think any company has created an effort, and is going to create a level of awareness like we are at CES, around the investments we’ve made across the three pillars that affect that experience: the visual pillar, the audio pillar, and the streaming and networking pillar.

We started with a very strong device innovation message in prior years at CES. That strategy has worked well for us. We’re growing and winning awards like crazy. We’re now the top recommended PC, in some cases above even Apple laptops. That’s a huge accomplishment. Now we’re taking it to the next level while everyone else is trying to catch up.

VentureBeat: It looks like a few of these things are about taking out the wait, taking out the latency in the system. If you’re starting up Netflix, things like that.

Azor: Not only with the startup, but—there’s so much stuff going on in the background now with PCs. Your Windows updates are coming in behind the scenes, your antivirus updates. How many times do we click automatic updates, auto-patch my games, stuff like that? We’re giving up control in a lot of ways, making it seamless and frictionless, but someone has to come in and prioritize that internet pipe. What do you want first? The machine’s not smart enough to figure that out.

We’re saying, “When you’re streaming, that’s priority one, over every other traffic going through the NIC or the wi-fi card.” That’s one of the components of what Dell Cinema is going to do. It takes the use case of streaming content from the internet and designing for and to it, specifically. Just like we designed our gaming systems specifically for gamers.

VentureBeat: How do you think this stacks up against new ideas like what Microsoft and Qualcomm are talking about, their ARM-based systems? They billed it as instantly available, always-on internet.

Azor: When you look at the value equation those solutions offer, we don’t see them being very divergent from the value proposition we’ve been delivering with products like XPS and our top Latitude products for several years. Our top end XPS products deliver more than 20 hours of battery life. They support technologies like modern standby. They sleep and resume in a second or two.

Those platforms come with some compromises, the new Qualcomm platforms. They’re exceptional in battery life, granted, but their performance isn’t necessarily on par with the performance we’re delivering in our XPS 13. We’re going to wait and see. If customers flock to it and love the value proposition, if they find a value beyond what we’re delivering with XPS 13 and 15, with our Latitudes and other products, then it’s easy for us to go off and cater to that. But we think we have a superior solution at this time.

They didn’t talk about performance very much at the Qualcomm event. When you look at the performance, especially in Win32 apps—like, wait a minute, I thought Y-Processors from Intel weren’t that successful or that popular. This is worse than that. We’ll see. I don’t have all the benchmarks yet, but nothing comes for free. There’ll be a tax one way or the other. I think it’ll be interesting once people start to understand details. 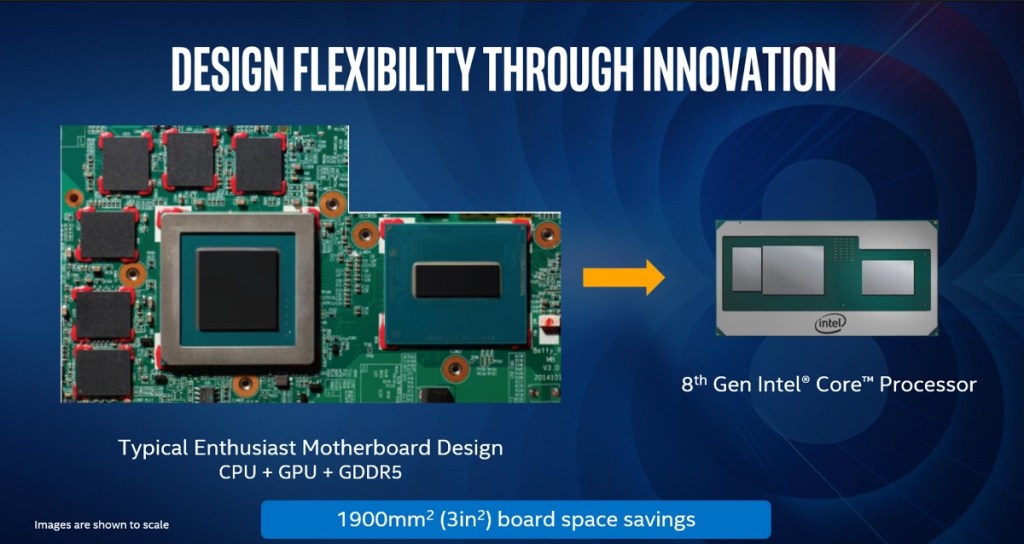 Above: Intel and AMD teamed up on a new way to make compact laptops.

VentureBeat: What do you think of this Intel/AMD product?

Azor: Obviously we’re very excited about it. We’ve jumped all in with them on it. We built an entire platform wrapped around the architecture. It’s amazing, in my opinion, the milestone of our industry that would bring us to this. Two enemies working together to build this. It shows a customer-first mentality. I wish we could apply that in other industries. Two companies coming together to build a solution that’ll provide a better computing experience. It’s phenomenal.

We’re getting a thinner form factor, smaller overall form factor, lighter weight. Because of those benefits we can put in more battery life, more features in the product, more performance. That’s a win for everybody involved. I only hope we see more designs like that in the future. It’ll help us create thinner workstations, potentially, thinner gaming systems. For customers in the already-thin form factors that they love today, maybe they’ll get even more performance, because they can start benefiting from graphics performance like never before.

VentureBeat: Is there a niche for that versus what you would usually do with Intel/Nvidia solutions? What, within this module, makes it more attractive?

Azor: It’s the package size. When you take the total math of designing two discrete architectures and the supporting circuitry around them—look at XPS 15, the notebook. Incredibly popular notebook, extremely successful. It’s become the design point for thin and light gaming systems and a lot of other systems out there. That’s as good as we can do. It’s about 15 percent, maybe 20 percent thicker than the new XPS 15 two-in-one – not because we left any fat in there, but just because with that discrete architecture, that’s as small as we can possibly make it.

What this offers us is the ability to go to that next level. To really get there you have to fuse those two pieces of silicon into one. You get a smaller overall package size. It allows us to design a more efficient board overall.