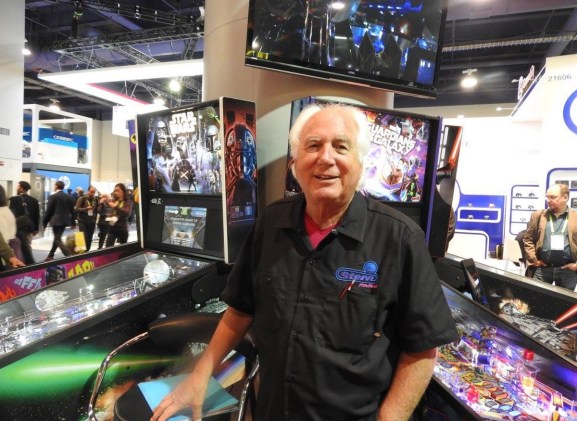 Gary Stern has been making pinball machines at Stern Pinball for decades. While that seems like an antiquated business, it’s growing in a big way thanks to our obsession with everything retro.

Enthusiasts have nostalgia for the pinball games that they grew up with, and they’re buying the $5,000-plus machines to play in their homes. They’re also playing them at Barcades and other places that are putting old arcade machines into place.

And most important of all, they’re bringing new people into the church of the silver ball, introducing pinball to friends and family.

I interviewed Stern at CES 2018, the big tech trade show in Las Vegas this week. He was showing off new Star Wars and Guardians of the Galaxy machines, which I got to play for a bit.

Pinball has been Stern’s life. His father owned Williams, the pioneering pinball company. And Stern started Stern Pinball in 1986. He sold his firm to Sega in 1994, and then bought it back in 1999. 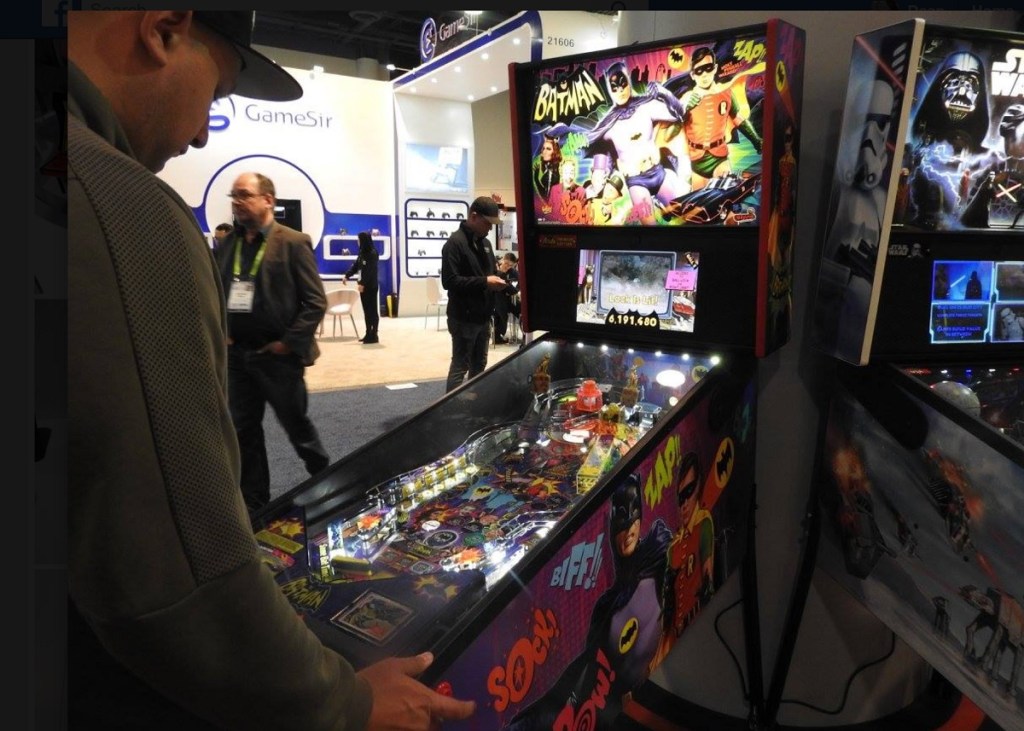 GamesBeat: What do we have here? Some new machines?

Gary Stern: We have many machines here. This is our newest, Guardians of the Galaxy. This is the premium version. We have the pro version around the corner there. We make three new cornerstone games a year. Then we make some vault editions and some studio games. That’s where someone brings us a design.

The cornerstone games are our bread and butter, so to speak. We make a pro version, a premium version, and a limited edition version. The pro version is the basic game. It’s a lot of game. Our customers — we have three segments, so we have different versions, because one size doesn’t fit all.

We make games for operators who put them in barcades, in family entertainment centers and what have you, all over the world. We also make games for enthusiasts and collectors. Collectors might be people who have many games. Enthusiasts might be competitors. And then we make games for what we call rec room buyers. Somebody like you, you’ve got a rec room, you want a pinball machine next to the pool table. You tell your wife it’s for the kids, and the kids end up enjoying it quite a bit.

The pro version, the regular version, is going to retail over $5,000. Then we make a limited edition, maybe 500 — they’re numbered and signed by the designer — that retails closer to $9,000. The premium, which has all the extra features of the limited edition, but not all the extra eye candy — for example, this is a premium Star Wars. It has a second set of ramps here. It has a Death Star that opens. It has an accelerator ramp that you don’t see in the pro version. So we have a B-to-C business for homeowners, and B-to-B for operators.

We export almost half of our games. We’re very much in Europe, in Australia, a little bit in Russia, a little bit in Israel, a little bit in Dubai. We just started to sell complete games, made in the Chicagoland area, to China, instead of building there or buying games from there. We have a 110,000 square foot factory. We employ almost 300 people. We’re making games every day. We also make accessories. Just like you’d trick out your Harley-Davidson, you can trick out your pinball machine.

GamesBeat: What’s done the best for you lately?

Stern: Well, they’ve all done good. They’re all my children. Star Wars is obviously a phenomenal title. We did great with Ghostbusters. We just brought that out on the Nintendo Switch, because our games are also available digitally — Oculus, PS4, and so on. Ghostbusters is our first on the Switch.

GamesBeat: Is that whetting the appetite for a real machine?

Stern: The young people, the millennials, they go to the barcades, but they get their knowledge and their gameplay from the smartphone, let’s say, and the different consoles. So yes, it does a number of things. It makes a little money for us, although not a lot. It introduces the game to people. It lets somebody learn a game, because the digital games are exactly the same — the same artwork, the same game rules, the same physics and geometry. They’re not fantasy games. They’re real. 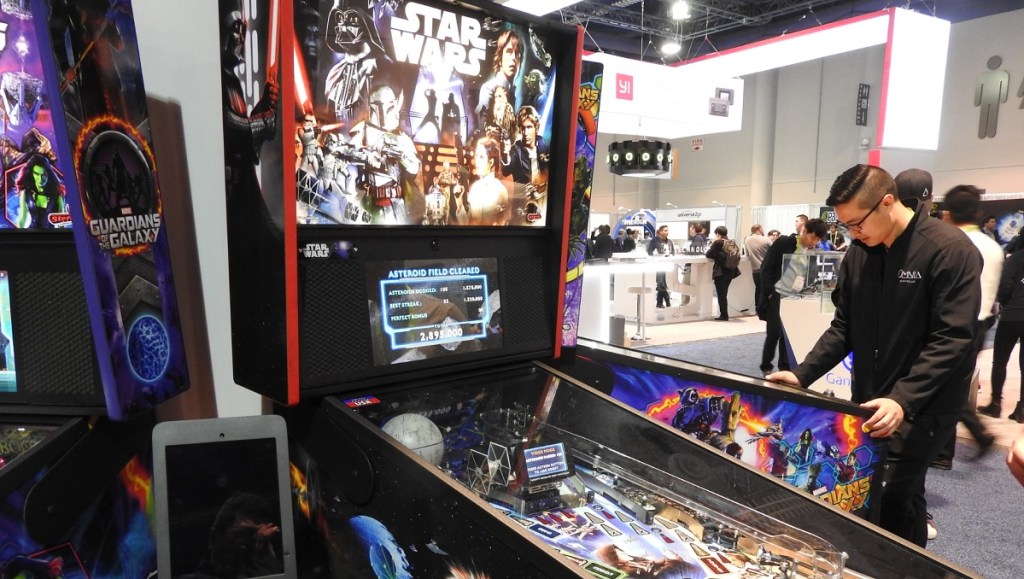 GamesBeat: It’s interesting to see the mix of nostalgia and young people in the market.

Stern: It’s growing. It’s more retro than nostalgia. I try to differentiate those. In 2017, the number of games we made went up 40 percent from 2016. 2016 was up 40 percent from 2015. Part of it is we’re educating people that pinball still exists. We go to events like this, shows like this. We’re not selling a lot of games here – a few here and there, maybe. The real purpose is to educate the press and educate the world.

Our business is up. We’re going into more areas of the business, more areas of pinball. We’re going to have a Stern Pro Tour. There are players—the IFPA, the International Flipper Pinball Association, ranks 50,000 players in 30 countries.

GamesBeat: You have an esport going.

Stern: I mean, we have colleges giving scholarships for esports. Those are programmed games. This is a bal 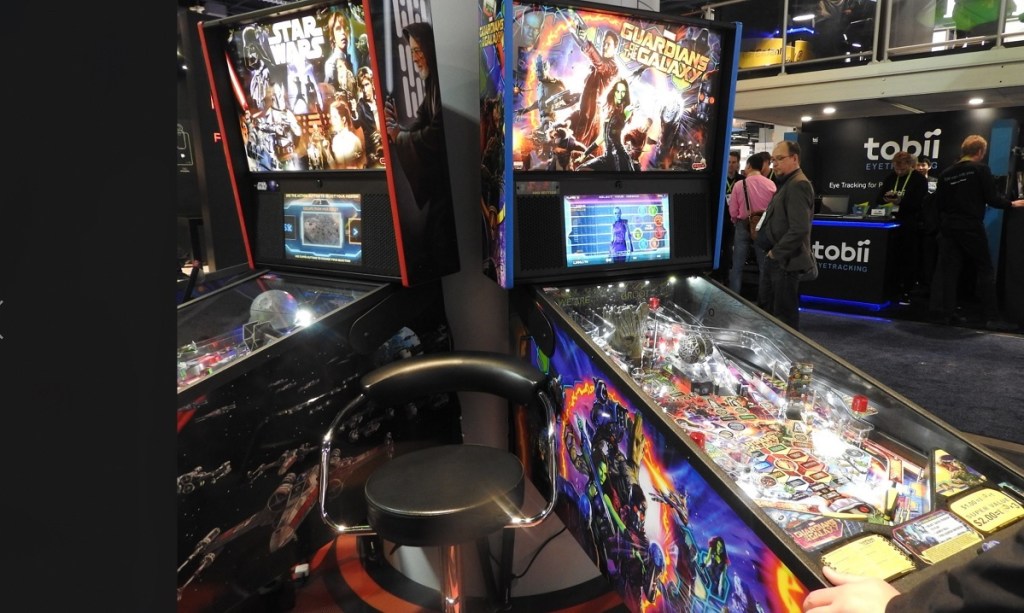 l and bat game. You keep your eye on the ball, like tennis, baseball, whatever it is. You get better as you play it. It just takes some extra quarters and you’re going to get better. The professional aspect of it is getting even more interesting. So we’ll have the Stern Pro Tour starting soon with hundreds of thousands of dollars in prizes.

GamesBeat: Are you planning to broadcast that as well?

Stern: I have to tell you, going to pinball tournaments and watching the finals, sometimes it gets really interesting, really intense. Especially when they put a monitor that’s showing the playfield itself. You hang a camera over it. Then anybody standing out in the audience can see what’s going on. Somebody loses a ball, something happens, it’s like the football game last night. It’s the same thing.

GamesBeat: As far as platforms go, are you still upgrading?

Stern: A few years ago, we started switching from what we call our Sam system to our Spike system. Sam was my father’s name. Then we made the Spike 2 system. We were in a matrix system — a light matrix, switch matrix — but now this is a bus system. It has a very small PCB in it, no fluorescent lights. There are LEDs connected to the PCB to light that backglass. Then you have a data line to semi-smart boards down there. Just like a car used to have a cable down there.

Stern: Absolutely, yeah. But now we’re going to do more things. We want to be able to communicate back and forth with the machine, download code updates, upload into the cloud so we can have competitions across territories, all kinds of things. We’re working on the next generation.