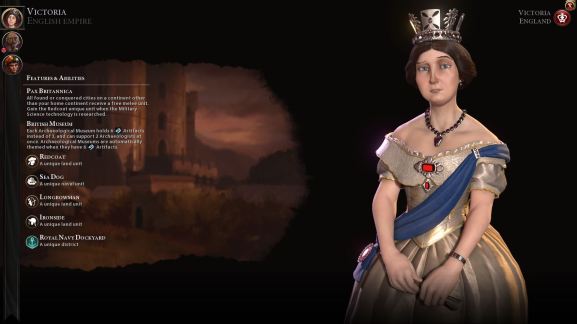 Victoria always looks like she's ready to either throw shade at you ... or fart.

When Civilization VI debuted in October 2016, I played it, and I enjoyed it. And then I stopped playing a few weeks after launch. This was earliest I’d ever abandoned a Civ game, the build-your-empire franchise that first debuted in 1991. For nearly 27 years and over 40 million games sold, the six games in the PC franchise (along with some console and mobile side-quests like Civilization: Revolutions) have dominated my gaming time.

But that ended with Civilization VI. Even with the changes to cities with districts, the more cartoony and fun art style (come on, who doesn’t love this Teddy Roosevelt, even if he’s slimmer than Firaxis’s original take on the 26th U.S. president), and better AI, it didn’t get its hooks into me. I only played about 70 hours before I set it aside. That’s not a lot for Civ. Remember, this is the series that spawned the “one more turn” meme about playing until 3 a.m. to see how your civilization expands and waiting to finish off that research project.

Over the holidays, I decided to see what the modders were up to on Steam Workshop … and I fell into a Civilization VI hole, playing about 110 hours since. I added mods that fixed some of the early-game issues, like a simple one that gives you a builder when you start, and another that serves up an overhaul of trading system between world leaders.

And this is why I love PC gaming so much — people taking a game and making it better, without the devs getting involved (even if the Rise and Fall expansion is coming soon). Modders see problems and are fixing them. They’re bringing new content on a regular basis. I only wish I could pay them for it.

Hmm … maybe it’s time to see what the The Elder Scrolls V: Skyrim community is up to.

2018 is here — so it’s time to talk about the biggest games on our radars. Jeff and Mike bring you the scoop.

Sega’s strategy developer is back with more battles for you to re-create. Creative Assembly announced Total War: Three Kingdoms today with a cinematic trailer. This latest entry in the real-time military sim series will put players in charge of managing armies of fighters in 190 CE China. It maintains the dynamic battle system that has […]

Razer’s recently released Android smartphone could end up as its next laptop. The company revealed its Project Linda concept today at the 2018 Consumer Electronics Show in Las Vegas. Linda is a hybrid laptop dock for the Razer Phone. When you connect the two devices, the phone powers a 13.3-inch screen, a full-sized keyboard, and […]

If you plan on watching the Overwatch League when its inaugural season kicks off Wednesday, you’d better be sure to tune into one place — and it’s not CBS or ESPN. It’s Twitch. The livestreaming company announced today that it’ll broadcast every match of the Overwatch League. It begins with Wednesday’s 4 p.m. Pacific tilt, […]

Netgear is stepping up with new products for gaming and the Internet of Things. At CES 2018 this week, the company is introducing a speedy router and switch for gamers, as well as a baby monitor and a security solution for connected products. The San Jose, California company is known for its switches and routers, […]

As more developers consider diversity as an important factor in hiring, the more of these game makers believe that publishers aren’t doing enough to facilitate diverse hiring practices, according to an International Game Developers Association survey. Fewer IGDA respondents say that companies are doing enough to promote diversity than in 2016. Those same survey takers […]

Intel disclosed more details of how it will combine its new 8th-generation Core H mobile processors with a semi-custom Radeon Graphics chip from rival Advanced Micro Devices in a way that enables computer makers to create smaller and faster laptops. Dell and HP are the first computer makers to use the new solution, which combines […]

A famous so-and-so once said ‘to err is human,’ and they weren’t wrong. We all make mistakes. It’s how we learn and improve, but when the pressure’s on it can be hard to rationalize our slip ups as anything other than the end of the world. (via Gamasutra)

How to get started with PC gaming in 2018

NThe PC remains the best platform for gaming, whether it be for esports, graphics fidelity, and even massive multiplayer experiences. There are hundreds of thousands of titles available and digital distribution services like Steam and GOG make it easier than ever to build a game collection without leaving the house. We’ll run you through how to set up and configure your PC, get started with said digital stores and get the most out of Windows 10 for all things games. (via Windows Central)

NZXT introduces its first motherboard with a customizable color scheme

CES is always good for a surprise or two, and there have been a few already. However, one that we truly didn’t see coming was NZXT’s entrance into the motherboard market. Well, it happened—NZXT today unveiled the N7, an LGA 1151 motherboard based in Intel’s Z370 chipset. (via PC Gamer)

The history of PC gaming is littered with companies that thought they could get cloud-based streaming services up and running. From the famously failed OnLive to Sony’s somewhat lackluster PS Now to Nvidia’s still-in-beta GeForce Now service, no company seems to have cracked the code to getting streaming to work for games in the same seamless way that services like Netflix and Hulu made it work for videos. (via The Verge)

I haven’t found a reason to jump back into Skyrim because I only have so many hours in a day and a life to live. But I can’t help but feel a little curious about checking out the huge, upcoming mod, Lordbound, after seeing this new teaser trailer showcasing some of the new environments this mod will add to Skyrim. (via US Gamer)