Mixi’s mobile game Monster Strike was the top grossing app in 2017, according to mobile data and insights company Sensor Tower. The caveat, though, is that Google Play isn’t available in China — the stomping grounds of tech giant Tencent, which recently released its hit title Honor of Kings with the name Arena of Valor in the West. In outside gaming, Netflix’s app was the highest earner, dethroning Spotify, which sat at No. 1 in 2016.

The mobile market generated $58.6 billion last year, thanks mostly to games. The category accounted for $48.3 billion of spending, and many of the top titles maintained their dominance from earlier years. Games like King’s Candy Crush Saga and Supercell’s Clash of Clans debuted in 2012, but they still landed spots at No. 5 and No. 9 respectively in the top grossing chart. 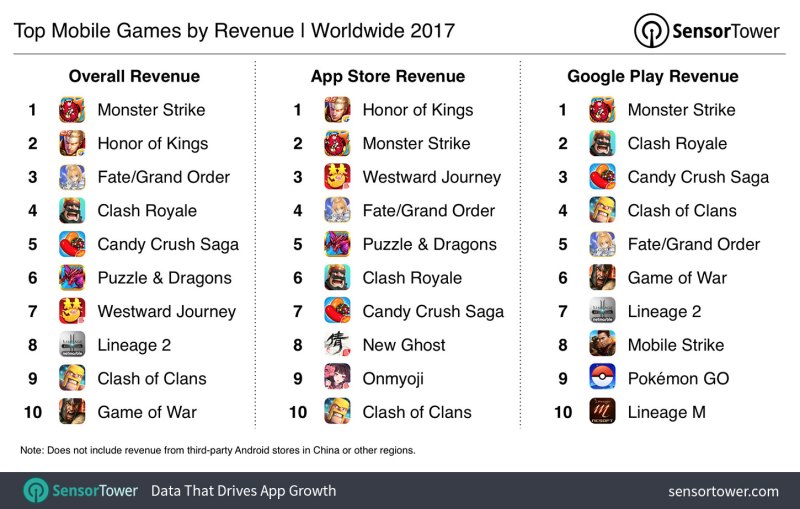 Niantic’s viral sensation Pokémon Go was missing from the top charts last year, but the company is still rolling out new content to keep its dedicated fanbase happy. The AR creature capturing game was the most downloaded mobile title in 2016, but Kiloo’s Subway Surfers earned the No. 1 spot as the most installed game in 2017.

Unsurprisingly, Tencent was the top grossing mobile publisher in the world last year. In second place was NetEase, another Chinese juggernaut which has jostled for the No. 1 spot in previous years.

Tencent also racked up the most mobile game downloads overall, though Facebook had the most non-game and overall downloads.