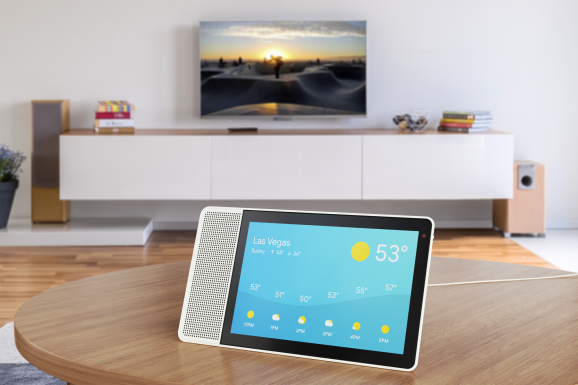 Google revealed this week that Assistant is coming to new touchscreen devices from LG, Sony, JBL, and Lenovo. The four smart speakers — which debuted at the Consumer Electronics Show (CES) in Las Vegas –feature voice commands and screens and will be able to make video calls and serve up things like YouTube videos, directions, cooking help, and your favorite photos. They also represent Google’s first attempt to compete against Amazon’s Echo Show and Echo Spot. Both Amazon devices were made available for purchase last year.

In their haste to get ahead of other tech giants expected to release smart speakers this year — like Samsung, Apple, and Facebook — Google and Amazon have been pushing product debuts, internationalization, and expansion into new verticals. Since late September, both companies have released more than half a dozen new products that put their AI assistant at the heart of the customer experience. Both have asserted that they want their assistant everywhere, and they seem to agree that today’s battleground falls into three major categories: the home, the car, and the workplace.

At CES this year, we heard a lot about Google’s efforts to put its AI assistant in homes with LG and GE Appliances, and in cars with Android Auto integration. Little to nothing was said by either company about the workplace, which is no surprise since CES is a consumer trade show, but touchscreens will give Google Assistant a new form factor to compete with Alexa for enterprise customers.

Putting Echo smart speakers in offices has meant the ability to do things like control smart devices in meeting rooms or easily bring up calendar information. And an AI assistant combined with a visual user interface will be far more useful in a business environment than current voice-only applications.

As Google VP Scott Huffman told VentureBeat in an interview, the new line of devices will open up a variety of use cases for Google Assistant.

Given the number of products Google sells to enterprise customers today and the existing competition between Google and Amazon in verticals like the home, car, and hotel room, it’s clear Google will make a larger play with Google Assistant for the workplace.

Aside from smart speaker market leaders Google and Amazon, Microsoft has been in the workplace for years now, and it brought Cortana to Windows 10 devices in 2015. Today, more than 600 million PCs already have Cortana inside. Microsoft is also working on enterprise voice app skills that users can speak with through the Harman Kardon Invoke smart speaker, a Cortana team member told VentureBeat.

Cortana has some exclusive LinkedIn and Office 365 features and can do things like add events that include coworkers to your calendar. But Amazon is beginning to challenge Cortana’s PC monopoly as Alexa integrations with PCs from Lenovo, Acer, Asus, and HP were announced at CES.

Cisco joined the workplace assistant competition last fall and now wants its Spark Assistant to offer business performance metrics with voice commands during meetings. Cisco hopes its Spark Assistant and third-party meeting bots will eventually take meeting notes, anticipate workers’ needs, and even play a role in interpersonal relationships. While Cisco may not be a name you often hear mentioned in discussions of AI assistants, with hundreds of thousands of existing meeting endpoints, it’s one that should be taken seriously.

Touchscreen devices with visual third-party voice apps could be one way Google and Amazon carry the popularity of their voice interfaces from the home to the workplace. Both are trying to draw a distinction between the way these devices perform on say, an Android or Fire tablet with Google Assistant or Alexa inside and the performance via a Chromecast or Fire stick. Both also seem interested in creating unique visual interfaces for smart speakers on a screen, and it’s easy to understand why.

A year or two from now, a smart speaker with a screen could offer more in the workplace than video chat — providing a conversational interface for things like insightful CRM data from Salesforce and sentiment analysis from video chats with clients or drawing from a growing list of cloud AI services.

With Google Assistant on a smartphone, after a question is answered you’ll see suggestions that anticipate follow-up questions. Suggested tips will be part of the experience on these new Google Assistant devices, too. Imagine this feature trained with employer questions to improve business performance.

These kinds of features paired with visual skills from third-party developers could become part of the new work station, alerting sales associates when their numbers dip, or, as Cortana does today, automatically generating to-do-list items based on tasks assigned to you in emails.

Maybe Satya Nadella was right when he said in 2016 that conversational computing would become a central part of what developers do and change the definition of computing for everyone. Tech and hardware makers sure seem to believe that is the case.

As the fight to become the go-to workplace assistant begins, it’s hard to imagine Google won’t make a major push for companies to adopt devices with its assistant, much as Amazon did with Alexa for Business. That push will likely lean hard on the importance of the kind of visual and interactive experience first glimpsed at CES this week.