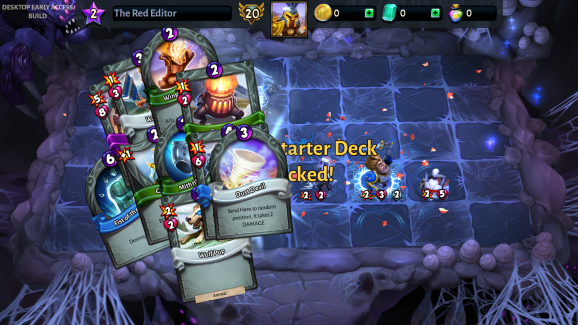 Robot Entertainment has spent the last several years dealing with rampaging humanoids with the Orcs Must Die! franchise. But it also has another well-received series, Hero Academy, a tactical game that appeared on iOS, Android, and Steam way back in 2012 — and it’s launching the sequel today.

Hero Academy 2 is now available in the iOS and Android app stores and as a PC early access game from Robot Entertainment’s site. It’s a free-to-play title, and it still involves you taking teams of warriors to battle on a map — gameplay that was entertaining enough to bring its predecessor 6 million downloads over three platforms. The sequel expands this with deck-building. You create your teams of fighters, mages, and more with cards, swapping units and spells into and out of your lineups.

Robot Entertainment is working with BonusXP in Allen, Texas. This is the studio that put out the recent Stranger Things mobile game. In an interview today with GamesBeat, CEO Patrick Hudson said that his crew turned to BonusXP for help because they knew them from their days at Ensemble Studios, the strategy game house that’s the predecessor to Robot Entertainment.

“We didn’t expect it to take as long as it did [to get back to Hero Academy]. We got occupied with Orcs Must Die!” he said. “A couple of years ago, friends across town at BonusXP reached out, ‘We got a tactics card game, but we’d be interested in making it a Hero Academy franchise game.’ We started brainstorming, and we both got excited to work together, a chance to work with a team we trusted.”

Hero Academy won acclaim back in 2012. DICE named it its mobile game of the year, and it found favorable coverage — and a market in China. “Everyone in the industry was playing,” Hudson said. “It was an industry darling.”

But people fell away from it. You took a team of units into battle against other players, with turn-based asynchronous combat … and it could be minutes or hours (or more) between you making your play and your opponent responding. Hero Academy 2 ditches that for real-time turn-based battling. It also has single-player campaigns and other gameplay. You form a deck of 30 cards from two houses at launch — The Council, the Dark Elves, and the Wardens (powerful elementals) — and neutral cards. These represent units, gear, and spells.

You start with a hand of 5 cards, and while it doesn’t have a mulligan phase, you can discard one card a turn and draw another at no cost. You spend mana to play your cards, as in other games like Hearthstone, but you start with 5 points of this resource, not a mere 1. Leftover mana carries over each turn, so if you play an archer that costs 3, next turn, you have two more. The goal is to destroy your enemy’s crystal on the map.

Hero Academy launches with two sorts of randomized card packs, basic and premium. It has two currencies, the lower gold and more premium gems, and you can earn both in-game.

The costs break down as follows:

You can also craft cards, so if you want specific units or spells, you can use crafting materials you earn (or acquire from breaking down cards) to make the ones you want.

Hero Academy 2 also has a ranked ladder, and seasons are one-month long. It has tournaments as well. Hudson said that players would organize their own tournaments in Hero Academy, and this is one of the many ways Robot Entertainment is applying what it learned from the original to the sequel.

It’s not releasing in China, Japan, or South Korea yet, but one of Robot Entertainment’s investors is Tencent, the Chinese-based gaming giant. But considering China was Hero Academy’s second strongest market behind the United States, don’t be surprised to see it coming there in the near future.