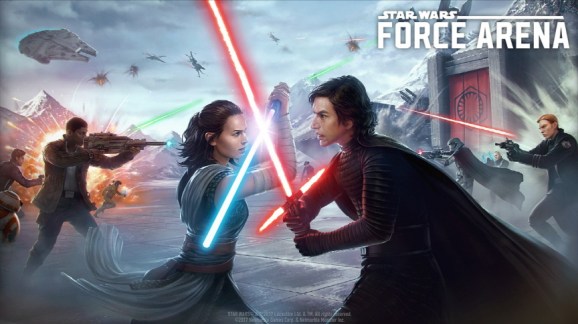 Netmarble Games is celebrating the one-year birthday of Star Wars: Force Arena with an in-game event that will run until January 25 on iOS and Android. Players can collect characters from the recent Star Wars: The Last Jedi film as well as an “anniversary coin” item. Netmarble has also revealed that 6.5 million players are active in Force Arena, most of whom reside in Europe and North America. As of publication, it ranks No. 42 on Google Play in overall games, and No. 98 in strategy games on the Apple App Store, according to market researcher App Annie.

Force Arena features iconic Star Wars characters such as Han Solo, Luke Skywalker, and Leia Organa. To compete in its real-time multiplayer combat, players select a faction leader and build a “deck” of characters — which cards represent — to support them on the battlefield. Players can decide if they want to play as the Light Side or Dark Side.

Netmarble’s anniversary event isn’t the first time it’s integrated more content into Force Arena; last February, it rolled out some quality-of-life updates that tweaked the reward system and added new units. Its take on the Star Wars universe has competition from titles like Electronic Arts’s Star Wars: Galaxy of Heroes, a mobile role-playing game that got its own The Last Jedi content in December ahead of the film’s debut. The Force is also with PC and consoles, where EA’s embattled Star Wars: Battlefront II launched in November.

Disney announced today at Casual Connect USA that it’s rethinking its mobile games strategy, including partnering with four big game publishers. It’s clear that Star Wars is a much-loved franchise with plenty of gaming potential, so it’s likely part of whatever plans Disney has moving forward. GamesBeat has reached out to Netmarble about whether or not the announcement will affect Force Arena in the future, and will update this article if we hear back.