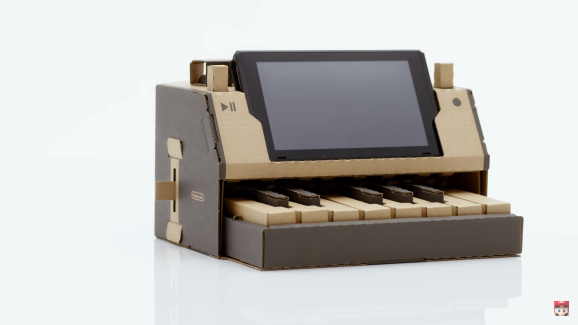 Nintendo revealed a new line of games for the Switch. Nintendo Labo has players creating special docks for the Switch and its Joy-Con controllers to make new experiences. Its first products, the Robot Kit and the Variety Kit, will come out on April 20.

In the reveal video, examples including creating a cardboard piano, a robot-like backpack, and a fishing pole. Nintendo Labo combines real-world crafting and game controllers and then uses the Switch to turn them into digital experiences. The Variety Kit will cost $70, while the Robot Kit will got for $80.

Get ready to make, play and discover on #NintendoSwitch! #NintendoLabo is a new line of interactive build-and-play experiences designed to inspire creative minds and playful hearts alike! pic.twitter.com/HgT3siMBxu

The Switch has been doing well with core gamers, but it hasn’t been as huge a hit with casual audiences as the Wii was. Nintendo Labo could make the Switch appealing to kids who aren’t into Zelda or Skyrim.

The Variety Pack gives you the tools to make your own cardboard piano, fishing pole, house, motor bike, and two RC cars. The Robot Kit gives you a backpack and headset. You can insert your Joy-Cons into the headset to allow for head-tracking.