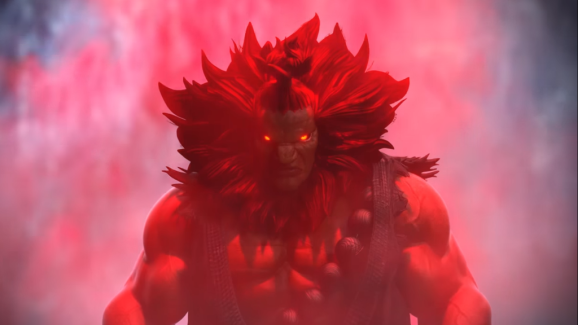 I’ve been thoroughly invested in Street Fighter V for the last two years. It’s my “main game.” The thing I play when I am done doing adult stuff, usually involving other games. It’s to the point where I run a local tournament dedicated to Street Fighter V every week.

It’s a lot of time to dedicate to a game. Enough to grow and reflect on how my perspective on how the fighter may have changed — especially my opinions on the original release.

As much as I praised the core game of Street Fighter V in my original review back in 2016, I have to now admit that Capcom shit-the-bed when it released it in the wrappings of a mediocre product. The failure of that version came down to one thing: features. Mostly, a lack of them. Specifically, it has no Arcade mode.

They say when you fail, fail forward. And today, that’s true of Capcom. Street Fighter V: Arcade Edition is an attempt to turn the things that weren’t so great about the original release into forward momentum. 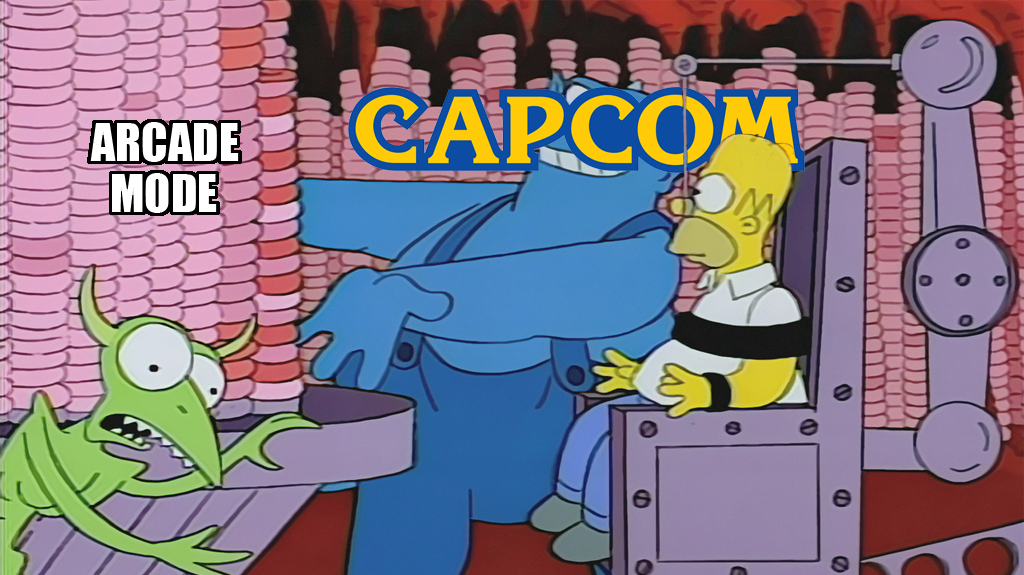 Well, have all the Arcade modes in the world!

Everyone was clamoring for an Arcade mode in Street Fighter V, yet it was conspicuously missing in the original release. At the time, I didn’t get that complaint. Surely, the core game was good enough. Right?

Time and perspective have shown me that I was wrong. A classic Arcade mode is vital for easing new players into the game. And the brutality and awkwardness of Survival mode in the original release wasn’t a good substitute.

Capcom obviously wanted to make this right. So much so, that they didn’t just give us one Arcade mode, but six! 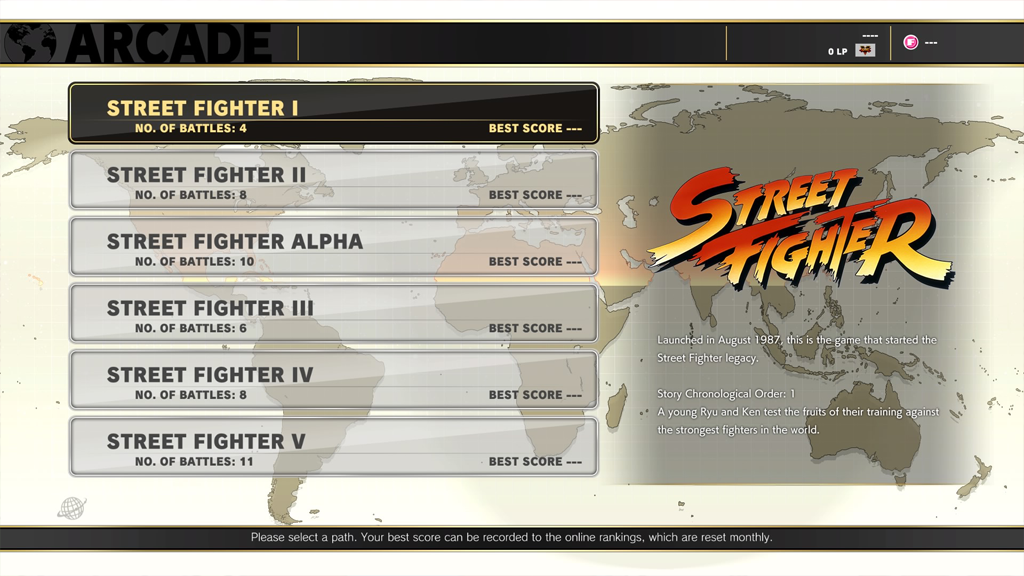 Each Arcade mode uses characters from the Street Fighter V cast that have appeared, in one way or another, in the games being represented. Defeating one of the Arcade modes gives a custom ending for the character being used, featuring a one-page art spread based off of the character’s original ending in said game.

This is a ton of content to play through for an Arcade mode. It’s almost overkill by good intentions on Capcom’s part, but who complains about receiving more content? Not me. Especially when this is obviously Capcom’s way of making good for not including an Arcade mode in the first place. Capcom slipped some small-but-significant tools inside of Street Fighter V: Arcade Edition that are incredibly useful. For example, if you run tournaments, you’re going to love the Team Battle settings that Capcom has added.

Team-based competition is a popular format in the fighting game community, where teams of three to five players fight each other Pokémon-style. When Capcom has tried to implement these sort of features before, they’ve come off as a bit disconnected from the needs of the community that inspired them. Team Battle in Street Fighter V, however, is highly customizable, with options that actually matter in a tournament environment. It’s not a gimmicky feature, and it could be used to ease running legitimate team format tournaments.

Training mode received two incredible frame-data based tools. Such as the frame gauge, which is a visual aide for showing how long a move is actually active.

Capcom also added a color-based safety setting, which assigns a color to both characters in the training mode based off of if they are “safe” while performing or blocking a move. If a character is blue, they are in a state of being safe, and they are unsafe if they are red. 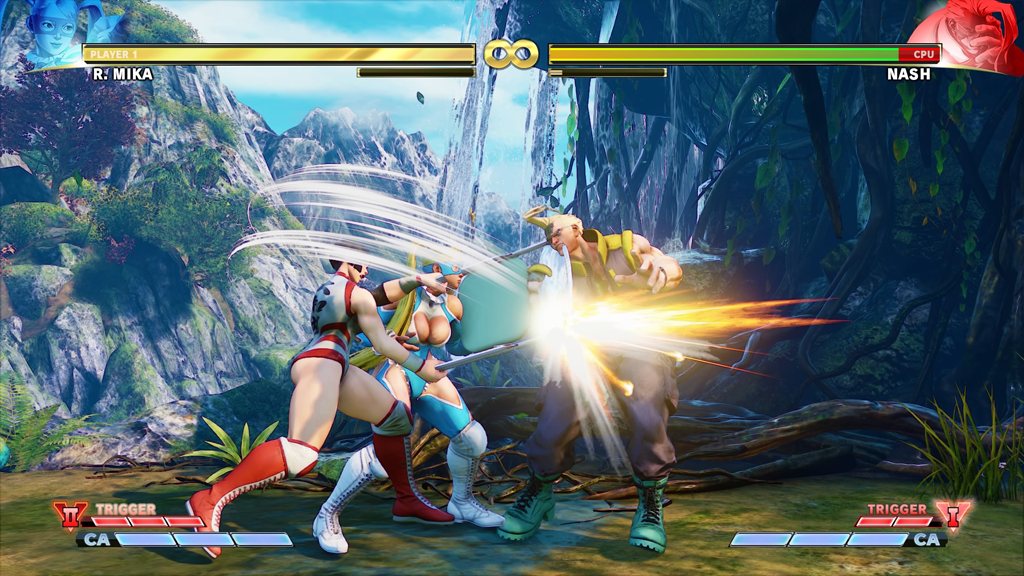 Above: No one ever suspects the steel chair …

The core game is still good

Everything I said about the core game in my original review of Street Fighter V in early 2016 is still very much on point when discussing Street Fighter V: Arcade Edition.

The gist is that Street Fighter V maintains a philosophy of fundamentals over gimmicks. While Street Fighter IV should be praised for ushering in an era of fighting games becoming an esports phenomenon, its many bugs and quirks created an environment of gimmicks over fundamentals.

For example, Street Fighter V uses the crush counter system, where a harder normal attack “crushes” an opponent putting out a weaker attack at the same time. This system is there to kill off the bad habit of Street Fighter IV players learning to spam Jabs (light punch) and Shorts (light kick) to get out of trouble.

Another example? Street Fighter IV style option selects and true ambiguous setups are squashed as much as possible in Street Fighter V. These elements in Street Fighter IV taught players that they shouldn’t commit to reads in key situations. That if they can’t have one option cover multiple set ups, then it’s the fault of the game and not the player. Above: You thought I was too close to fireball, but I threw one anyways.

Lies. What makes anyone a good fighting game player is conditioning your opponent and then making the appropriate reads, and Street Fighter V pushes its players full force to be conditioning and reading machines.

Think of it this way. A common situation in most Street Fighter titles is getting knocked down in the corner. My opponent can perform a “meaty” attack as my character gets up (having the move’s active hit frames activate just as my character is standing). They can also miss time the attack to bait me into doing my own strike. They can also walk up and throw, which beats a lot of my options for dealing with an opponent attacking my wake up. They can also walk up, fake throw to get me to perform a counter throw, but shimmy back as my counter throw comes out, and hit my character with an attack (which often leads to a crush counter).

This is the classic rock/paper/scissor of Street Fighter, and really, the genre as a whole. It’s a lot to consider in just fractions of a second. In a game where option selects are rampant, we could cheat the situation, and both myself and my opponent have two or three of those options covered with one input.

In Street Fighter V, you don’t get that insurance policy. It doesn’t want players relying on the training wheels of easy reprieves from these situations. My opponent has to make one offensive decision and stick with it. I have to make one defensive read and commit wholeheartedly to it.

The motto here is: Condition and read your opponent, or die. And I love it. 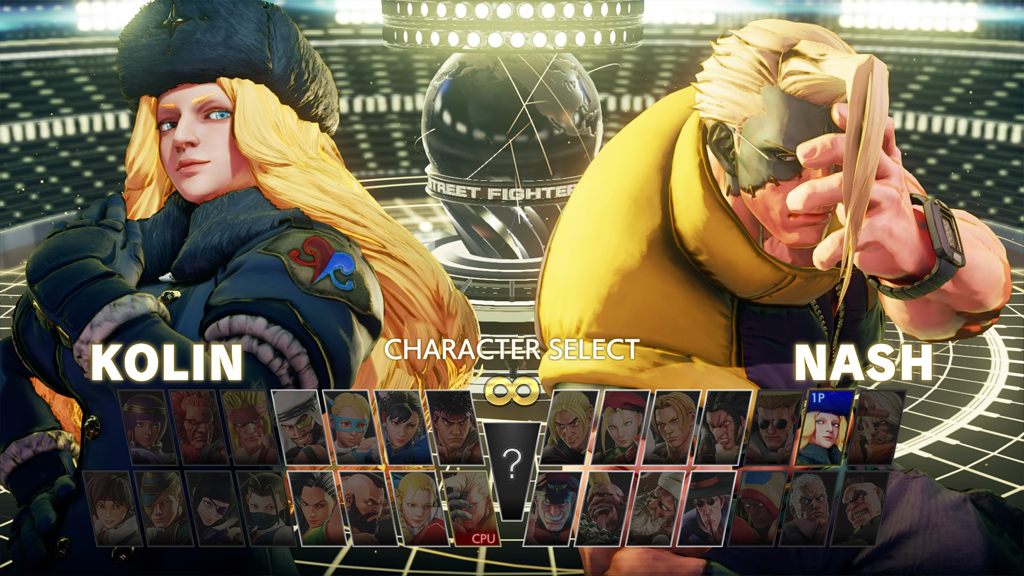 Most of the cast going in is well designed

To coin an old school cliché about closely balanced fighting games: Every character is viable.

The gap between the best and worst character is small compared to Street Fighter titles of the past. The really cool thing about this is that every fighter has maintained a unique play identity. If you want to rush-down and use frame traps, play M.Bison. If you want to turtle back and play footsies, try Birdie. If you want to threaten neutral and wrap up the round with a stylish combo, pick Urien. If you like going ham and forcing the opponent to read between command throws or anti-air set ups in the corner, choose Rainbow Mika.

Every character has a very specific play style they’ve been designed around, and all these play styles fit into the ecosystem snuggly without one overwhelming the cast entirely. When it comes to fighting games, that’s extremely rare, and Capcom has done a good job so far trying to keep those tier gaps as close as possible. 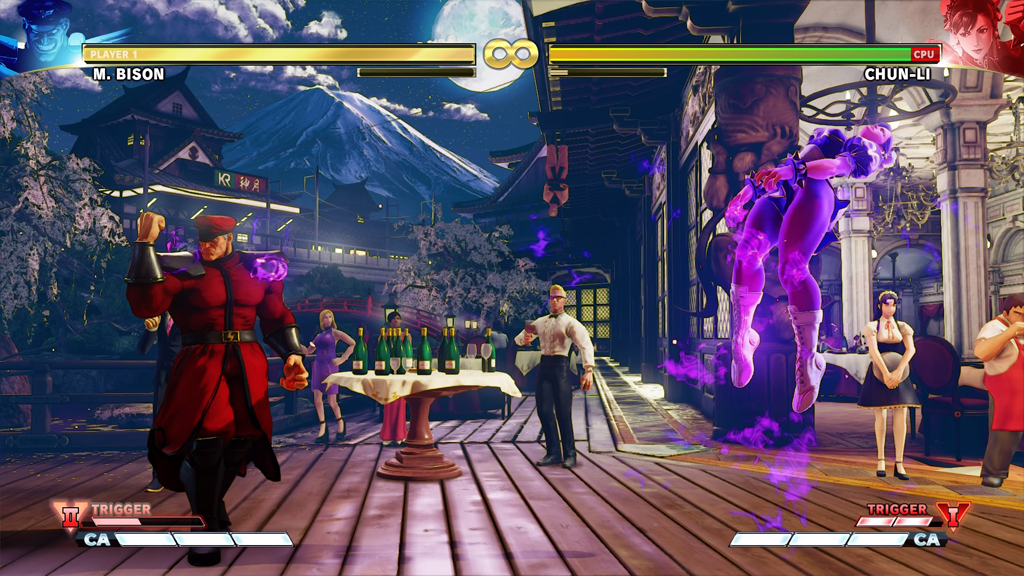 A design that can come off incredibly strict is the downside to how Capcom reestablished fundamentals and created an incredibly tight character tier list. Characters may have well-defined play-styles, but very few in the cast are allowed for much freedom or play expression outside of that mold.

The new secondary V-Triggers are an attempt to shake up match outcomes that, after two years, are becoming routine and a bit stale. For example, M.Bison’s original V-Trigger boosted his damage output, speed, and dash properties. It essentially super charged his already base frame-trap style of play.

M.Bison’s new V-Trigger 2 now trades those boosts for a command throw and his old psycho crusher move. This doesn’t radically change M.Bison overall, but when playing with M.Bison, it does make me consider how I want to play the fourth quarter of the round. When it comes down to closing out the round versus my opponent, do I want to start going crazy dashing around with V-Trigger 1? Or do I want to make my opponent sweat a possible command grab set up with V-Trigger 2?

These V-Triggers won’t necessarily change, however, the overall “Street Fighter V formula” — which is play your character in this specific way until you get V-Trigger and then pop V-Trigger to close the round. But they are new enough to make things interesting in the short-term, and having to make a strategic decision on how I want to try to end the round in certain match-ups is a fun element. And fun is what counts. 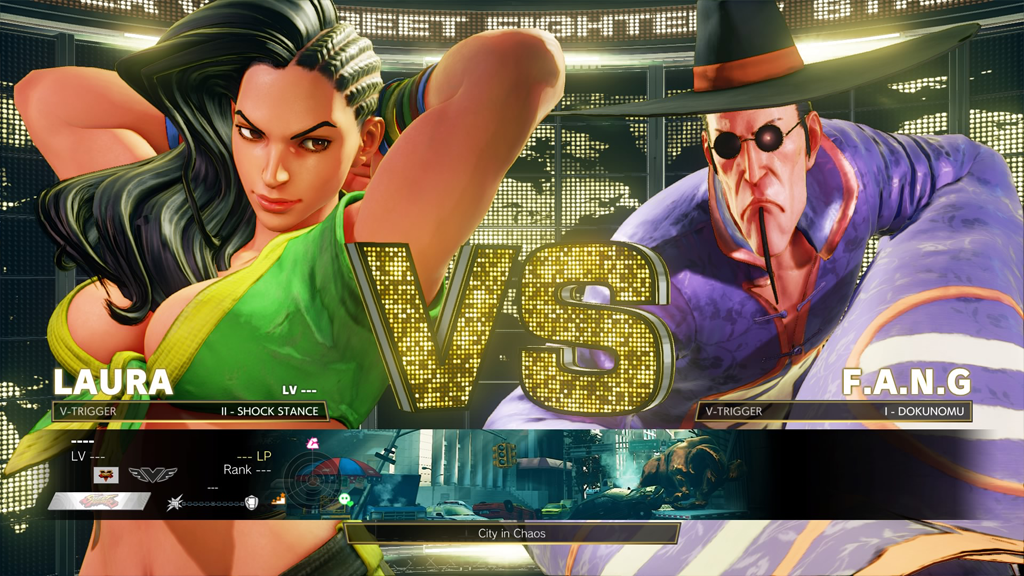 Above: “My arms are getting tired. We in the fight yet?”

The time from character select to match is too long

It is way too long. I feel like for every one match of Street Fighter V, I could have played at least two matches of any other Street Fighter title. A lot of that comes down to Street Fighter V being loaded with modern assets and the drawn out win/loss bells n’ hullabaloo.

First of all, the DLC in Street Fighter V is rarely priced to move, and there are a significant number of costumes that can not be earned with Street Fighter V’s in-game currency (Fight Money). Costume prices in real-world money have gotten a little better with the very few bundles that have been released, but they are coming out really late and sporadic. Often times they release under-the-radar.

Season passes are likely where longtime supporters of Street Fighter V are going to feel the biggest monetary slap from the Arcade Edition release. If you purchased the original game, Season One, and Season Two passes, then you’ve spent around $100 bucks for content that new comers are getting for $40 dollars. Not counting the Season Three pass we’re all going to be paying for.

As someone on the Internet is likely going to tell me, I should suck it up. This is the Season Pass business model of modern games, so what did I expect?

I don’t know, actually. I’m not even sure what the fix is here, but the current situation doesn’t seem so great, either. 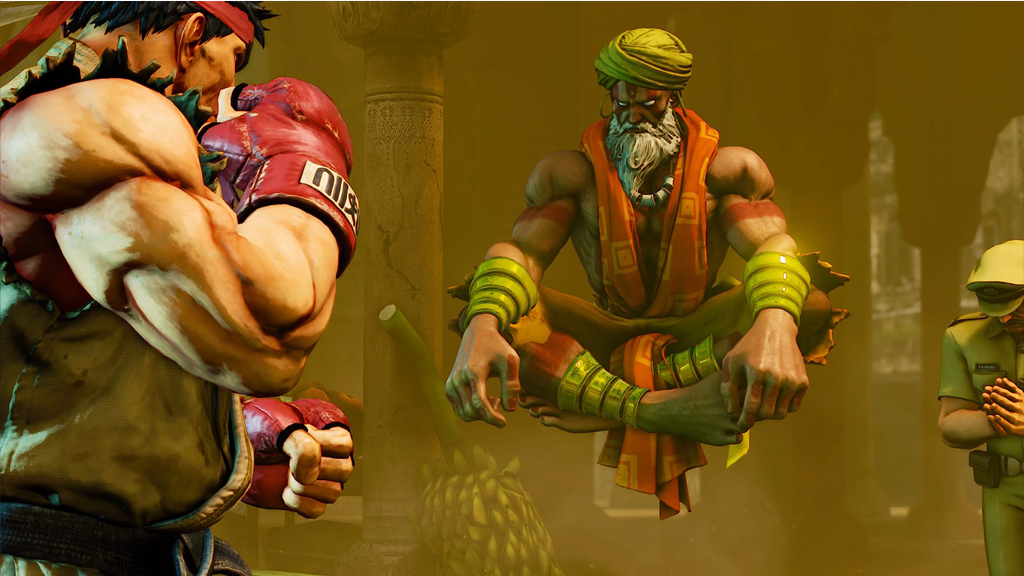 The core game of Street Fighter V started life off promising in its 2015 beta, and it has gotten better from its release in 2016 to its Arcade Edition version of today. I feel like Capcom knew what I didn’t appreciate about the foundation of Street Fighter IV’s design, and it moved away from those elements. It hasn’t been a perfectly smooth ride to get to this point, but it’s been better than the tweak n’ balance parades of Street Fighter titles from the past.

The consumer product known as Street Fighter V, however, farted out into existence with a lack of fundamental features. Features I admittedly shrugged off with my first impression, but I have come to realize with time and perspective that it really was a misguided release.

Street Fighter V Arcade Edition is available now for PlayStation 4 and Steam in North America and Japan, and January 19th for Europe. Capcom provided us with a copy of the game for review purposes.