David Ellison, son of Oracle founder and billionaire Larry Ellison, started his own Hollywood entertainment studio in 2010. Skydance has made feature films including Mission: Impossible — Rogue Nation, Terminator Genisys, World War Z, and Star Trek Into Darkness. Now, the company is branching out into games with Skydance Interactive, and virtual reality is its entry point.

Skydance acquired a studio, The Workshop, in 2016. The studio was making Pwnd, a cartoon-style first-person shooter that debuted in 2017. But the game was overshadowed by titles, such as Overwatch and PlayerUnknown’s Battlegrounds. Skydance Interactive has about 70 people, and now, they’re all focused on titles, such as Archangel — a mech-oriented VR title. I spoke with Chris Hewish, executive vice president for VR at Skydance Interactive, in a fireside chat at Casual Connect USA 2018 in Anaheim, California.

Hewish said the company is working on a VR version of The Walking Dead as well as another unannounced title. It is also going to update Archangel for multiplayer play. All of this, he said, is part of a plan for long-term success in a fledgling market. 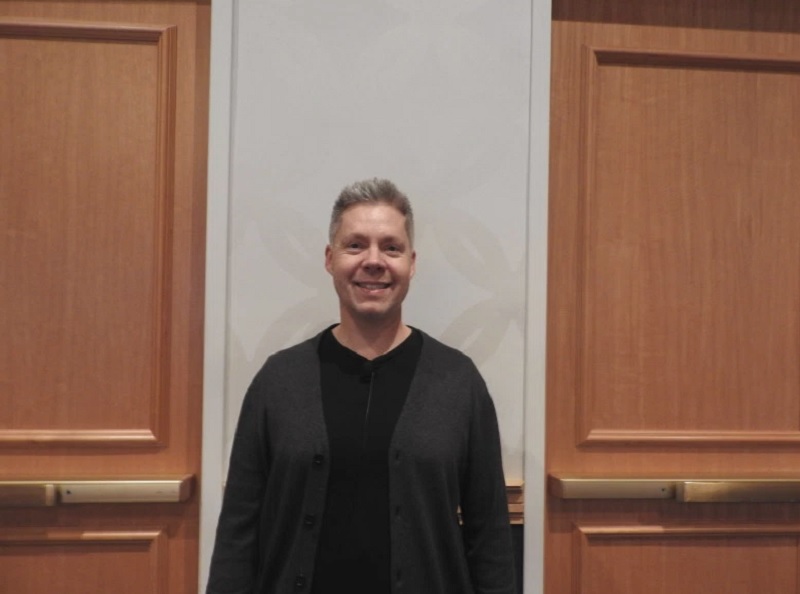 Above: Chris Hewish, executive vice president for VR at Skydance.

GamesBeat: Tell us more about yourself.

Chris Hewish: I’ve been in the games industry for about 25 years, through a lot of different cycles. I joined Skydance almost a year ago. I got into games right out of college. I was a gamer all my life as a kid, and I took a shot at joining the company whose games I loved the most, which was Games Workshop. Just a funny anecdote, when I sent my resume to them, I added a cover letter that I wrote in the voice of an Ork Warboss, a letter of recommendation from an Ork Warboss in their fiction. That opened the door and got me into the game industry. From there, I worked at Microprose, Activision, and Dreamworks Animation.

GamesBeat: What was interesting to you about VR? Why have you focused on it?

Hewish: After I was at Dreamworks Animation, I got into mobile a little bit, as a lot of people did. I did a little startup that didn’t work out, and I was looking at what my next move would be. It was either do more mobile gaming or a buddy of mine said, “You should check out this company called Survios. They’re doing some VR work.”

Like a lot of people, I hadn’t experienced VR in its current iteration. I was a little unsure. But I went over anyway and got an early demo of what would become Raw Data, full room-scale VR. I was blown away. I said, “I get it now. This is awesome.” That ability to get drawn into a whole new world, it embodied the fantasy of being a hero, seeing these new worlds and interacting with them in a direct way. It really hooked me and made me a believer.

GamesBeat: We all know that VR isn’t doing as well as expected. How does that affect what you’re thinking about now?

Hewish: Not to be contrarian, but I think VR is doing well. There were some big projections and hype about how it would come storming out the gate. When I say it’s doing well, I mean in the sense of, when you look at most new electronics for home entertainment, they follow a slow ramp-up in the initial few years. We’re seeing encouraging signs of that, where the adoption rate of VR is matching the curve of similar electronics that have come into the home. Certainly, if you look at the hype cycle, we’re in the trough of disillusionment right now, but….

GamesBeat: Is there a sign you see that this isn’t like 3D TV, which was truly faddish?

Hewish: A couple of things. We’re already seeing a second generation of hardware coming out, which indicates that the money behind it — the manufacturers behind it — see that there is value in iterating and evolving the hardware. We’re seeing a broad adoption of VR in location-based entertainment. What we’re still looking at right now is there’s in-home VR, and then, there’s location-based VR. Both of those, when combined, make a market. But I think the verdict is still out on which one becomes dominant or whether there’s room for both over the next three years.

GamesBeat: Skydance as well, tell us more about that. Generally, people may know that Skydance is run by David Ellison, son of Larry Ellison. His sister is running Annapurna in Hollywood. These are some interesting new players doing different kinds of things.

Hewish: Skydance Media is a film, TV, interactive, and animation content creator, a studio. We partner with Paramount and Netflix for distribution and some other top companies. Our goal is to make great worlds, great content, triple-A big tent-pole properties and worlds. We’ve done things like the last Star Trek, Mission Impossible, the Terminator reboot that will be coming out in 2019. On Netflix, we’re airing a show in a few weeks called Altered Carbon, which is based on a cyberpunk series of novels by [Richard] Morgan. Also Grace and Frankie, a popular show on Netflix. We have a wide range. Above: Archangel features mechs in VR.

GamesBeat: How did the gaming part get started?

Hewish: That started about a year and a half ago. David wanted to build an interactive unit, and he wanted to do it in a way that’s different from how interactive is treated at most studios — really wanted it to be its own stand-alone business, not just an ancillary consumer product group. He also saw that VR held a lot of promise for a company looking to break into the game space and establish themselves without having to go toe to toe with established players in console or mobile.

David acquired a company called The Workshop, and a few people that are speaking here like Peter Akemann. Really talented group of developers. They’re down in Marina del Rey. We’re up in Santa Monica. We acquired the studio with the goal of really shifting them to be a triple-A VR studio. I came on board eight months or so after the acquisition to help with those efforts.

GamesBeat: And the first game was Pwnd?

Hewish: We actually launched two games at the same time. One was Pwnd, which is a league-based shooter, a multiplayer game. It’s non-VR. The other one is Archangel, which is a big mech VR title, living out that fantasy of piloting a big robot and destroying things.

GamesBeat: Pwnd didn’t do as well as you guys had hoped. It was their passion project, and they wanted to get it out, but….

Hewish: It’s a solid game. We encountered, as a lot of people have, the fact that the team-shooter market is pretty dominated by Overwatch and then PUBG coming out. We did want to respect the creators at The Workshop, and the project they’d been working on for a number of years. That’s a theme throughout Skydance. We really do respect the talent, and we want to try to help them bring their visions to market. We stayed with Pwnd, brought it to market. We’ve been supporting it for six months now. We’ll see if that can gain traction. Even though VR is our focus, we’d be happy to have something else that took off and would also be a good line of business. Unfortunately, it didn’t.

GamesBeat: And now you’re going to double down on VR?

Hewish: We are. We’re focused purely on VR now, at least within our interactive studio. From a broader perspective, when you look at the interactive division at Skydance, we’re also looking at co-development and licensing deals to get our content onto other platforms, but we’re doing VR in-house. We’re working on Walking Dead and an unannounced title that will be coming out in 2019, as well as more content for Archangel. 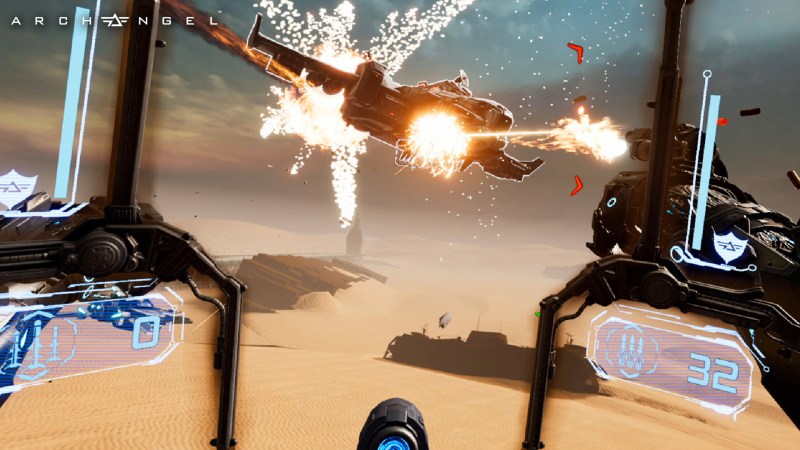 Above: The game takes place in a post-apocalyptic version of America.

GamesBeat: Tell us more about Archangel.

Hewish: That was the big mech combat game that came out on the three premium headsets — Vive, Rift, and PSVR. The game’s been doing well for us. I’m a big believer in trying to build a community and supporting our games after we launch them, as opposed to just a packaged-goods model. We’re working on additional content for Archangel. We’re doing multiplayer mech-on-mech combat. That’ll be coming out in the middle of this year.

If you’ve played the single-player game, it’s an on-rails shooter with a narrative and all that good stuff. But with the player-versus-player combat, we’re going off the rails and really embodying that fantasy. You’re piloting this giant mech. We have locomotion and torso twisting and the fun combat that goes along with that. We’re adding new classes of mechs into the mix.

GamesBeat: Your first two titles weren’t based on any of Skydance’s movie IP. Why was that?

Hewish: We’re gluttons for punishment [laughs]? Actually, that was by design. As I mentioned, we really are treating this as its own stand-alone business unit, not just an ancillary to the film or TV business. Because of that, it was important that our first games out were original IP. If we had come out with one of our film properties, our streaming properties, it would have set the tone that we’re just the child of that parent company, just relying on their IP.

Our mandate is to do what’s right for the interactive business, and if that means we work with some of our own IP, great. If it means licensing IP inbound, like with the Walking Dead, great. If it’s original, also great.

GamesBeat: Is there a broader, longer-term strategy around VR?

Hewish: We really look at the next couple of years as an opportunity to establish ourselves as a triple-A player in the VR space, establish ourselves as one of the leaders, if not the leader, in VR. We believe that the market will pop in a few years. Once we have additional hardware cycles, prices come down, and friction is removed from the whole process of setting it up and everything. We want to be there when the market takes off. That’s how we believe we can position ourselves as a new interactive company.