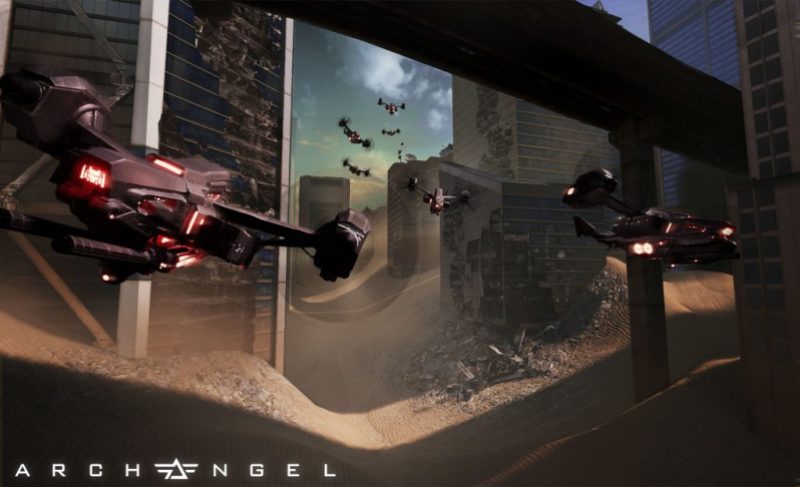 Above: Archangel lets you play in a giant mech in VR.

GamesBeat: Do you feel like you have to be active now in order to be prepared later?

Hewish: Absolutely. We’re kind of treating it like a startup mentality, where we have to be active now, develop our tech stack, get that in a really good place to have a competitive advantage. When the market does mature, we’ll see big players starting to move in, as the P&L start to make sense. One way to compete against that is to have amazing technology expertise and understanding. The kind of things you can’t just buy but that you have to develop over time.

GamesBeat: This is a team of 70 or so people?

Hewish: Yeah, the studio is close to 70. We have more than 50 developers, plus IT and support staff and all of that.

GamesBeat: That’s enough for two major projects at a time?

Hewish: Two and a half because we’re still doing content with Archangel. We restructured recently to focus on smaller core teams — the Walking Dead team, the unannounced title, and Archangel are smaller core teams, about 10-12 people, and then, we have a centralized resource pool that includes centralized tech. And then, also people that you don’t necessarily need full time on a project. Instead of double staffing, we’ve centralized all of that. It’s allowing us to be responsible with our costs and still build everything up.

GamesBeat: Looking at the other studios in Hollywood, how would you summarize Hollywood’s view of VR and the opportunity there?

Hewish: There are certainly some believers out there. It’s similar to what happened with mobile, when that initially came out. Is this an opportunity to generate reach for our IP, or is this an opportunity to generate revenue? Sometimes, those are different approaches to the business. Is it a marketing, promotional play, or is it a revenue center?

With VR, we’re seen some things. Disney are obviously big believers, with what they’re doing with The Void. Paramount is our partner on the film side. They definitely seem to believe in it. I think people in Hollywood are viewing it more as an opportunity to create great content and, hopefully, to get the revenue down the line. Whether it’s filmmakers coming in who want to tell stories in VR or the interactive side with gaming.

GamesBeat: Lionsgate seems very active, but they’re doing a different strategy of working with outside developers. For you guys, is that going to be part of the mix?

Hewish: Like I said, with the overall interactive division, we have our internal studio. That’ll be our crown jewel. We’ll look at that as developing some great in-house tech. But absolutely, we plan on working with other developers externally. We’re talking with a number of people right now, whether that’s VR or console or mobile. 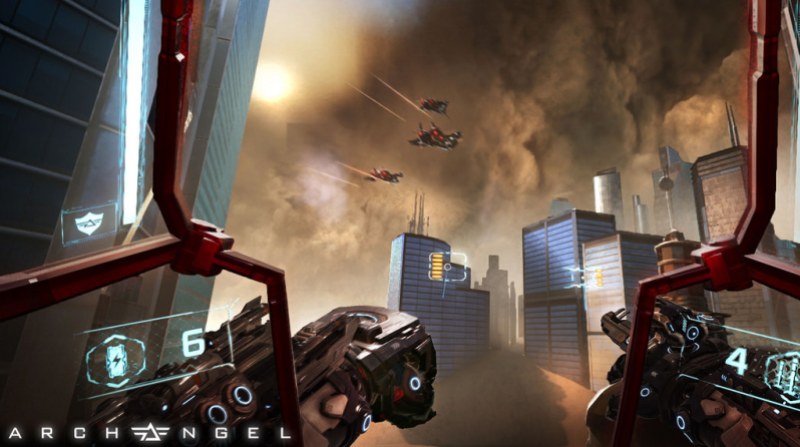 Above: In Archangel, you control a giant mech that’s armed with high-tech weaponry.

GamesBeat: What’s your view of what’s worked in VR so far?

Hewish: I think the two things that have worked so far are social play — you look at Rec Room and the success they’re having — social play is a big part of VR. It can help drive adoption. Word of mouth is still the best vehicle for marketing in VR, so if you have something that has social play to it, it affords the opportunity for the guy who has the VR headset to tell their friends and hopefully get that on board. Triple-A content, I think — unfortunately there’s a lot of short experiences or things that don’t fulfill the promise of the cost of VR. They’re fun to try out, but they don’t justify plunking down the money for a VR rig. Seeing more high-quality games that have actual depth and reply value come out — the ones that have done that have seen success.

GamesBeat: What are some interesting technologies that you think are going to come into VR over time? I went to CES and saw another eye-tracking demo. I saw a lot of haptics, touch-feedback systems for VR. There are these second-generation headsets coming along. Over time, what are you more bullish on?

Hewish: There’s two parts to that. First, there’s the hardware side. What are we going to see on the haptics front? There’s a lot of neat stuff happening out there, but until it becomes a universal piece of the hardware, it’s tough to validate putting a lot of resources into something and working with it. But it holds huge promise. The biometric front alone, being able to track how the player is physically responding to what they’re doing and adjust the game accordingly, that opens up a whole new realm of opportunity that can only be done with VR.

Personally, I’m excited to see some of how characters, living characters, living worlds can evolve in VR, the technology for that. Bringing in some of the work that’s being done with AI, whether it’s the medical field or the robotics field — I think the previous speaker actually talked about this, creating worlds that respond and adapt to the player and evolve, so you don’t have to do a lot of heavy scripting to have a story. The game evolves with you. Those are the two pieces that I’m excited to see.

GamesBeat: Are you more excited about, say, VR slimming down and becoming wireless and stand-alone and less expensive, or do you also want to see the high end of VR get closer to the holodeck — or something like that?

Hewish: A holodeck would be awesome. But it’s really interesting. We’re seeing things like Santa Cruz from Oculus on the horizon that bridge the gap between mobile VR and premium VR. I’m definitely into the premium VR side of things. That’s the kind of content I like to create. I’m excited to see that kind of hardware lose the cameras, go inside out, untethered — this is all years down the road, when we have processing power equivalent to a PC in the headset. All of that is very exciting.

It does raise a lot of design challenges. At least with the cameras, you can get a sense of boundaries for the player. With inside-out tracking you really need — if the player can walk anywhere in VR, obviously, you can map a room, but what kind of games can you make that encourage a little bit of movement but that take into account the variety of spaces people can play in? 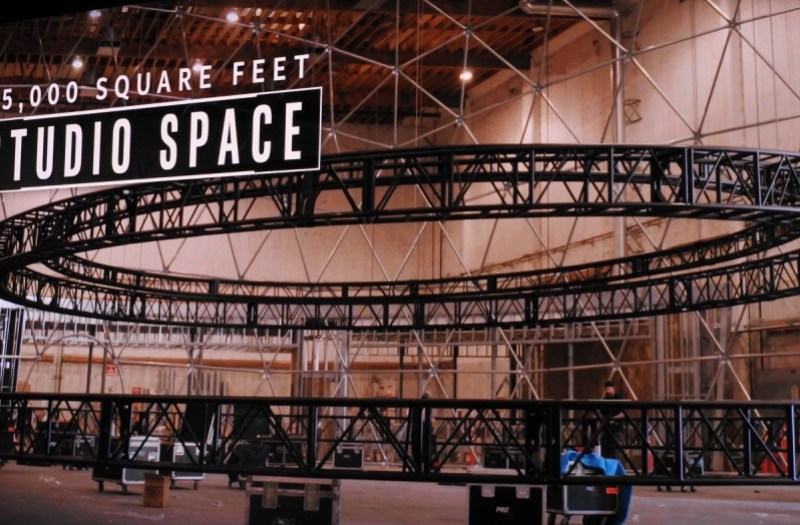 GamesBeat: Intel had an interesting announcement last week with Intel Studios. They’re going to set up a big 25,000-square-foot studio in Hollywood. They’re partnered with Paramount, but basically, they’re inviting Hollywood to come in and learn how to make immersive media. Not just for VR but for things like interactive sports viewing. How do you interpret that?

Hewish: To me, that’s another indicator that this market is heading in a promising direction. To see somebody like Intel investing on that level in highly immersive content, whether it’s VR or sports, it’s really encouraging. I think it also highlights the reality that we’re still in a phase of finding out what does and doesn’t work in VR — what kind of content, other than games and movies, is in the bullseye. What kind of content can VR unlock, what new ways to experience things?

GamesBeat: The Walking Dead has had some very successful mobile games and the successful Telltale series. What do you think VR should deliver for fans of Walking Dead that’s going to be different?

Hewish: The Walking Dead VR game needs to deliver something that, first of all, you can’t find on any other platform. Second, it really needs to put you in that world. It’s one thing to watch a show or interact on a 2D screen. Click a button to put zombie guts on yourself and blend in, but it’s a whole different thing if you have to actually do that in VR yourself, pull those guts out of a corpse. Not to be too dark. But that kind of experience you can only get in VR, where you’re not watching it or directing it. You’re living it. That’s really our goal.

It’s not just lip service. We have an internal greenlight process. We had our Walking Dead game go through its initial proof-of-concept phase. We looked at it, and there was some good stuff there, but we’re true to ourselves. We said, “This is cool, but we can see this on other platforms. Somebody could do this on other platforms, whether it’s mobile or console or PC.” We set the team back to the proof-of-concept phase.

That’s one of the things I mean when I say this isn’t a traditional Hollywood studio. It’s not just, “Here’s the design. Go and do it.” We’re looking at whether this is something that moves VR, that only can be done in VR, and is true to the brand.

Above: The Walking Dead comic book.

Audience: For me, what works in VR is the immersion of it, the ability to move around a space, move your hands, all that sort of thing. That’s part of the problem to me. I see two big problems with VR: one is price and the other is tethering. There’s a dead zone behind you.

Hewish: Absolutely. That really highlights the promise of room scale, really being in it. And it highlights one of the design challenges in VR. If you’re making a room scale game and you’re spawning things behind the player, really requiring the player to be 360 in how they’re interacting with the game. That’s great on a room-scale headset, but how do you bring that to something like PSVR? You can do it, but it means you may have to do some redesign or take something into account with the control scheme.

To me, it’s really interesting that there are all of these new challenges in developing for VR, which is also part of what drew me to it. The whole language of design and business is new.

GamesBeat: Are you looking to design things that would go into VR arcades? Is that a good stepping stone for the VR market?

Hewish: Absolutely. I think VR arcades, location-based attractions — there’s a couple of subsets within that category. That’s a very strong piece of the business or could grow into one, and it’s a great way to introduce people to VR. The reality is, as you said, the friction points and the price points. It’s a barrier. Any way we can expose the general public to VR is awesome.

Coming back to the social piece of it, when you’re designing location-based entertainment, having it be multiplayer, whether it’s cooperative or PvP, it really leans into that social element of VR. It always cracks me up. You hear people who haven’t really tried VR talk about how un-social it is, how you put it on and you’re locked away from everyone else in the world. But if you’ve actually tried VR that has social play in it, it’s amazing. You’re really connected with other people. That’s a promise you can double down on with location-based.

GamesBeat: AR is getting a lot of excitement now. Are you also interested in that?

Hewish: That’s on our strategy for this year, to identify what our approach to AR is going to be. Is that something we’ll do internally, or will we find a great partner to team up with? It will probably be the latter, but this is the year where we figure out what our approach and strategy to it is.