Before I went to Disneyland this week, I made it to what is a far more interesting attraction for Star Wars geeks. In the Downtown Disney retail area, I went to The Void and awaited my turn at the Star Wars: Secrets of the Empire virtual reality experience.

The location is one of just three in the world — others are in Orlando, Florida, and London  — that deliver a high-end VR experience. Utah-based The Void, which made the Ghostbusters: Dimension VR experience at Madame Tussauds in New York, teamed up with the Disney-owned ILMxLAB to create the attraction.

This kind of experience represents the future of VR, which isn’t taking off in homes so well but has great promise as location-based entertainment.

Editor’s note: This story has some spoilers about the experience. 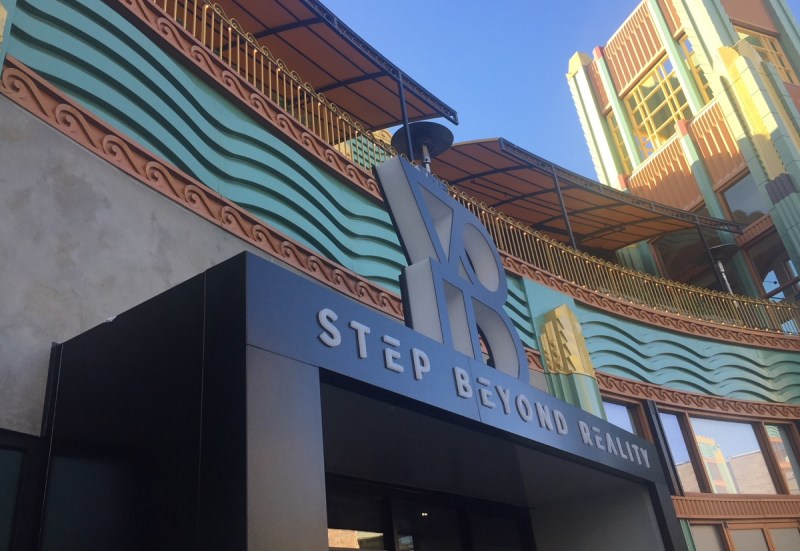 Above: The Void: Step Beyond Reality at Downtown Disney in Anaheim, California.

I had to sign up in advance to pay for the $30 experience, which takes people in groups of four. A worker told me they were getting about 300 people a day through the experience, and it was pretty much sold out so far.

I wasn’t allowed to take pictures inside the experience. After all, we were on a short 30-minute schedule. Once you sign in, a greeter asks you to use the Force to open the door to the attraction. When you walk in, more greeters in black outfits help you get into your VR rig. The rigs have a backpack with a laptop in them, with wires connecting to an Oculus headset. But in contrast to the Oculus Rift home consumer VR kits, this setup had no hand controllers. No wires. No controllers. That was pretty liberating. 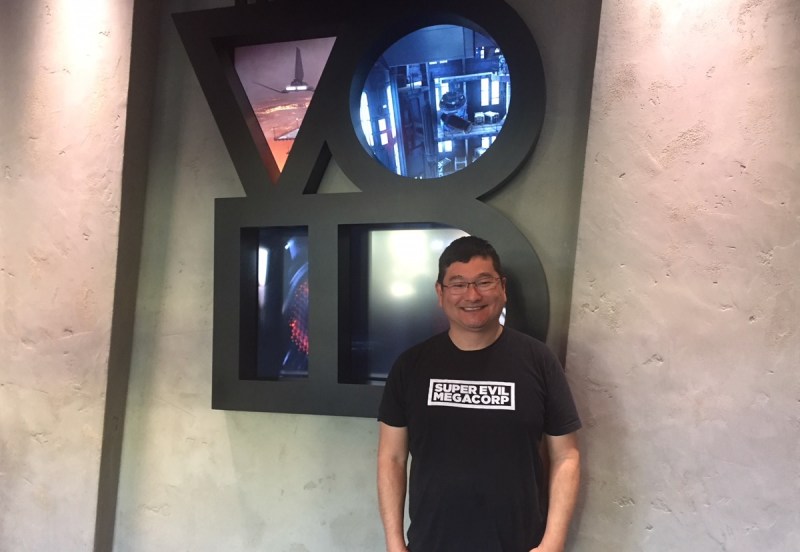 Above: I was pretty excited after waiting in line (even though I had a reservation) at Star Wars: Secrets of the Empire.

You strap yourself into the backpack and the greeters help you put on the headset. (You have to be at least 10 years old and 48 inches tall). They twist it tight, and you’re ready to go. My group had three people, and once we were ready, they showed us a video, which was our first step into the immersive story.

They asked me to look down at my hands, and at first, I saw nothing. Then, after a little delay, my virtual hands appeared. As I moved my real hands around, the virtual hands mimicked the movement inside my VR screen. The tracking was a bit off, with considerable latency. But it worked.

The video screen started out with the typical, “A long time ago, in a galaxy far, far away.” The tale takes place between Star Wars Episode III: Revenge of the Sith and Star Wars Episode IV: A New Hope. You get a video message from Cassian Andor (played by actor Diego Luna) from Rogue One: A Star Wars Story. He asks you to complete an undercover mission for the Resistance. We had to go fetch some important object and make off with it. I looked at my fellow participants, and we were all decked out as Imperial stormtroopers.

We boarded a ship that K-2SO (played by Alan Tudyk) headed, and we set off for the molten planet of Mustafar, the home of Darth Vader. Fortunately, we were sitting on a bench while we were flying through space and landing. 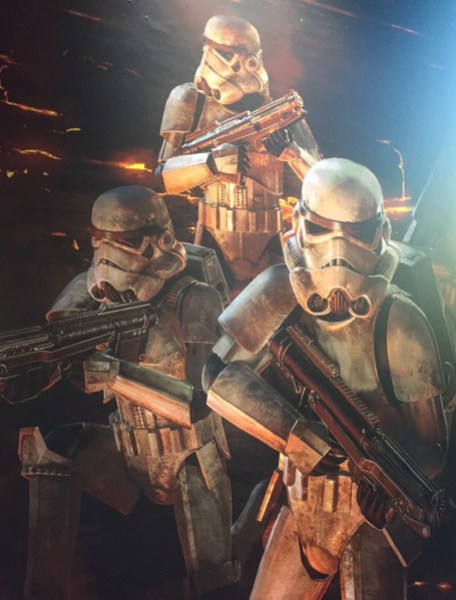 Above: Star Wars: Secrets of the Empire is a $30 VR experience.

As we landed, we had to physically get up to go through a door. This was a little easier said than done. I didn’t want to bump into anything. So, I reached out to grab a virtual wall and found it was a real wall. That helped give me confidence to move around freely, so long as I avoided the other two people in the experience with me. It was a very tight and confined space, even though we had the freedom to move around because we weren’t tethered.

We walked through the door and found ourselves inside an Imperial facility, trying to stay stealthy. We picked up some blasters, which were wooden guns with a trigger in real life. We were supposed to infiltrate the base, but for some reason, one of my colleagues just opened fire. That was the end of our stealth play, and we had to start shooting at stormtroopers.

The gun was a big block in my hand with a trigger, and in VR, I could see it firing as I pulled it. The blaster was nice, making a loud sound as I fired at the stormtroopers, but the aiming wasn’t really easy. I usually missed on my first shot and had to adjust fire slightly to hit the hostiles. The blasters had a bit of a delay, so I couldn’t shoot at a rapid clip. But when I hit the enemies a couple of times, they went down.

As I was doing so, I felt like the 3D graphics were merely adequate. Every now and then, my colleague’s leg would flicker out of place and snap back into position. So, the bodies weren’t always doing exactly what I thought they should be doing.

I found that I was getting fired at from multiple directions, so I had turn my head and face the enemies. I found that my screen was turning slightly red, which meant I was getting shot, and a droid was telling me I should do something about that. I had to keep turning my head to find enemies who were popping out of various platforms in front of the lava beds. This was surprising as I figured the stormtroopers would be terrible marksmen.

Once we took out the stormtroopers, we had to deal with some very big lava monsters. (I learned later that the lava was supposed to make us feel hot in the confined space where we were fighting, but I didn’t actually feel it. I thought I was simply getting a bit overheated from the gunplay.)

At some point, we had to listen to a Simon-like series of tones and repeat them in order to open or close a door as needed. We were riding up and down in a virtual elevator and shooting at enemies. This Simon-like task became so laborious that it tied down one of our crew. 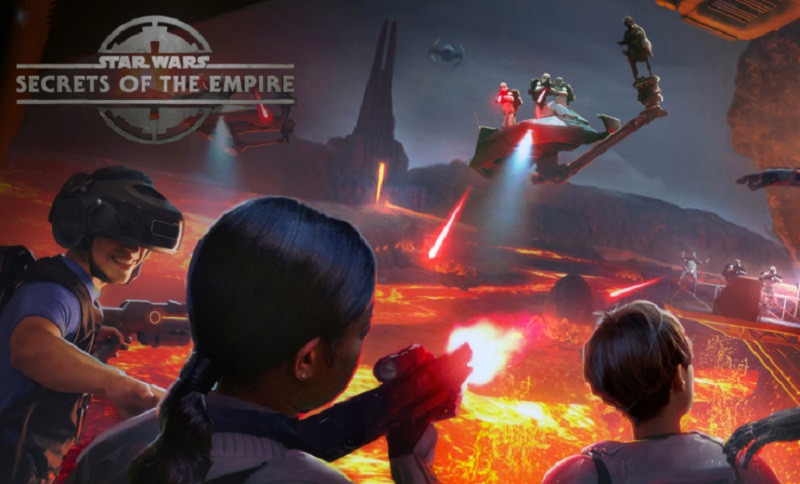 Above: The Void is making Star Wars: Secrets of the Empire as a VR experience.

(The adventure contains an Easter egg, but I won’t spoil that for you if you haven’t gone through it yet.)

The experience builds to a crescendo of action, and you hear the signature heavy breathing of everybody’s favorite enemy. We tried to shoot Darth Vader, of course, but he used the Dark Side of the Force against us. Fortunately, K-2SO had our backs and came to the rescue.

After it was done, we walked back to the room with the rigs and unstrapped ourselves. We had a chance to buy a $15 picture in both physical and digital form, and then, we walked out. I wish I could say the graphics were really impressive, but that just wasn’t the case.

Above: Star Wars: Secrets of the Empire is a VR experience for the galaxy far, far away.

Image Credit: From the Void

No leaderboard was available. I guess the point isn’t to score the most kills. It’s really about having fun in an immersive Star Wars experience.

And while it fails in delivering a technologically impressive next-generation VR experience, it is a good time — or as fun as many of the aging rides at Disneyland. It’s not what I would call the Space Mountain of VR experiences, but it takes a step in the right direction.

Is it worth the $30? That’s for you to decide, young Padawan.