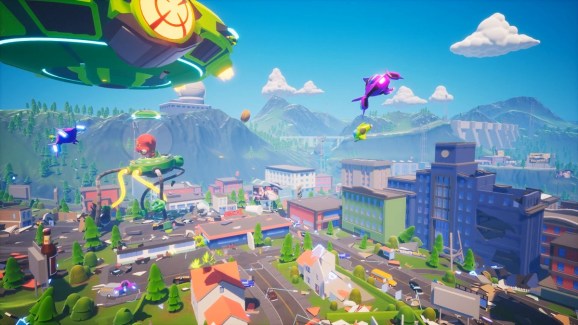 They Came From Space was built with Cloudgine.

Epic is unlocking the power of the cloud for its Unreal Engine 4 game-development tools. The company has acquired Cloudgine, a startup that enables Unreal Engine 4 to run certain game computations in the cloud, for an undisclosed amount.

Cloudgine’s tech uses cloud servers to enable console, PC, and virtual reality games to render content and interactive objects without worrying about the platform. This is a concept that has shown up in a handful of games, like Titanfall and Forza Motorsport 7. In those online shooters and racing games, the developers offload artificial intelligence routines to the cloud.

But cloud computing is capable of a lot more than sending swarms of enemies at you. For example, Cloudgine was working with Microsoft on its upcoming Crackdown 3 open-world crime game. In Crackdown 3’s online mode, players can destroy massive structures. To ensure the Xbox One can handle all of that action, Microsoft is running the calculations for that destruction in the cloud.

“Since its inception, Cloudgine’s research and development has been based on Epic’s Unreal Engine 4,” Epic marketing boss Dana Cowley said. “Cloudgine’s cloud computing and online technologies will enhance the UE4 feature set to help developers push the creative and technical limits of games, film, animation and visualization through advances in physics simulation and networking.”

You can see an example of Crackdown 3 running on Cloudgine’s tech in the video below:

Microsoft said that Crackdown 3 development will continue unaffected by this acquisition.

Here’s a statement from a Microsoft spokesperson:

“We are excited to see gaming experiences get better with cloud-computing becoming part of UE4. Also, a sincere thanks for both studios’ work done in partnership with MS Studios to build the cloud-powered technology in “Crackdown 3” from scratch.”

“Work continues on Crackdown 3 and is not impacted by this news. We look forward to sharing more on “Crackdown3” and having fans get their hands on the game when it launches later this year.”

This deal does mean that Epic will integrate cloud computing options into its Unreal Engine. This will enable the studios that use this tool to unlock new A.I. and physics options in their projects. This is especially useful as more publishers and developers embrace service games that require an online connection to a remote server.

Cloudgine also represents the technologies that enable developers to do more with older hardware. That is important as the aging Xbox One and PlayStation 4 systems continue to sell well alongside the less powerful Nintendo Switch and affordable video cards. Cloud computing can deliver equivalent gameplay experiences across all those platforms even if games are still rendering most visuals on the local processors.