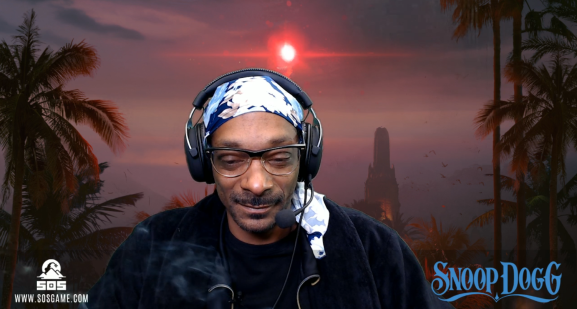 A picture in which Snoop Dogg is high.

The celebrity endorsement is an age-old marketing trick, and it’s one that game developers still use even in an era of social-media influencers. Developer Outpost Games just worked with beloved West Coast rapper Snoop Dogg on a Twitch stream where the dogg father played the game for a audience of thousands.

And yes, he did smoke weed.

SOS is a battle royale survival game where teams of players must outlast their opponents on an island. It is similar to PlayerUnknown’s Battlegrounds, but it is on a smaller scale with only 16 players. It also has a game-show conceit and a relic that players must try to find before they can win. So you cannot simply murder the competition. Three players, not one, can win. And its Hero platform enables those watching to cheer on the competitors, encouraging players to play as characters, not just mindless killers. Viewers can even reward players.

Outpost launched SOS on Steam’s Early Access program for unfinished games. You can get it for $30 — although it also has a $60 and $100 versions as well.

Snoop, who plays a lot of games in his free time, livestreamed the game on his own Twitch channel. He played for about an hour, and he attracted nearly 80,000 concurrent viewers at one point.

You can catch the video of the broadcast right here:

We’ll see if the Snoop Dogg factor helps SOS. I was going to play it anyway, but I’ll probably load it up even quicker now that I’ve seen Mr. Dogg trying it first. But this strategy is something that we are seeing from a lot of developers even if it doesn’t always involved one of the world’s most well-known musicians.

Another example of hitting Twitch hard earlier with a new game is Fortnite. Epic’s team did an astounding job of working with Amazon’s video platform and many of its biggest influencers to ensure that Fortnite’s PUBG-like Battle Royale mode was always on the front page through its first couple of weeks. That exposed massive audiences to Fortnite during the height of the PUBG phenomenon, and now Fortnite has turned into a phenomenon of its own.