Plexchat has launched its Path2Pro esports league for Supercell’s popular Clash Royale mobile game. The effort is part of an attempt to establish mobile games as a thriving part of the esports business, which Newzoo predicts will hit $2.5 billion by 2020. It’s also a recognition that amateur players need a better path to becoming professional esports athletes in the competitive Clash Royale rankings.

So Redwood City, California-based Plexchat has decided to provide the ecosystem and establish partnerships to make an independent esports league work. Plexchat is creating the Path2Pro league on its own, without explicit permission from Helsinki-based Supercell, but it has kept Supercell informed of its plans, said Plexchat CEO Shawn Foust in an interview with GamesBeat.

Registration is open now until January 28 at the official website. The bracket concludes on Feb 25, and those players will be eligible for the tryouts among the teams which will continue on.

Plexchat is a chat platform for mobile gamers, and it’s forming the league with three of the top mobile esports Clash Royale teams: Team Queso, Tribe Gaming, and Nova esports. And it is tapping the Clash Royale statistics expertise of Stats Royale, another independent company, for more analytics and rankings for the league.

“We are doing this independently,” Foust said. “There’s a question of how esports should be organized in mobile. We want to take esports seriously. There is a gap from someone starting out Clash Royale to someone who is serious about climbing up the ranks. This is for those with the aspirations to go pro. I also so a chance for the community to act proactively and to gather official status over time. We will make our league data open and transparent to Supercell.” 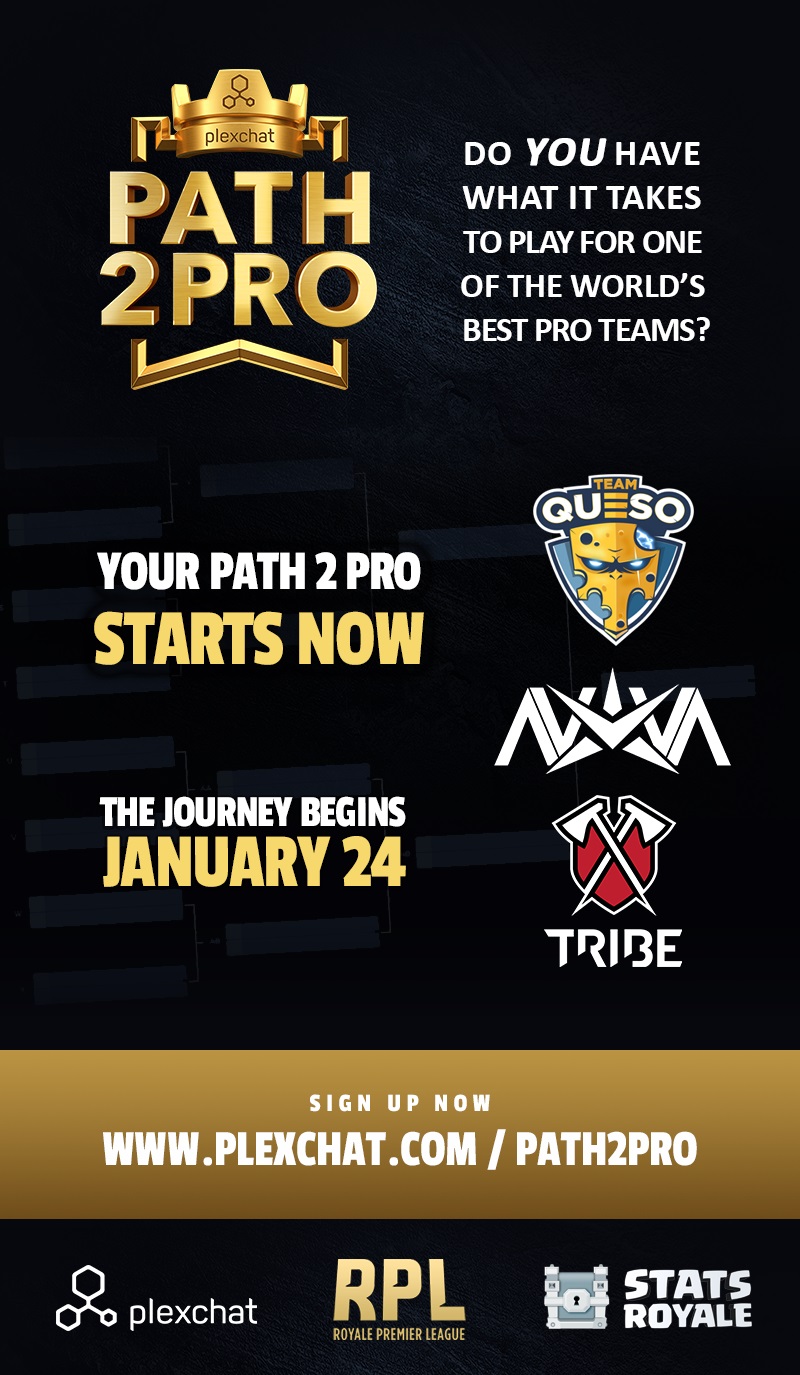 Above: Plexchat wants to find the path to going pro for Clash Royale fans.

Foust got the idea for the league after he checked out Supercell’s own global tournament to find the best Clash Royale player. He felt there needed to be something to bridge the beginners and the pros. Over 28 million people played in the official Crown Championship World tournament. More than 150 million battles were played, and 225 million towers were destroyed.

Every participant will have a chance at an official tryout for Team Queso, Tribe Gaming and Nova.

“2018 is going to be a ground-breaking year for mobile esports — specifically for Clash Royale. We’re excited to be part of Path2Pro, and hopeful that we’ll discover hungry, dedicated, and talented players to recruit to Tribe.” said Tribe Gaming CEO Patrick “Chief Pat” Carney in a statement. 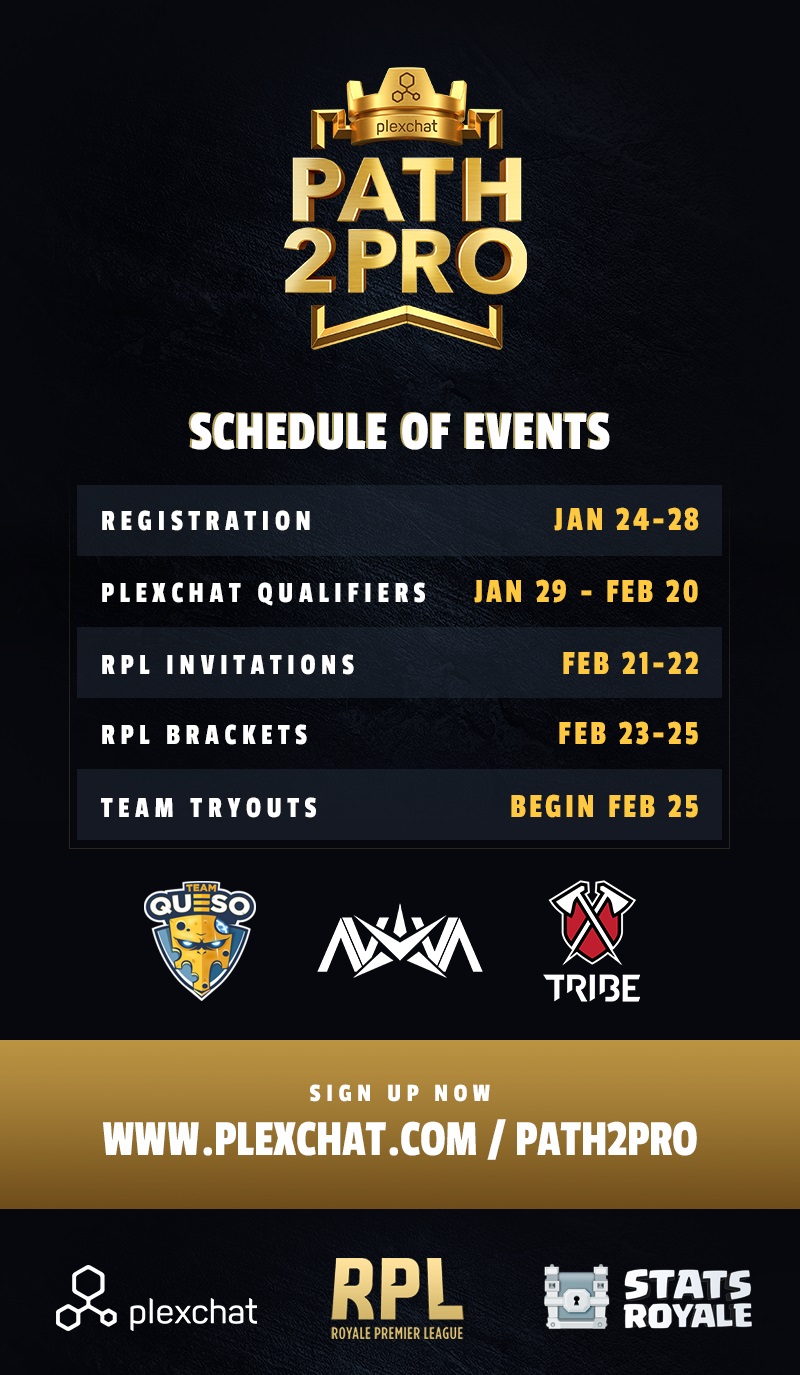 Above: Plexchat will make it easier to find the best players in Clash Royale.

The teams are looking to find talented players wherever they might be.

Nova director of dontent Tim “CWA Mobile Gaming” Evans added, “I believe we could be in the early stages of creating the standard by which all Clash Royale pro teams recruit undiscovered talent. Players that are able to list accomplishments such as ‘Path2Pro Champion’ on their competitive resumes will be very attractive to Nova.”

Plexchat, which has 20 employees, has also teamed up with another logistical partner, The Royale Premiere League (RPL), which will manage and administrate the championship round of the Path2Pro league.

Team Queso CEO Alvaro “Alvaro845” Gonzalez de Buitrago said, “The Clash Royale events we competed at in 2017 were huge! We hope to find the next rising Team Queso star to join us on an amazing journey this year.”

Foust said that Supercell has communicated it wants to the community to take the initiative in building itself up, and that’s exactly what Plexchat is doing. Foust wants more partners to join the ecosystem over time to help make mobile esports more viable.

“They can draw their own conclusions if we are good or bad for the ecosystem,” he said. “We believe they are open to collaboration.”