7 Billion Humans is the next game from Tomorrow Corporation, and it is coming soon to Steam and Nintendo Switch. The indie developer revealed its latest game with a new trailer that maintains the dreary, animated look of its previous hits like World of Goo and Little Inferno and combines it with the horrifying prospect of a world where machines do every job. This is the followup to Tomorrow Corporation’s Human Resource Machine.

To calm a furious population of humans who still want employment, you build a massive tower/living computer that you power by assigning people to automated tasks. With this computer, you must solve 60 levels of puzzles using 7 Billion Humans’ built-in language to program your workers. 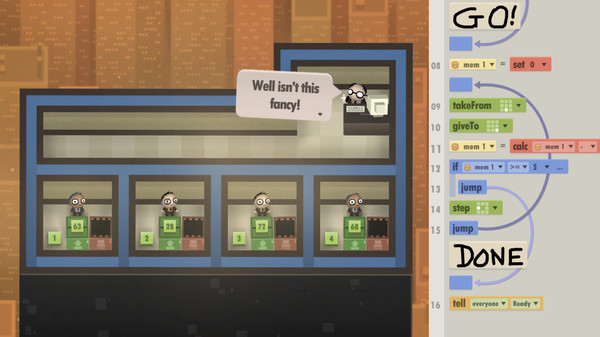 Above: Programming in 7 Billion Humans.

This sounds like our inevitable future, and I just hope that my programmer overlords leave me enough time to chug down my Soylent liquid-nutrition slurry.

Tomorrow Corporation is one of a handful of indie studios that has found repeated success. The developer has done that by remaining flexible. It started on PC with World of Goo, but that game eventually launched on every other platform on this planet. That flexibility is continuing with 7 Billion Humans. It is rolling out to PC as well as Switch at first. That makes sense because the PC reaches a global audience and indie games are selling exceptionally well on Switch at the moment. But you can expect 7 Billion Humans to eventually roll out to other consoles as well as the inevitable iOS and Android releases.

Now, if you’ll excuse me, I have to return to my place as a cog in the machine.